Did Dan “Knotts” Binde Set the Self-Supported FKT on the AT?

On July 19th, Dan Knotts Binde allegedly set a new self-supported speed record on the Appalachian Trail shortly after taking a nap two miles from the summit of Katahdin. It took him an astonishing 53 days, 22 hours and 57 minutes. Which means he hiked over 40 miles a day, for nearly 54 days straight. The previous record was held by Heather Anish Anderson at 54 days and 7 hours.

Despite contrary belief, Knotts did hike with a SPOT device, but a malfunction caused it to drain batteries every couple days. From roughly mile 300 to 1300 on the AT, he struggled to leave evidence of his coordinates in his wake. Which poses a question: If you set a new FKT (fastest known time) and no one can keep up with you while you do it, did you really do it?

I think he did. Heres why:

Knotts has already triple crowned.
After this year, he will have done so twice.

When he began thru-hiking in 2015, he hiked the PCT and the AT back to back. He entered the Sierras in April when roughly 80% of the trail was under snow. And finished the year waking up to frozen shoes in the Great Smokey Mountains. In 2016, Knott’s hiked the CDT and then kept rolling on the GDT. 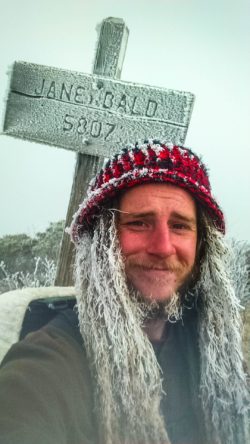 We have GPS coordinates for the first 300 miles and the last 900 miles.

Ive compiled a list of over 42 witnesses, 16 dated photographs and 13 Facebook live videos. Thats 71 shreds of evidence for a 54-day hike. This evidence accounts for nearly every day that Knotts claims to have been hiking the AT.

Social media shows Knotts hiking 62.3 miles in his first 24 hours. He hiked with open wounds on his feet for 1500 miles through the same territory where a man contracted a flesh-eating virus from open blisters.

Luckily Knotts out-ran the flesh-eating virus, but not without consequences. After kicking a rock in Grayson Highlands, his toe opened up. By the end of the day, it was already infected. 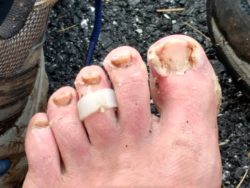 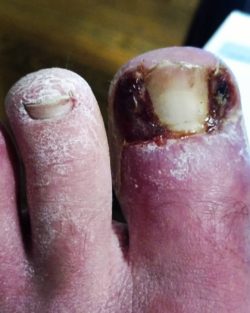 Would your feet look like this if you were hitching your way up the AT?

Even with a functioning SPOT device, its possible to hitchhike between check ins. The amount of effort it would take to stage a FKT is probably just as much as it’d take to actually break a FKT.

Why is using a SPOT device to record your FKT the standard?

Considering that SPOT devices are known to malfunction by not transmitting coordinates, and being off by several miles at a time, theyre not entirely reliable either.

Previous SPOT malfunctions have not only cost Knotts some amount of credibility, theyve also cost people their lives.

SPOTs website  states: Spot needs a clear view of the sky to obtain a GPS signal and provide the most accurate location information. It is not reliable indoors, in a cave, or in very dense woods. The Appalachian Trail is made up of mostly dense woods, using a SPOT to record a FKT attempt isnt a flawless approach. Even when your device is fully functioning, it may not transmit coordinates. Or there could be a delay in the transmission. You could still hitchhike and fudge the results of your GPS check ins.

While I understand the skepticism, discrediting a probable badass isnt cool. Whether or not he set the new FKT on the AT this year, Knotts has well over 12,000 miles of trail under his feet. And counting. While our documentation from mile 300-900 is unconventional by FKT standards, he has tons of witnesses, photos and live videos to make up for an unfortunate SPOT device. Its more likely that he did it than faked it. Knotts slayed the AT this year.