Thru-hikers returning to the Appalachian Trail after it reopened in the South following Hurricane Florence reported swollen streams, mud, and blowdowns.

The National Park Service on Sept. 18 reopened sections of the Appalachian Trail in North Carolina and Virginia that had been closed for nearly a week. Access into certain areas of the backcountry could still be affected by flooding or downed trees.

Trek blogger Ruth Morley described her first day back on trail southbound to Damascus, VA, after four days off trail waiting for the weather to clear: “The trail wasnt in as bad of shape as expected after the recent heavy rainfall, with just extra leaves and sticks in the trail. However, there were more unexpected streams and big patches of mud to avoid. The water often claimed the trail as its direct path downhill.

And Trek blogger Maximilian Armstrong, back on trail after seeking shelter in Waynesboro, VA, said he encountered high stream crossings, including “one that was raging hard enough that we had to shimmy across a log.”

“Things have settled down now,” he continued. “A few fresh blowdowns over and around the trail, and plenty of branches and debris littered about, but besides that trail conditions are decent. My recommendation to hikers passing through Virginia in the coming weeks is to be extra aware of what’s happening above them. The storm has passed but trees and branches weakened by wind and surplus in rainfall still pose a threat.”

As the hurricane gathered strength in early September, hikers heeded warnings to get off the trail before the storm passed, while hostels opened their doors for shelter and trail angels offered rides to safety. 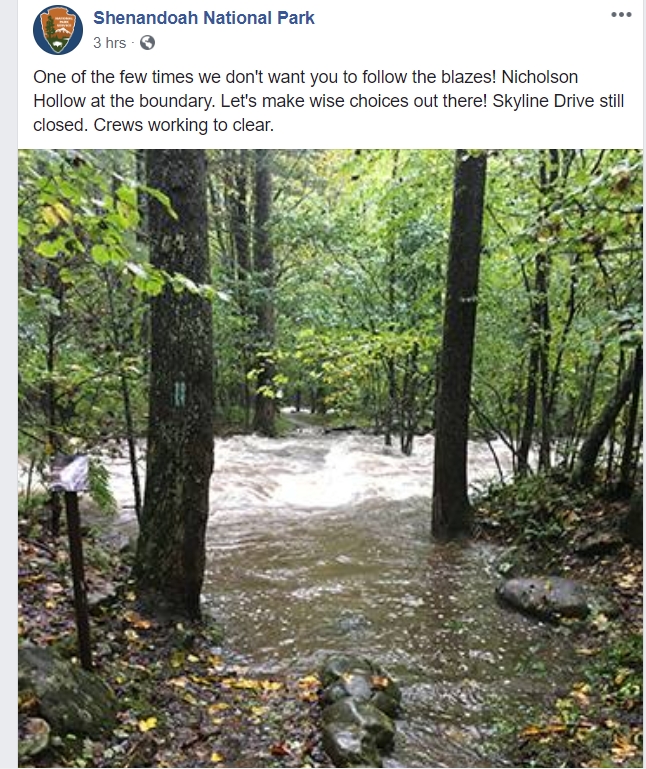 Florence, once a powerful Category 4 hurricane, weakened to a tropical depression as it pounded the North and South Carolina coasts with wind and rain.

The Appalachian Trail Conservancy advised hikers to continue monitoring conditions in the wake of the storm.

“Please use extra caution when selecting a campsite or spending time in one location, as debris may still fall, saturated soils from several weeks of rain could cause trees to uproot, and unstable surfaces could cause landslides. Water levels throughout the region are higher than normal and crossings can become treacherous due to excessive rain. Be vigilant about your surroundings and stay safe,” the ATC said on its website.

Armstrong said he and a hiking partner took shelter at Stanimals Hostel in Waynesboro, VA, “where we expect to be socked in along with a slew of others.”

“It is, given the circumstances, a good situation to find ourselves in. An affordable, comfortable hostel filled with hikers to commiserate with.”

Alexa Tubbs, a SOBO in Pennsylvania, described in her Trek blog the precautions she took in the face of the approaching storm.

“The idea is get to Duncannon before Friday when Hurricane Florence makes landfall and wait out the rest of the storm over the weekend with my trail family,” she said.

And hostels, in postings on Facebook AT trail groups, offered shelter to hikers on the AT in the South.

“Stay safe out there friends. If youre in the northern part of Shenandoah and need some help… we will for sure do what we can. Wonderland Hiker Refuge… Pm me if you need anything,” Lyric Underwood of Wonderland, ten miles north of Shenandoah National Park, posted on Facebook.