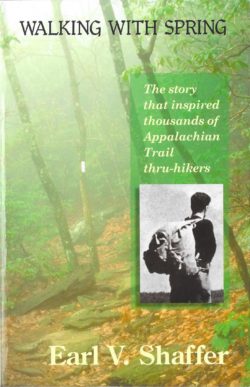 Earl Shaffer was both the first person to thru-hike the Appalachian Trail and to write about it. He completed his south-to-north trip in 124 days, averaging over sixteen miles a day, never taking a down day. As he himself noted, Three years were to go by before Gene Espy duplicated south-to-north trip, and Chester Dziengielewski and Martin Papendick completed the trip north-to south the same year. That year was 1951, years before NOBO, SOBO, and thru-hiker became part of the AT nomenclature.

Shaffer completed his second thru-hike, SOBO, in ninety-days in 1965. The story that inspired thousands of Appalachian Trail thru-hikers, about his 1948 thru-hike but with the hindsight of 1965 thru-hike, was privately printed in 1981. He entitled it Walking With Spring because he had come to the woods to walk with spring and followed springs arrival in the Appalachians as he hiked NOBO.

The first AT thru-hiker hoped to average twenty miles a day but was willing to settle for fifteen. While backpacking, he calculated that it took him about two thousand steps to cover a mile, or a stride of a little over two and a half feet. He once backpacked four miles in fifty-five minutes, an incredible pace I would be challenged to emulate as my best pace is a mere three miles an hour and I average far less even without a full pack.

Shaffer was ahead of his time. Just as The National Outdoor Leadership School (NOLS) was pioneering and perfecting minimum impact camping, which later morphed into Leave No Trace (LNT) principles, Shaffer reflected on his 1948 thru-hike by writing, When I left, the signs of my presence were so slight that the next rain would remove them. Like the Indians, I say Where I go I leave no sign. P. 130. It would be decades before others would consciously adopt such practices and principles.

The author was also somewhat prescient, opining in 1981 about development along the AT and writing, The encroachment that once seemed overwhelming must be stopped if the Appalachian Trail is to survive. P. 110 Here we are, nearly seventy years after Shaffers first thru-hike and more than thirty-five years after he published Walking With Spring, and we are still struggling to stop encroachments such as the Mountain Valley Pipeline.

Reading the 2004 fourth printing of a facsimile reprint of the 1981 edition of Walking With Spring, published by the Appalachian Trail Conference in 1983, was a humbling experience. Shaffer hiked with a heavy and bulky Mountain Troop rucksack weighing an average of forty pounds fully packed, increasing to sixty pounds for the final stretch through the Maine wilderness. Yet decades before ultralight backpacking became a modern mantra, Shaffers motto was, Carry as little as possible but choose that little with care. p. 9. He later opined, a long distance hiker must choose between traveling light and not traveling at all. p. 27. I doubt forty, and certainly not sixty pounds would qualify as little as possible by todays ultralight standards. Yet Shaffer persevered. I doubt I would have fared as well.

I would be hard pressed to keep up with Shaffers pace even if I did not average in my down days, which he did not take. I would be equally challenged to do what he did with the gear available to him, relying instead on aluminum, nylon, and other light weight gear easily available today but not in 1948.

At 152 pages long, Shaffers writing pace is a little over 13 miles a page. Evan at that brisk pace, however, I was able to enjoy the Native American legends and lore, local history, and references to American woodsmen such as Boone, Crockett, Carson, Wetzel, and others that he sprinkled throughout his work. Even though sections of the AT have been rerouted since Shaffers first thru-hike, and I have never thru-hiked the AT, I have backpacked enough of it to enjoy his descriptions of locations I have myself visited, such as Fontana Dam, OId Rag, The Chesapeake and Ohio Canal, Swatara Gap, Hawk Mountain, the Delaware Water Gap, Tammany Mountain, Sunfish Pond, North Conway and Pinkham Notch.

Shaffers book is a memoir about his first AT thru-hike, not a detailed section-by-section description of the trail or a technical how to guide to thru-hiking the AT. His prose is easy going, not flowery or forced. I am glad I finally got around to reading it and recommend it anyone who loves hiking, especially backpacking the AT.

I am a thru-hiker wannabe who has hiked sections of the AT in NH, NJ, PA, VA and NC. I fell in love with hiking and backpacking over forty years ago. Yes, I am that old! Along the way I took a NOLS Outdoor Educator Course, a LNT Master Educator Course, and two Wilderness First Aid Courses. I also enjoy sea kayaking and most recently cycling. I work part time as a Customer Service Specialist with REI. In other words, I love the outdoors and adventure.