The Appalachian Trail Needs You (and Your Sweat)

Volunteer maintainers are “graying out” and nobodys replacing them.

It took more than 1,600 miles of walking on the Appalachian Trail before it struck me how important volunteers are to keeping the trail open, healthy, and sustainable.

The epiphany struck as I was trundling down one of the steepest half-mile sections on the AT toward Vermont Route 9. It was pouring rain, and I was immensely grateful to the anonymous laborers who had built a series of stone steps out of monolith-sized boulders.

How in the world do they get these things into place? I wondered. 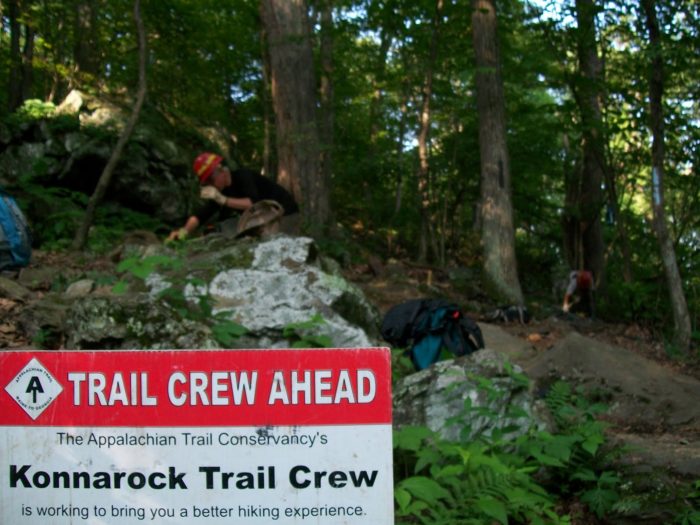 Nine months later, strapped liked a mule to a 600-pound chunk of granite on Yellow Mountain near the Georgia-North Carolina border, I finally got an answer: inch-by-inch, via teamwork, with plenty of thick, mud-grimed yellow webbing, sheer muscle, and lots of grunts and groans.

Five guys hoisted the rock a few inches off the ground as I drove my legs into the ground, tugging the boulder (dubbed Fred) a few feet forward. A dozen lung-busting tugs down the trail, and we were ready to maneuver it into position, just one of several equally enormous rocks needed to build a single French drain on one, tiny section of the 2,190-mile trail. 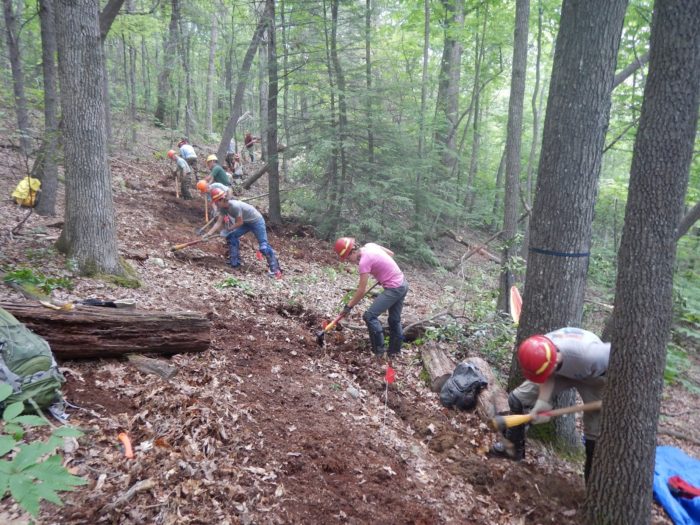 Although the AT is jointly managed by the ATC, the National Park Service, the U.S. Forest Service and numerous state agencies, it is maintained almost entirely by volunteers. Indeed, some 6,000 volunteers working with the ATC, the federal agencies, and 31 maintaining clubs provide about 270,000 hours of service on the trail annually. Thats close to 110 volunteer hours per mile of trail, every year.

Simply put, without volunteers, there would be no AT (or PCT or Colorado Trail). Thered be nobody to saw through last winters blowdown. No one to fend off the fast-growing sourwood, greenbriar, poison ivy, or multiflora rose that threaten to engulf the tread. No sturdy bodies to bust up rock, haul boulders, build steps, and rebuild washed-out sections.

All long-distance trails depend on volunteers to keep them open and them well-maintained, says Josh Kloehn, resource manager for the ATCs Central and Southwest Virginia Regional Office. Having a good volunteer capacity is important for the ATC, the Forest Service, the Park Service, and all the clubs. Without volunteers, its hard to imagine what the trail would become.

But while working with Konnarock over the past two years, Ive heard the same, unsettling story from members of local maintaining clubs who join us: Longtime, dependable members are graying out, having to cut back or retire from trail work, and new, younger members arent taking their places. 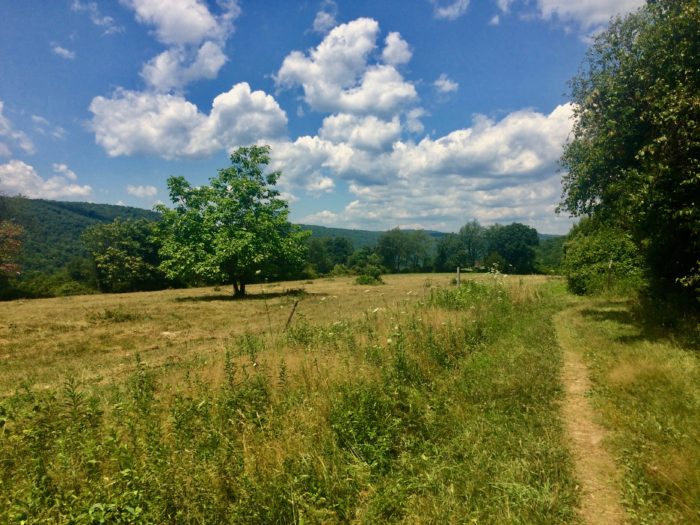 Volunteers are almost entirely responsible for keeping the AT clear for hikers, as with this section of trail near Kent, CT. Photo: Clay Bonnyman Evans

It makes sense that a lot of our trail maintainers are retired individuals, because now they have the time, says Kim Peters, 62, trail maintenance coordinator for the Tennesee Eastman Hiking and Canoeing Club, which has helped maintain and relocate some 135 miles of the AT, from Damascus, VA, to Spivey Gap, NC, since the 1940s. But weve recently had several long-term active maintainers age out and they can no longer be active. The crux of the issue is that were not seeing younger people come in to replace them.

Peters jokes that once you take a job with the TEHCC, its yours until you die. She notes that the man who leads the clubs weekly work trips is now in his 70s.

Hes extremely fit and active, but I see him slowing down, she says. If we lose him, thats done.

The ATCs six summer trail crewsKonnarock, the flagship crew, 36 years and counting; Rocky Top, which works in the Smoky Mountains; S.W.E.A.T., the Smokies Wilderness Elite AT crew; Maine Trail Crew; the Volunteer Long Trail Patrol in Vermont; and the Mid-Atlantic Crewhave been successful at recruiting younger volunteers, despite (or perhaps because of) their well-earned reputation for putting in long, hard days.

College service groups and projects from as far away as Missouri and South Dakota have in recent years helped fill Konnarocks early-season rosters. All they have to do is get to the crews base camp in Sugar Grove, VA, and the ATC does the rest: food, transportation, tools, and camping gear if necessary. About half of the ATCs crews qualify as youth (under 30) while a third are retired.

The rest are middle-aged folks who are able to take time off work, Kloehn says.

The ATC actively encourages volunteers to use newly acquired skills beyond crew weeks.

We love to get younger folks involved and experience the opportunities, then take it back to their states to give back on other long trails, whether it be the PCT or CDT, or even their local city or county parks, Kloehn says.

But the heavy-duty work done by ATC crews doesnt always translate to the lighter (but just as important) work done by maintaining clubs. Many volunteers return to work on ATC crews, but few seem to join local clubs.

The AT Needs You! 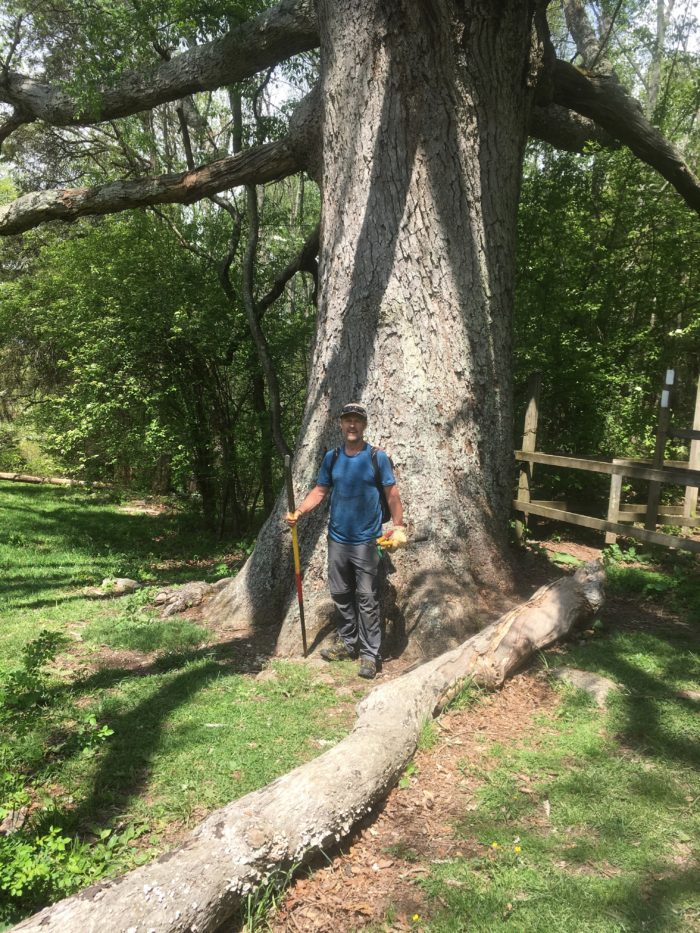 The author pauses for a photo with the Keffer Oak near Sinking Creek Mountain, VA, on his way to work for the ATC’s Konnarock Trail Crew.

Both the ATC and local clubs have tried different approaches to bring in new blood, with mixed success. The ATC and Roanoke Appalachian Trail Club, for example, created a meetup group, and the ATC and TEHCC hosted hiker happy hours in Damascus.

We probably got six to eight volunteers from that, says Kloehn, who helped lead an introductory workshop on trail maintenance for potential recruits. Given all the staff time and ATC promotion, was it worth it? I think thats a judgment call.

Some local clubs, including the Georgia Appalachian Trail Club and the Carolina Mountain Club, simply require all members to participate in a minimum number of work hours to maintain membership, Peters says.

And in an effort to cash in on the goodwill and sturdy muscles of thousands of annual AT thru-hikers, Bob Peoples, 73, the famed founder of Kincora Hikers Hostel in Hampton, TNwho has logged more than 8,000 hours of trail volunteering since retiring from the Air Force in 1988established the Hardcore crew. Hardcore recruits current-year thru-hikers at Trail Days in Damascus for several days of hard labor. Konnarock took over Hardcore in 2016, putting 30 hikers to work for two days before they continued on their way.

But even as the volunteer corps continues to age or drop out, changing climatic conditions will only continue to accelerate the need for more volunteers. In the West, for example, pine-bark beetle infestations have caused a 70 percent kill rate on timber in some sections of the CDT, and the emerald ash borer has killed some 40 million trees, including along the AT. Dead timber will, at some point, become blowdowns, and if there arent enough people to clear it, trails will become all but impassable.

Given the need, Peters would love to see every AT hiker pledge to give back to the trail, even if its just a day or two a year, and on a different trail.

If everybody donated just one day a year, it would be awesome, she says. If all the people who hiked would just, after their hike, volunteer one day, that would be so helpful. This work is fun and extremely rewarding. If we expose enough people, its going to take with some of them.

Volunteering is hard work, but its also a great way to experience the trail, for newbies and old hands alike. In many ways, my hitches with Konnarock have been a distilled version of my 2016 thru-hike: hanging out in the woods with people from diverse backgrounds, pursuing a common goal, working hard, and forming close bonds in a remarkably short period of time.

You meet great people who want to be there not because its their job, but because they want to give back to the trail, says Bob Cool Breeze Fennelly, who has worked on a dozen Konnarock crews since 1986. Everyone who hikes the trail does some damage, and if we love the trail, and want it to be there for the next generation, we have to do something to make it better.

Want to give some love back to the AT? Learn more about volunteering with an ATC trail crew or an AT trail-maintaining club.