Why a person would quit their job, leave their home, say goodbye to their family, and choose to spend half a year backpacking the length of a long trail is a pretty fascinating question. Most thru-hikers have three versions of their answer. The joke answer, to be used when day hikers ask on a day you’re trying to crush miles and don’t have the time. The terse answer, to be used when the 18th family member has asked over Thanksgiving dinner. And the long, honest answer, that’s told around campfires and mulled over constantly as miles slowly pass by.  Godfrey Torrance decided he was interested in the latter and hit the Appalachian Trail to collect as many of those long, honest answers as he could, compiling them into the documentary White Blazes – Stories from the Appalachian Trail. He interviews an ambitious number of aspiring thru-hikers as well as some long trail experts to do as thorough a deep dive as possible into why people choose to thru-hike.

The resulting documentary reminds us that while each hiker has their own unique path that leads to their first steps on the AT, the reasons that keep them out there have more in common than not.

What was the inspiration for this project? What drew you to the AT specifically? 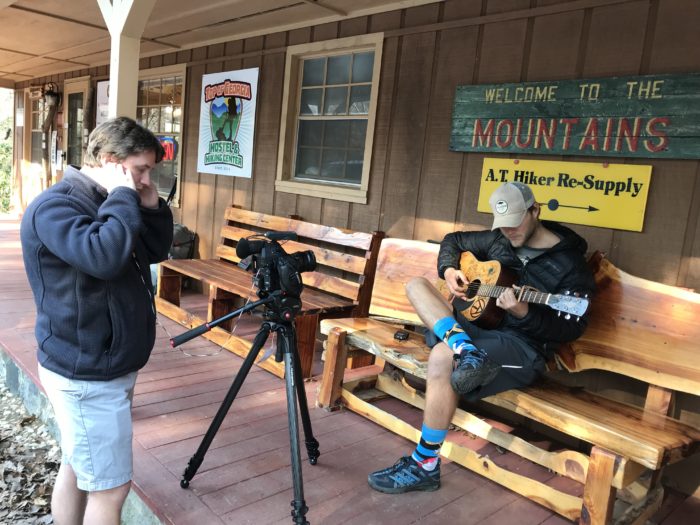 During my last semester in film school at the University of Alabama I took a documentary class with an excellent teacher who turned me on to documentary filmmaking, something I had never done before until I took his class.
My family and I have a cabin in Dahlonega, Georgia, and growing up I hiked many parts of the trail in North Georgia. it seemed that every time we were hiking and spoke with people, they had an interesting reason they were hiking the trail, and that is the story we wanted to tell. So it started out just wanting to collect all the different reason people were out on the trail, but in the process, it turned out to be about how it changes people’s lives and makes them a part of this AT community.
The reason for the AT specifically is it is the premier national scenic trail for thru-hikers on the east coast. The proximity also to where we live helped keep the costs down because we basically had no budget.

How did you choose your interview subjects?

All the hikers in the film were random. We just went out to hostels, shelters, and randomly on the trail and simply asked, “why are you hiking?” We picked Sunny, who is the narrator of the film because we needed an expert, long-distance hiker. we also wanted to interview someone who ran a Hostel, which is where we got Bob from Top Of Georgia Hiking Center.

While you interviewed some hikers who had hiked the entirety of the trail before, the current thru-hikers you interviewed were in the early stages of their thru-hikes. What instigated that choice, and have you been able to keep track of where their hikes ended up taking them?

When the filmmaking process was first starting out, we wanted it to be about a few specific hikers and we were going to keep track of them. As the film progressed, it turned into not being about a specific hiker, but instead what happens to hikers in general in the hiking community. So the film turned into Sunny’s three wise men: The Physical, The Mental, and The Spiritual aspects of what a hike is, as well as how this community is created.  There are already many films out there of people who hike the trail and how they did it. I wanted to know why.

Was there any moment from any interview that really stuck with you? Something a hiker said that made you go “whoa”?

At 32:27, one of the hikers (Stepping-Wolf) says, “If I had this all planned out and I need to be here then and there, that’s a vacation itinerary, that’s not a journey.” That stuck out to me because it’s true. It’s what the documentary is about. It’s not about how to plan a hike, how to hike in general or anything like that. It’s about what happens on that journey.