The Beginning of the End

I want to remember it all. Every moment, smell, sound, all the feelings I felt – the smiles and tears. I did the thing I never thought I could do, and even though it was new, it felt just like home. North Brother, Hamlin, and Baxter. They were the final three peaks on a list that was made by men. Men who try to encapsulate the wonder of the wilderness on paper, a daunting task to take on. From the moment I crossed into Baxter State Park my mind was focused. There was a task to accomplish and forecasts be damned I was going to summit my final three peaks. This is what I was made to do; this was what I had trained for. 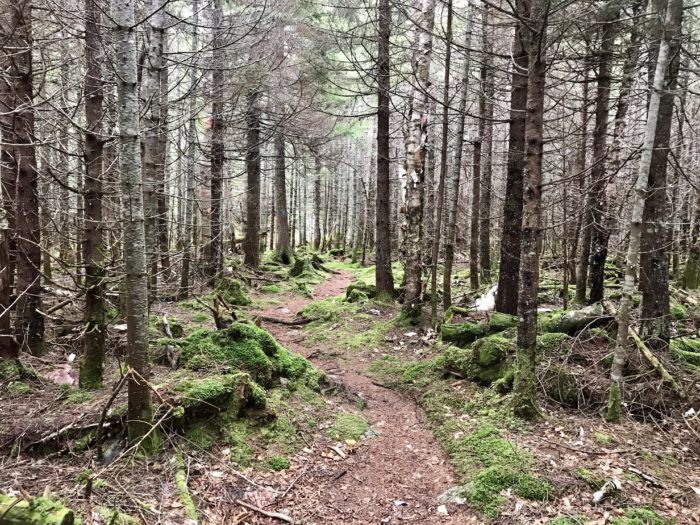 I pulled into the trailhead of North Brother, signed the trail register, and set off on my own. The familiar feeling of rocks and roots under foot, the sound of my trekking poles clicking off the stones and the smell of heated leaves and dirt blowing on the breeze. It was home; it’s always home when I’m in the forest now. Hours went by and even with only four hours of sleep and six hours of driving I was focused. The summit of North Brother loomed in the low-lying clouds and welcomed me. I took a deep breath in and slowly let it out. With it I expelled all the stress and anxiety of the moments leading up to this. The final push to the summit felt so familiar, just like the pushes to the tops of dozens of other mountains I’ve climbed.

But this time at the top it was different. I stopped, sat, and I breathed. Calm washed over me. The need to rush down wasn’t there, because this was home for now and I could stay as long as I wanted. The clouds blew over and The Greatest Mountain came into view.

The final peak greeted me, and I smiled. 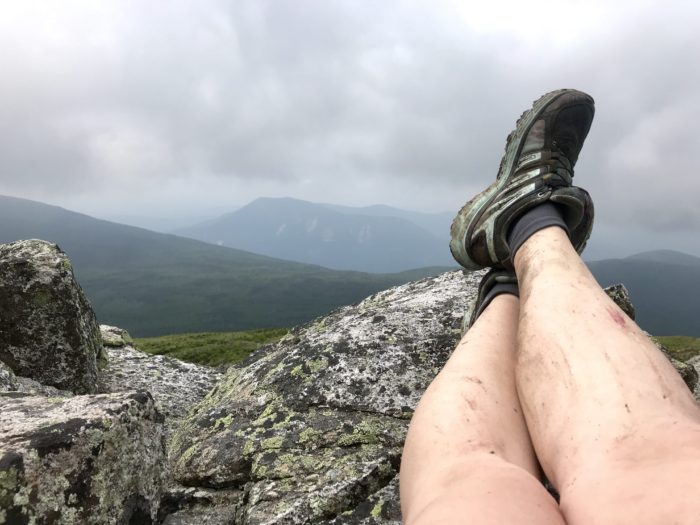 At camp that night the heat and black flies were overwhelming. I set up my tent, got out my stove, and made my dinner. My clothes lay drying in the heat and the cicadas called on the breeze. The winds were changing and the warmth of summer was slowly being pushed aside by the cooler nights of autumn. The gentle nudge of one season was replacing another. After dinner I walked along the road and visited the creek that my site gets its name from. It’s a name given to it hundreds of years ago by the people who used to possess this land.

Nobody really possesses the land, though, they just borrow it for a lifetime.

Back at camp I climbed into my little cocoon, stared up at the sky, and slowly drifted off to sleep. I woke up in the middle of the night and looked up at the stars. Then I slowly glided back into sleep. 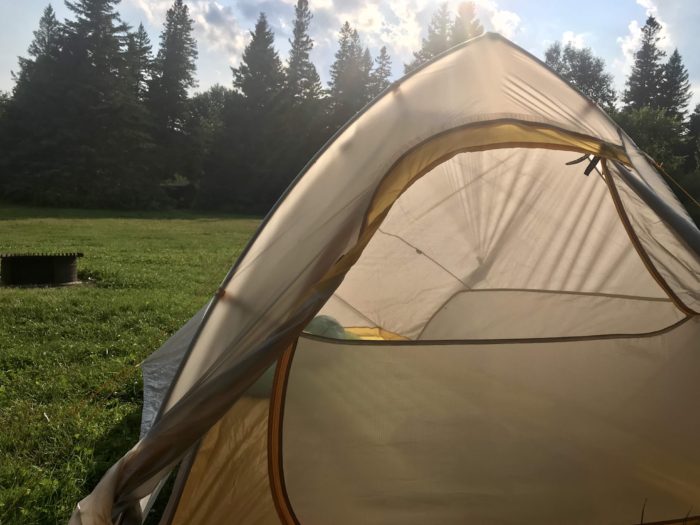 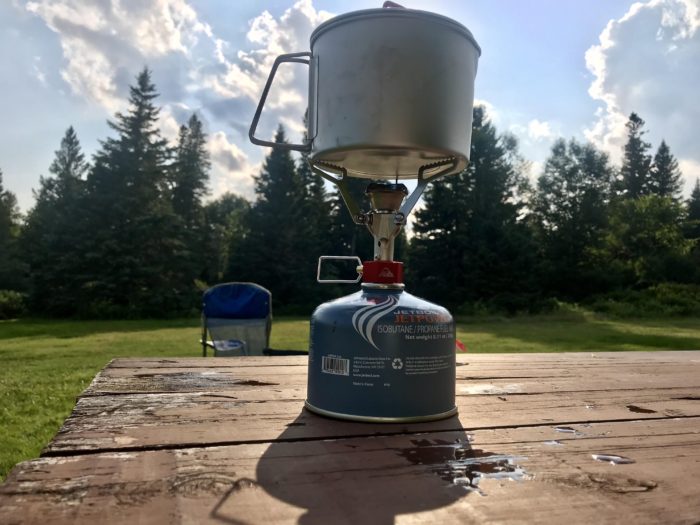 This was the day I’d been waiting for. I woke up early, packed up camp, and hit the road. The clouds rolled overhead and the possibility of rain hovered in the air. At the trailhead I signed the register and was warned, as were so many others, that there was a 90 percent chance of thunderstorms with lightning today so plan accordingly.

There were four miles of trail above treeline that I would need to hike and no places to get out of the weather if a thunderstorm hit. 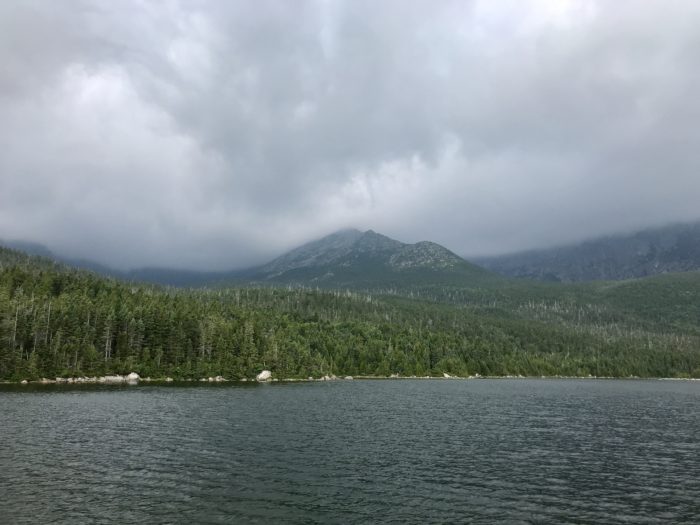 “This won’t be the day I summit,” I told myself as I set out. I took only two photos on the three-mile approach to Chimney Pond, because I was convinced this wasn’t going to be the day I summited Baxter. I took a break and fueled up because even though I didn’t think this would be the day I summited Baxter, I have to at least try to reach Hamlin. The park ranger had me sign in and, again, told me that there was a 100 percent chance of thunderstorms. She said to play it by ear and if it looked bad when I reached the Tableland, to turn around.

So I set off. Still not sure if I’d make the final push to Baxter Peak, I had to at least try for Hamlin. I drifted back into my mind and my body went back into auto-pilot. I searched for potential places to filter water on the descent, drank from a natural spring, and climbed over boulders. The scree slid down the trail under my feet, and I pushed on. 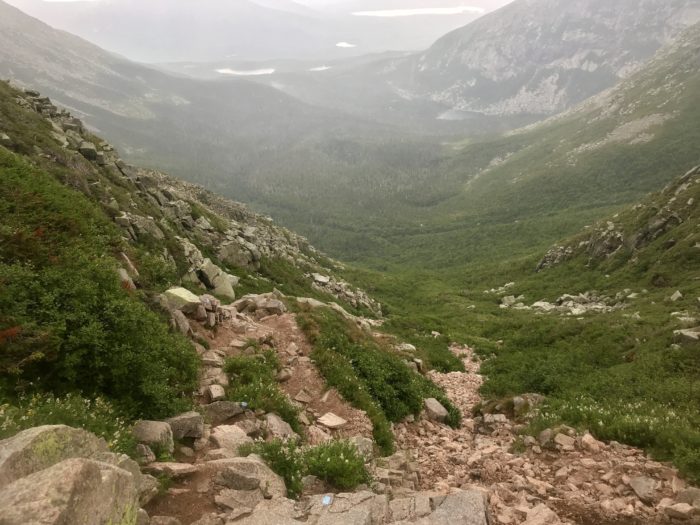 The moment I hit the ridge I was welcomed by a continuous 30-40 mph wind. But I wasn’t phased anymore by the winds that used to frighten me, the ones that left me frightened on Franconia Ridge back in January. I put in my earbuds and I set off into the clouds. Finding the summit of Hamlin proved somewhat difficult. Visibility was low due to low-lying cloud cover and I had to rely on my map and GPS to locate the trail junction leading to the summit.

I reached the summit of Hamlin, took a few pictures, still not convinced I’d summit Baxter, and turned right back around. I didn’t stop to rest. I barely stopped to catch my breath. Now my mind is fixed on Baxter. One mile back to the trail junction and I finally stopped to decide if I should push on or go back down the saddle. I’ve become good at reading clouds after spending so much time in them and I saw no signs of approaching storms.

“So this is the moment, this is when it happens” I said to myself,  and a smile broke out across my face. 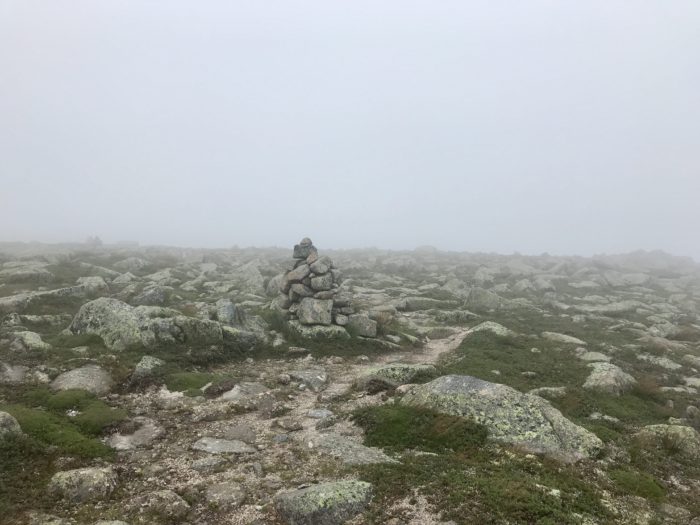 The trail was steeper approaching Baxter and I was tired. I hadn’t been fueling myself or resting much since hitting the ridge so I was going slow. This was the time to focus on getting to the top; there was no time to stop now. The summit was in the clouds, there was no way of knowing when I’d reach it, nor did I know what it would look like; but I knew it was there somewhere, just out of reach. The trail started to get steeper and steeper. It was relentless and I was so tired and sore, but I knew that I must be getting close.

Then, slowly in the distance, I saw the shape of the sign come into view through the clouds. It loomed ahead of me as I climbed over the crest of the mountain and became clearer and clearer. It was the sign, not my imagination, so I got out my phone and started recording. The final moments, the final push to the summit, 40 seconds of bouncy film later and I’m at the top. It’s all over but I still feel the same. There were no tears, just smiles and slower breaths. I took photos, I stopped and spent some time on the top, and then I headed back down. 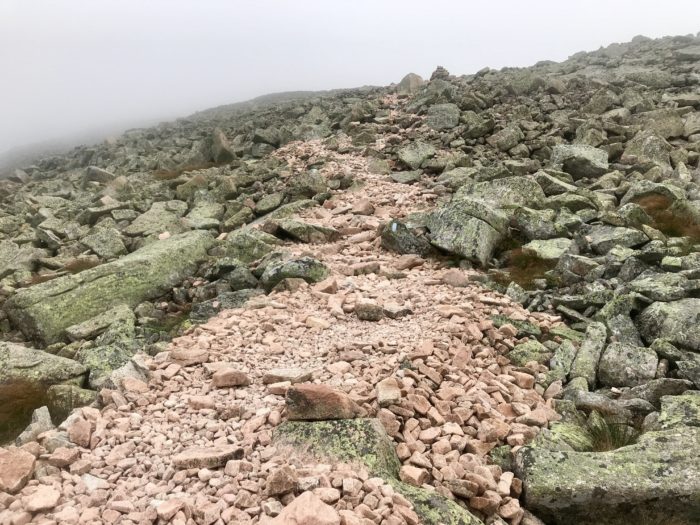 As I reached the saddle between the two peaks I assessed the clouds. They were sitting higher in the sky and threatening rain. Big fat drops began to fall and a clap of thunder ran through the air. My steps became quicker and as I climbed down into the saddle, the rain came in earnest. It didn’t matter anymore, the rain or the clouds, because it was over, and I had made it.

I had climbed The Greatest Mountain.

Even though it still wasn’t real, it was still just another hike, deep down I knew it was done. I didn’t process what it meant to finish; I didn’t have time for that yet. First I had to focus on getting down the mountain. Then, as I reached Chimney Pond, the clouds lifted and the sun came out. It was meant to be my day to summit and the storm held off just long enough to let me.

It took me hours of driving home to finally begin to process what I’d done. It wasn’t until I reached my home state that I really felt it all, all the feelings that I’d bottled up inside over the past few hours. Because there wasn’t time for feeling, only for hiking.

I smiled so hard and tears poured down my cheeks and I laughed aloud because I did the thing I never thought I’d do. I climbed The Greatest Mountain, I slept in my tent alone, made my meal on my stove, dried my clothes in the sun, all on my own. 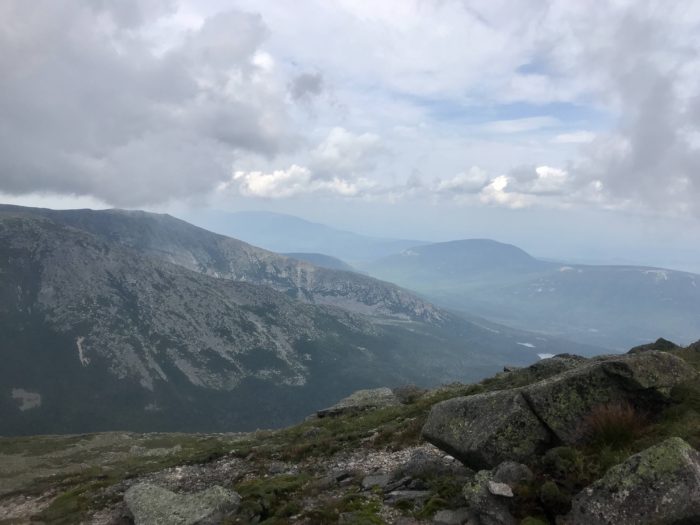 So do I feel different now that I finished the New England 67? Am I transformed, made new, stronger than I’ve ever been, wiser, smarter? Yes, I do feel different, but not because of that one hike or because of finishing that one list.

Looking back on all the hikes I’ve done this year, all the trails I’ve been on and all the miles I’ve spent in the woods, it isn’t one hike that made me who I am today. It’s a compilation of all the miles, the hours and hours spent in the woods alone. Each and every one of those mountains taught me something. They took a little piece of me, each and every one, but replaced those holes with pieces of themselves.

I take with me every mountain I ever summited, I hold all of those little pieces close, because all of those mountains made me who I am now.

So what do I do now that I’ve finished the 67? I set out into the woods again, only this time I go back home, to the mountains that feel so familiar to me. They welcome me back into their arms as I step into the dark and overgrown forests. They reach for me with their branches, embracing me in a hug, and I smile hard and breath deeply because this is where I belong. 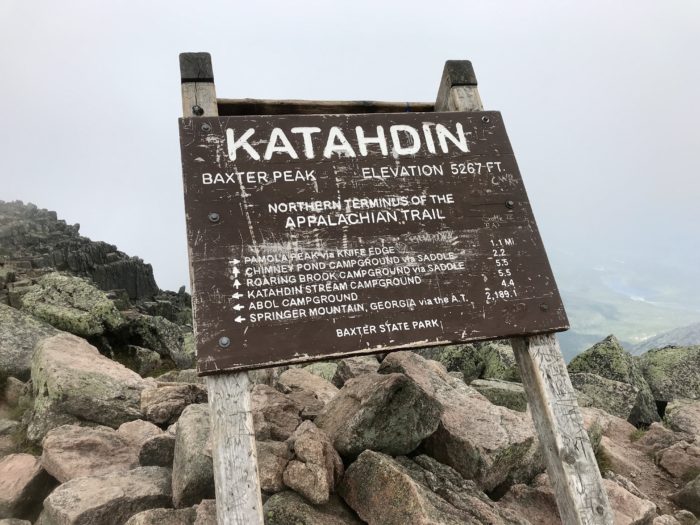 Hikerchick located in the White Mountains of New Hampshire. I've completed the NH48, NE67, and am working on round 2 of the NH48.