Late last fall I was given the opportunity to test the new Sierra Designs High Side solo tent before it became available to the public. On top of everything else, it was great timing for me as I was in the market for a new tent as my existing solo abode (Big Agnes Copper Spur 1) was showing its age after around 2,000 miles of use. On the other hand, the timing wasnt so great in that it was late fall and matching time available to go backpacking with reasonable weather might be difficult at best.

While waiting for my window of opportunity to open, I was able to compare the tents specs and ease of set up in the yard.

The first thing I noticed when I opened the package was how small it was. The Sierra Designs High Side was packed in a compression sack that was only 13 inches long. This could be pretty interesting, I thought to myself as I popped open the buckles. 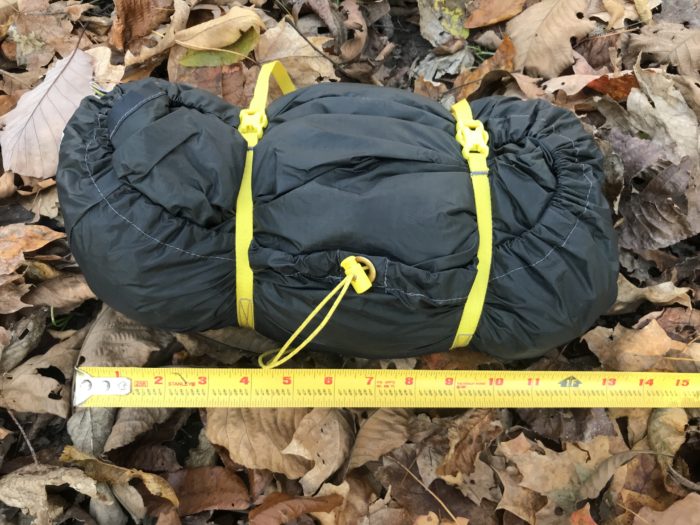 Tent, fly, poles and stakes all fit in the compression sack

I compared the High Sides specs to several existing models including the REI Quarter Dome, Marmot Eos 1, MSR FreeLite and my Copper Spur. The tent itself is relatively light compared to its peers despite being constructed with similar weights of material. The minimum trail weight (Tent, fly and poles) is 1 lb. 14 oz. Because its not self-standing, it can mean bringing a lot of stakes. The High Side comes with 13 aluminum stakes which pushes its packaged weight to 2 lb. 6 oz. Heres a case where the purchase of titanium stakes could cut several ounces from the owners pack weight.

The interior provides 18.5 square feet of floor which is near the middle of the group. The 7.7 square feet of vestibule is smaller than the others, but not by a large margin. The tent appears to have found some of its weight savings with a lower 32 peak height. The others range from 36-42. 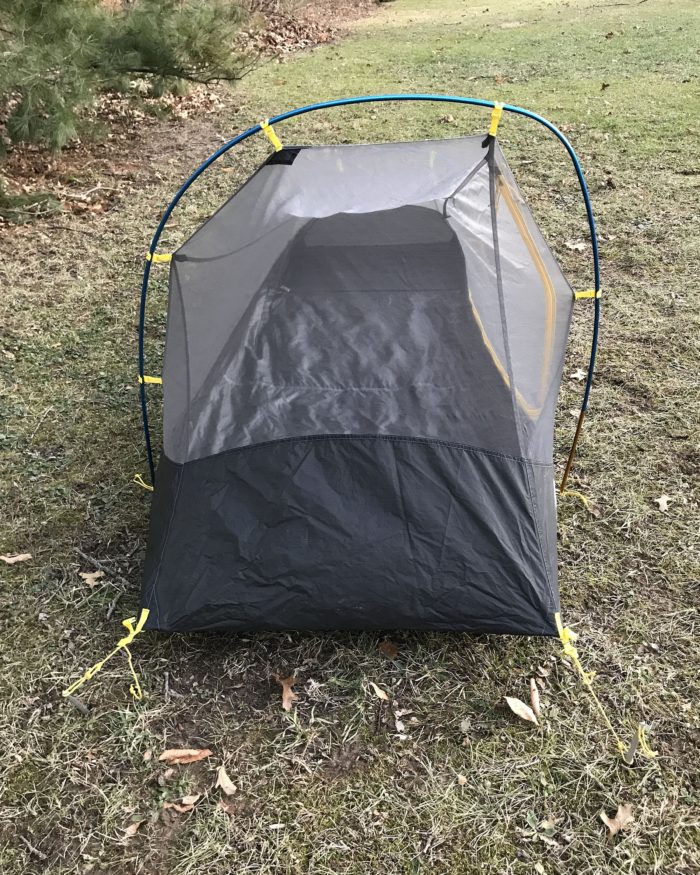 Out in the yard, the High Side was a quick and intuitive set up. The poles are pre-bent to raise the tent peak to its highest point near the door (thus the name High Side). The door zips open along the side and floor and can be rolled up out of the way into the peak. Personally, I found that to be an improvement over other tent doors that hinge at the floor where I generally step on them. The vestibule has two zippers which provides multiple options for coverage including as an awning with the use of trekking poles. Using a dozen stakes and the enclosed adjustable guy lines, a taut pitch was pretty easy to accomplish. Takedown was also pretty straightforward and everything easily fit back into the well designed pockets and compression sack. Overall fit and finish was excellent. It was obviously well made. Now, all I needed was a break in the weather for a real-world test. 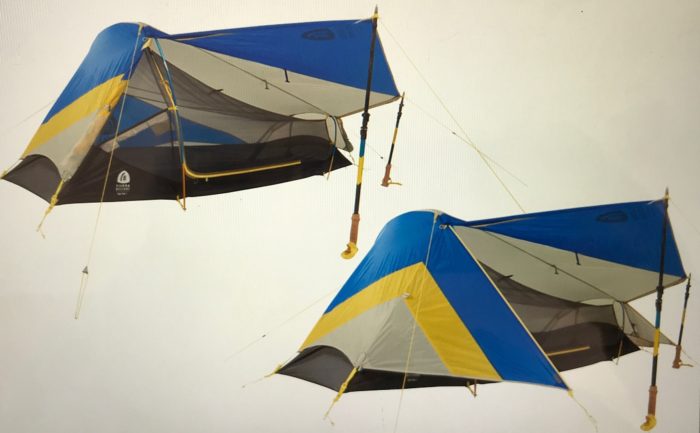 Soon it was December and I was running out of time before winter really set in. The forecast wasnt looking good with the pick day of the week set to have a high temperature of 40 with overnight lows expected in the high 20s. Not great, but the best for the foreseeable future, so I decided to head out on a relatively local overnight; the Backpack Trail at 4,900 acre East Fork State Park. The 15 mile lollipop loop has a couple official camping areas on it, including one at the most distant spot. Thats the one I was heading for.

After parking in the otherwise empty trailhead lot, I spent the afternoon hiking 8 miles out on the trail. With partly cloudy weather the temperature peaked around 40. A couple creek crossings involved rock hopping, but most gullies were bridged. For the most part, the trail was either flat or rolling, going to great lengths to avoid steep drops and climbs by skirting several of the creeks feeding Harsha Lake. Even with some extra clothes, my pack was almost buoyant due to going stoveless and, the lighter than I was used to, High Side Tent.

The sun was setting by the time I arrived at the camp area. There was ample flat area to set up the High Side. Since the light was fading, I kept the area inspection short and hustled to set up camp. 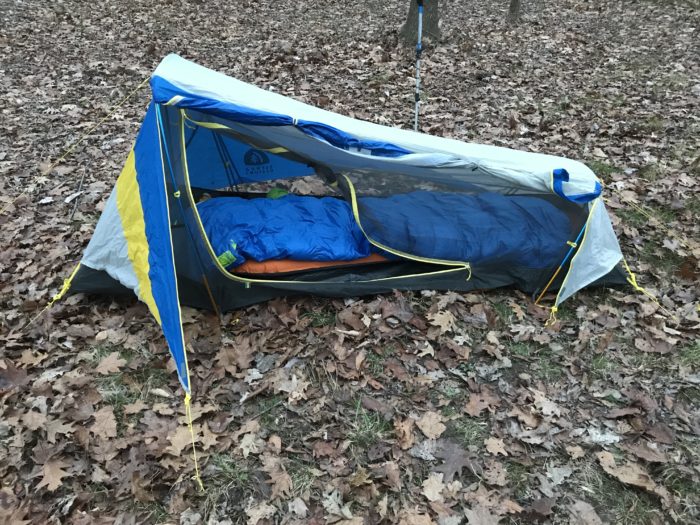 The tent staked out easily and was quickly up. The large door opening eased the insertion of my pad and sleeping bag. The fly attaches to the tent with buckles at each corner, then guylines were staked out and tightened. The process was quick and easy despite dropping temperatures and light levels. Some hasty scrounging resulted in enough wood for a small fire just as the last light of the weak December sun pushed up from below the horizon.

Despite filling some of the evening by tending the fire, enjoying my Subway dinner and draining a small flask, there would be a long night inside the High Side. As Im 6 3, the length was a little tight, but no more so than most solo tents Ive been in. The vestibule covered my pack and boots, so I was satisfied with that. Other items such as a camp chair and hiking poles would easily fit under the fly opposite of the door. The lower peak height was noticeable, but not to the point of feeling claustrophobic. I normally read for a bit before trying to sleep and had plenty of room for that. A single gear pocket by the door kept my phone and headlamp off the floor and accessible.

Through the night the wind rose and sleet occasionally rattled down. I was staying dry and comfortable in the tent until I heard a loud pop underneath me. My immediate thought was, Crap, my air mattress just blew out. Im going to freeze my ass off! However, a quick inspection showed that the mattress was still holding air, I had just lost some of the internal baffles. The piece was now shaped a little less like a mattress and little more like a giant football. It took some work to stay up on the cushion and off the frozen ground, but with careful positioning, it worked out fine. Thankfully the tent had plenty of shoulder width to deal with the situation.

Nights are long in Ohio in December and when I started breaking down camp at 7 am, it was still dark. I was expecting some condensation in the tent, but ventilation was good enough that it didnt happen. Rolling out of the High Side I was greeted by a light shower of ice pellets. My lightweight nylon gloves were no match for the now 20 degree cold. My fingers were frosty enough that fine motor skills became a bit difficult, but the tent still broke down without undue effort. With the conditions, I wasnt overly careful packing up, yet everything still fit easily back into the supplied compression sack. I was able to start hiking back early enough that I saw several turkeys just leaving their overnight roosts. 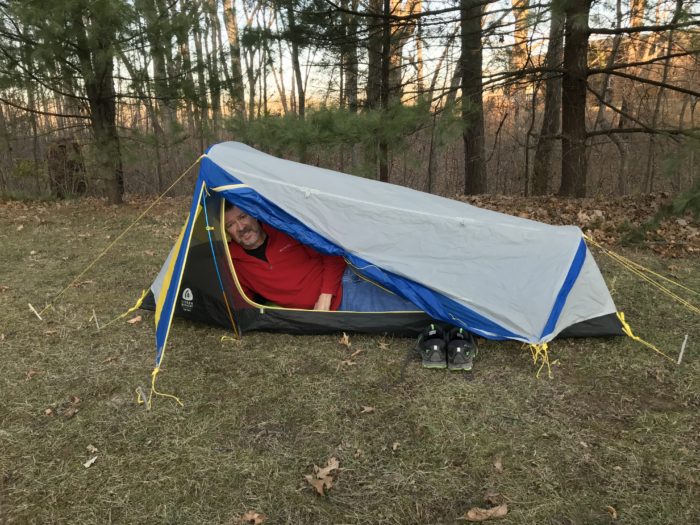 Testing how the tent accommodates a 6′ 3″ occupant.

Since that trip, more time in the High Side has only reinforced my initial thoughts. This is a well made, well designed lightweight solo tent. No tent is perfect as there is always some compromise between weight, price, durability and usability. However, Sierra Designs has done a nice job with this one and is worth putting high on your consideration list if youre looking for a new three season solo shelter.

 The small packed size is a plus. In fact, it fit into my bike panniers making it an obvious choice for bike camping.
 Overall weight is lighter than many solo three season tent options without resorting to overly flimsy of materials. Overall build quality seems high. The light weight appears to be due to a lower peak height and not being self-standing.
 Set up and breakdown is intuitive and fairly fast.
 Ventilation ranges from adequate to excellent depending upon how the double zippered vestibule is deployed.
 The suggested retail price is in line with comparable tents at $279.
 The tent is a little tight for me at 6 3, but not unusually so. Taller campers especially will want to test out this tent to see if the lower peak height will be an issue.