It was a very hard to leave Trout Lake today. The sun was shining, there was a breeze, the weather was nice, and there was plenty of good food and good people at hand. But, as I have said before, the trail does not hike itself. A lot of hikers were taking the day off; there is a growing feeling that there is no hurry to get to the end of the trail. I think it is for two reasons. First, nobody wants this to be over. Basically, in two to three weeks you have to go back to the real world. Secondly, since you can’t get to the Northern Terminus anyway, and 30 or so miles are shaved off the end, what’s the point of hurrying? I got a hitch back to the trail from a retired forester. Trout Lake has a pretty regular shuttle schedule of volunteers, running trucks out every hour or so. He told me how he used to live and work near Mount St. Helens, and did some of the cleanup after it erupted. They had to use carbide chains on the saws, else the ash would chew them up. 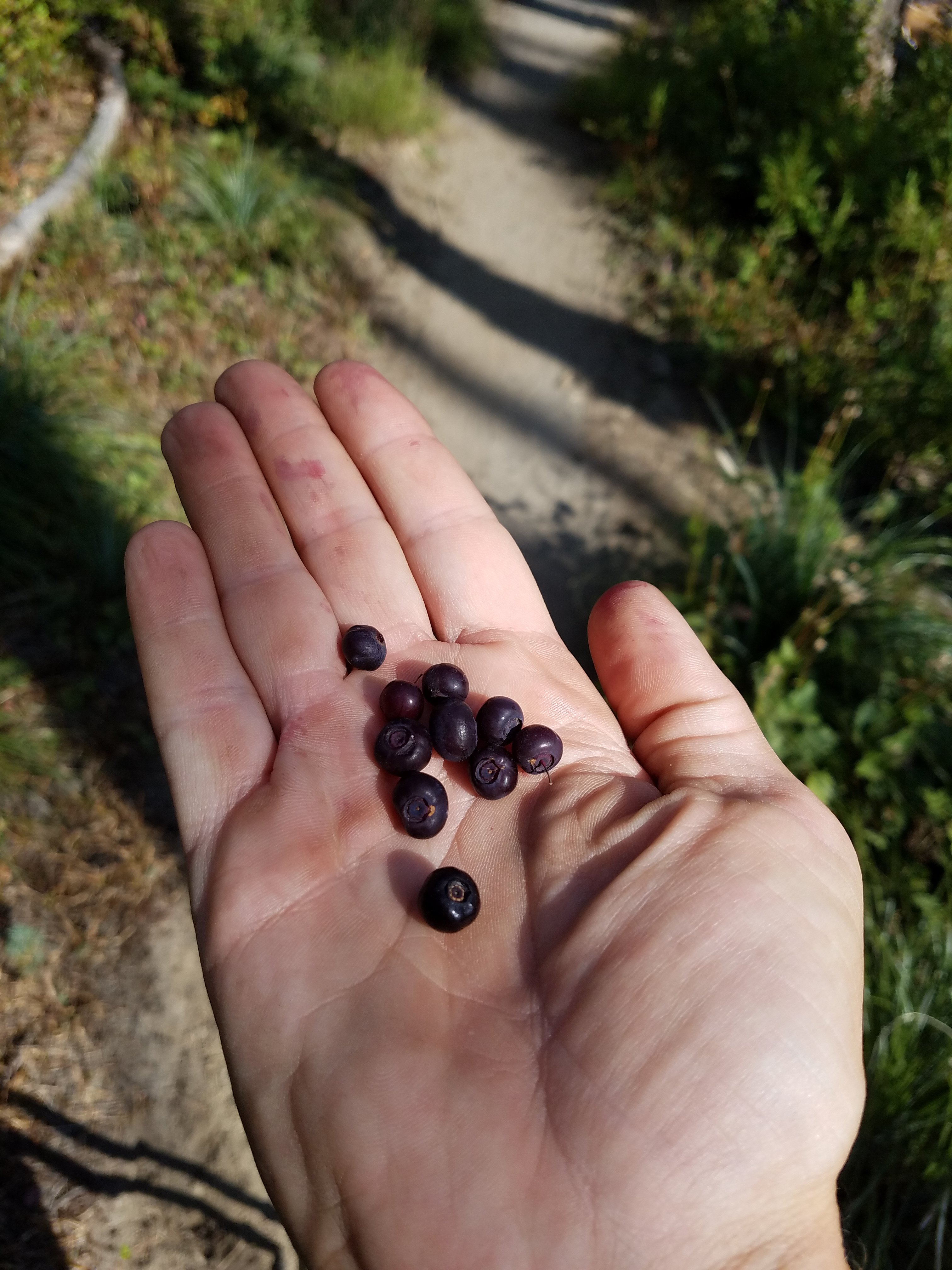 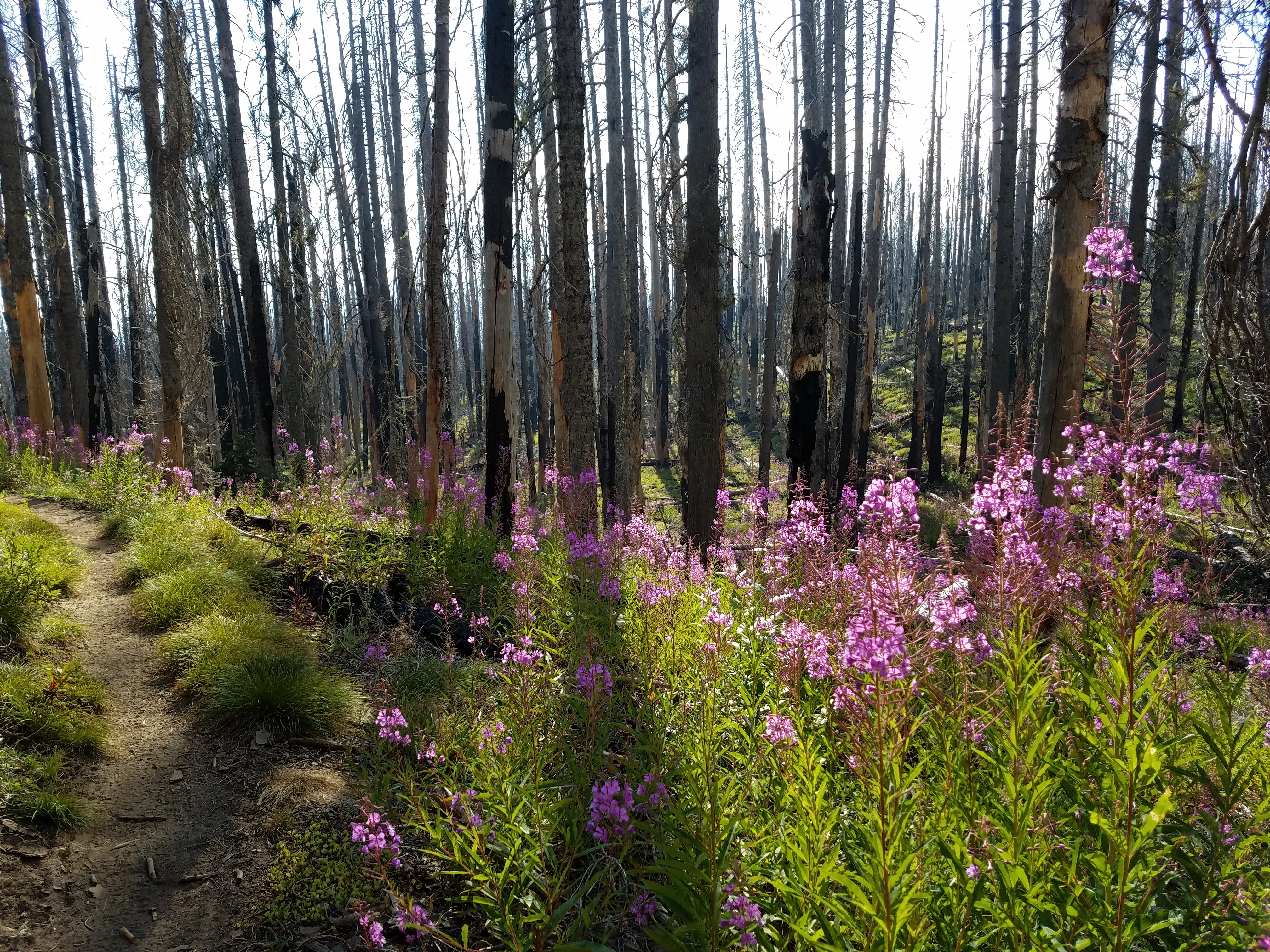 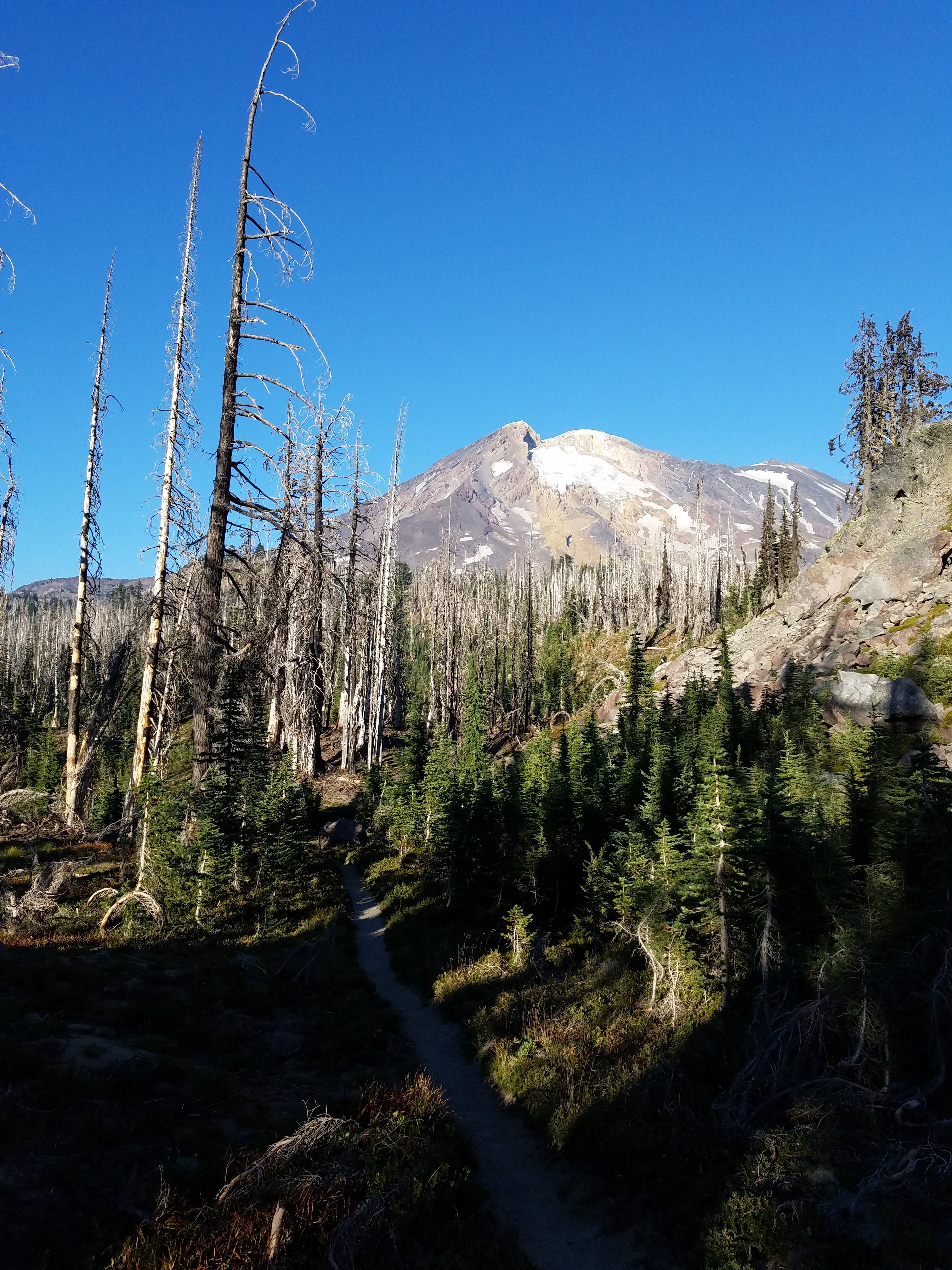 View from my tent.

Climbing up the side of Mount Adams was a series of vistas, each better than the last. I was racing the weather, which I could see rolling in as low, somewhat menacing clouds in the west. The wind was coming from the north; I think the mountain was sort of splitting the weather around it. I got most of the way to my planned campsite when I realized that the sun would drop behind the clouds, and the temperature  would drop along with it. I have no cold weather gear at the moment. Plus, I had no idea how many people would already be at the site. So I did something that I have not done in a long time, I simply found a good spot 100 yards off the trail and set up my tent. Nobody can see me, and I found a nice sandy place high in a wash where my tent footprint will not be too destructive. Tomorrow I enter the famous Goat Rocks Wilderness. People claim that the views rival that of the Sierra. I will get to see a good portion of it before the trail is rerouted due to fires. 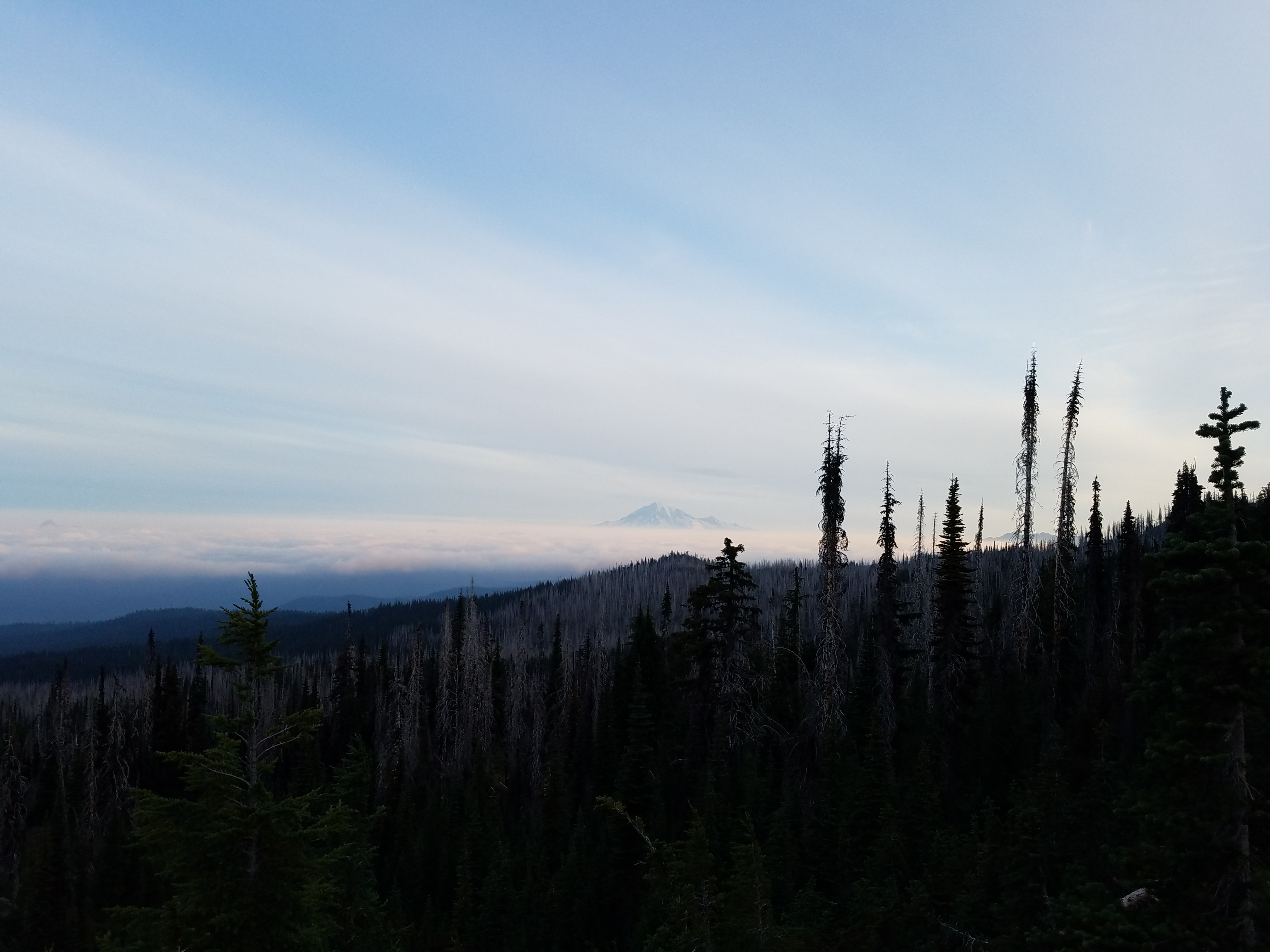 I spent the morning walking around Mount Adams, a dead/dormant volcano. Although not completely dead, and there are fumaroles high up, giving some of the streams a nice sulfur stink. And by nice, I mean farty. 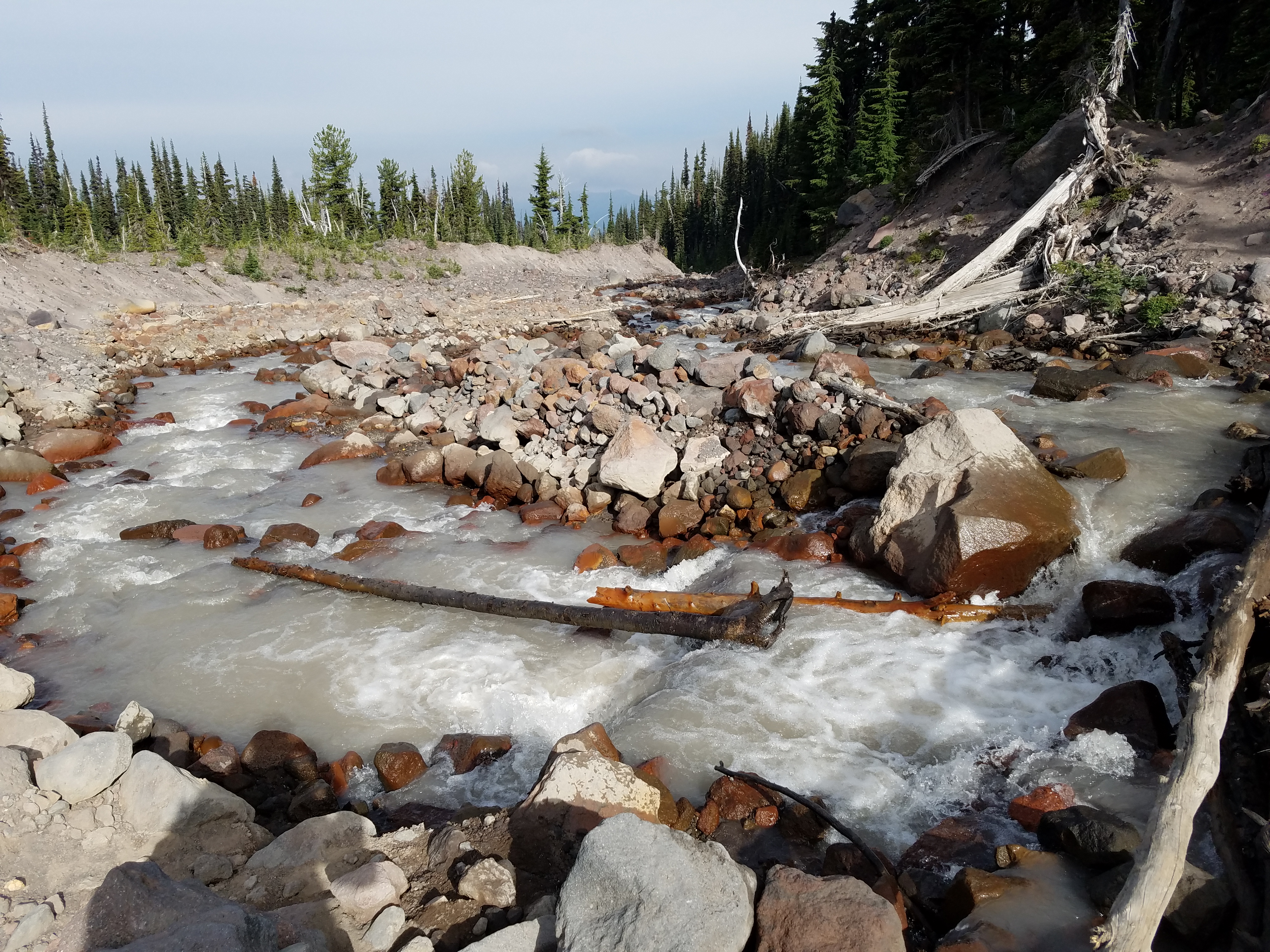 I took a lot of pictures, and I’m not sure it comes out, but looking up at the glaciers, you can see that the ice is blue in some spots. I wonder how old that water is? Ice Age? Later on I started meeting a lot of non PCT hikers, because I realized, it,s a weekend. Three women I met doing a ten-day section told me that they were denied trail magic by some guy because they weren’t thru-hikers. So to make a point, maybe not THE point, when I got to the parking area and the hiker feed was underway, I denied the magic guy. Refusing all his offers of food and drink and chitchat, I strolled through and got right back on the trail.

What a dingus. I’m short on snacks, not sure how this happened. Maybe I had planned to supplement in Trout Lake and forgot? Or maybe I’m just more hungry? There was a clinic there where I weighed myself, still down 28 pounds. They happened to have a nutritionist. I talked to her about protein and fat and ketosis for a bit, maybe that made me feel like I was eating too much? 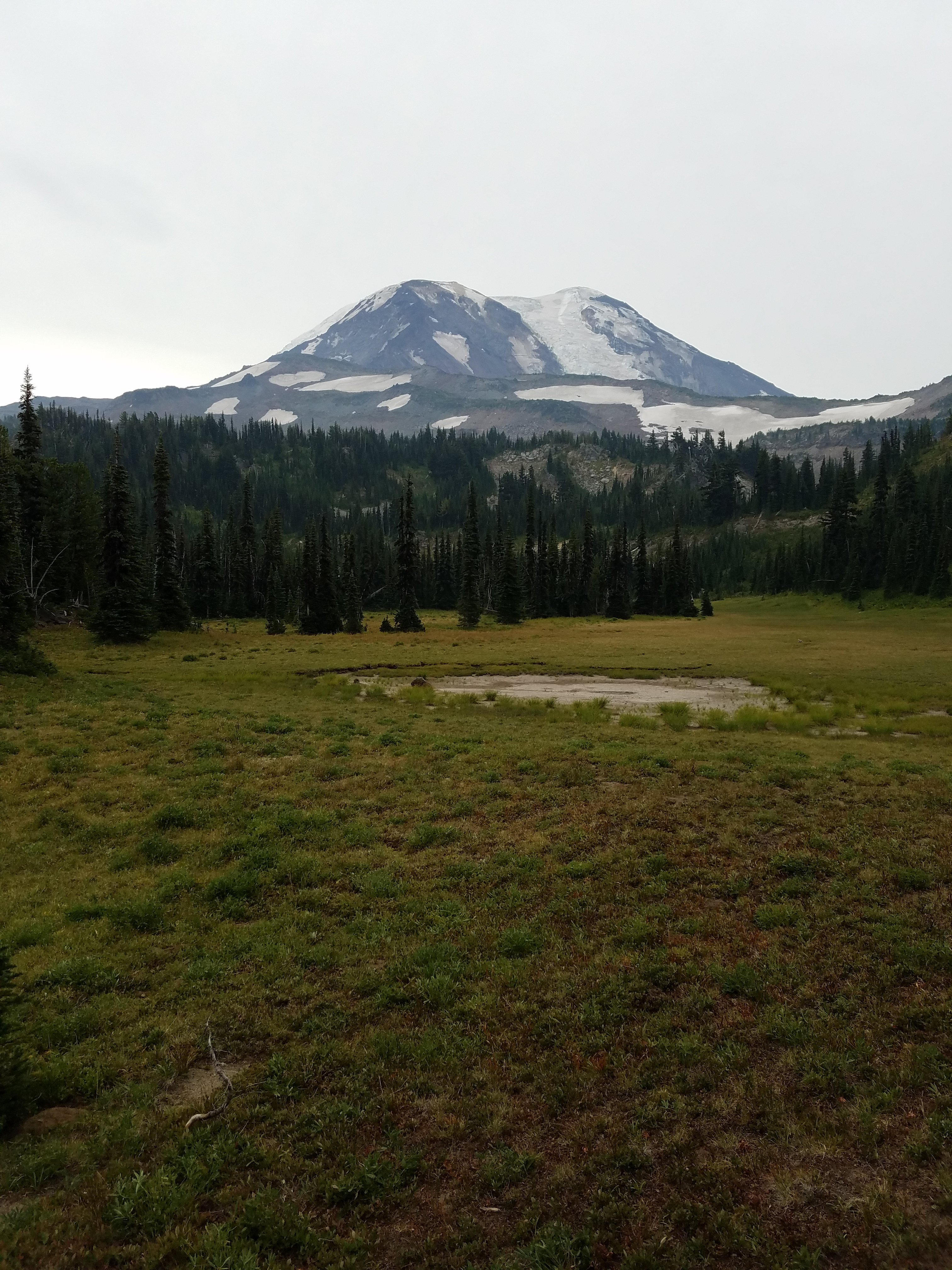 Raced rain all afternoon as the clouds got lower and lower, and mostly won. I got a little sprinkle after 5, and when I found a tent site I grabbed it. I still got the 23 miles in, and managed to get everything sorted well before dark. It was awesome. Feeling pretty good, feet are a little better, but I’m still just plain slow.

Rain delay! Today is a short day. I did a big climb up Cispus Pass, completely socked in with fog and rain. Lacking rain pants, the water soaked into my hiking pants, then down my socks and into my shoes. By 7 a.m. I was squishing along in water. 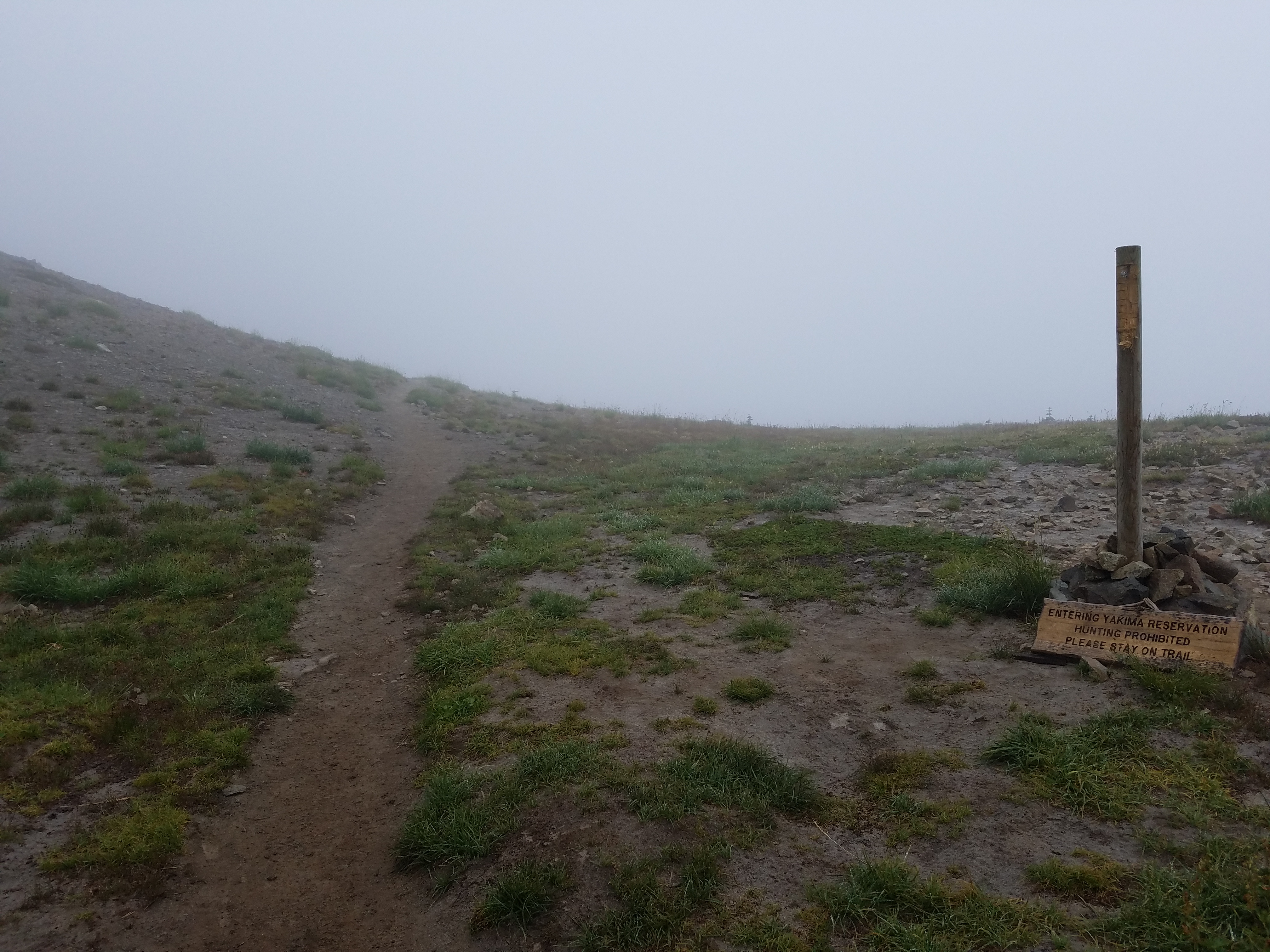 The view we’re supposed to get of the actual Goat Rocks was nothing, and there’s about eight more miles of above-treeline ridgewalking to go. All in the fog and rain, at about 45 degrees. Since I have no warm clothes yet, that’s also kind of a problem. 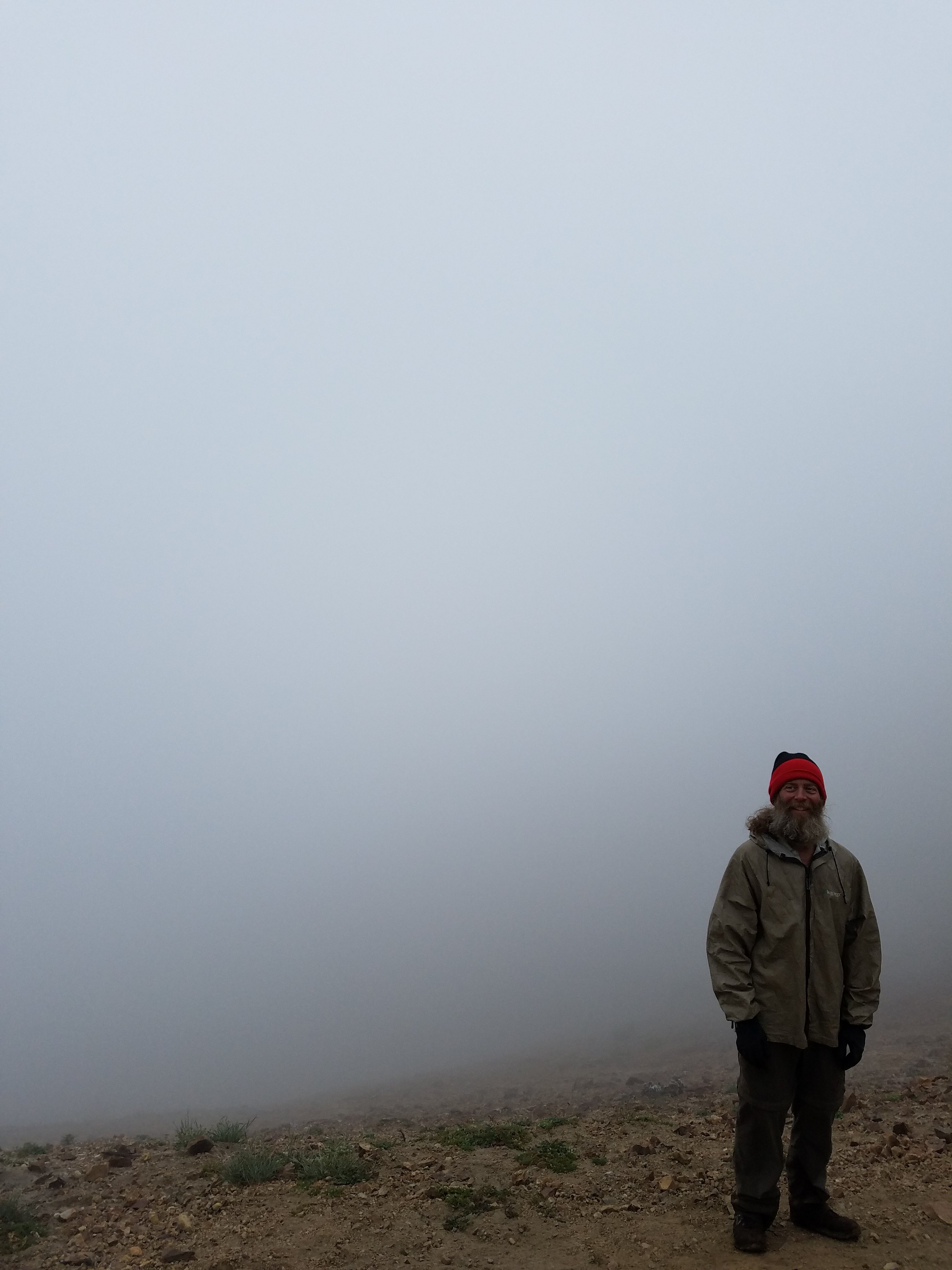 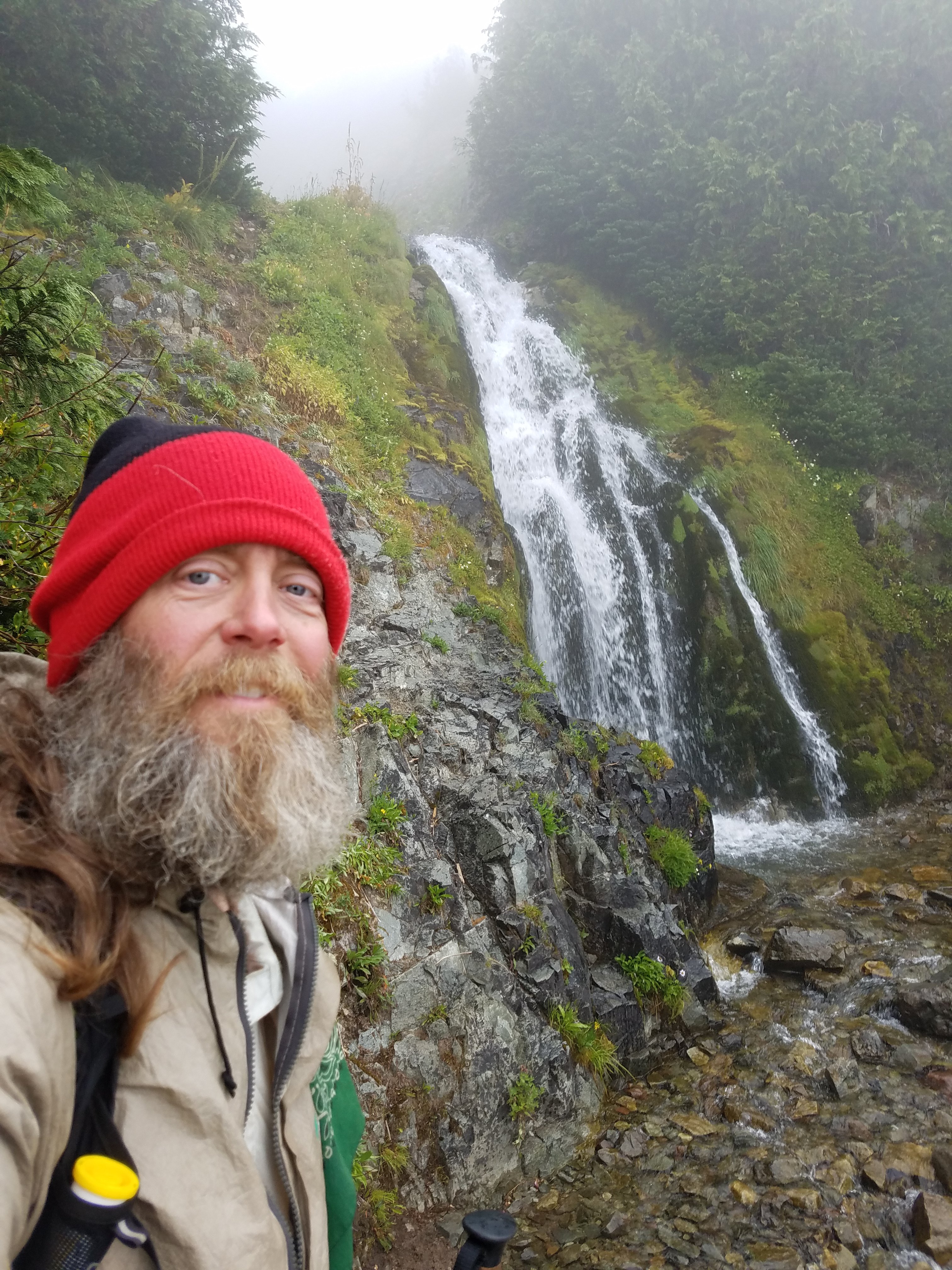 But the big thing for me is that this area is supposed to be a highlight, if not THE highlight of Washington. And as I sit here in my tent at at 3 p.m., at the bottom of the ridge, hearing all the other hikers trudging by, I’m glad I’m waiting. Of course, tomorrow the weather could also suck… but at least I had a chance to see the cool views. Not that I’m judging; if I was short food I’d be hiking. But these folks are going to see nothing; no mountain goats, no glaciers, no views. Since you’re not going all the way in today anyway, why not make today the short one, and tomorrow the long? I reckon tomorrow will be about 22 miles – totally doable. 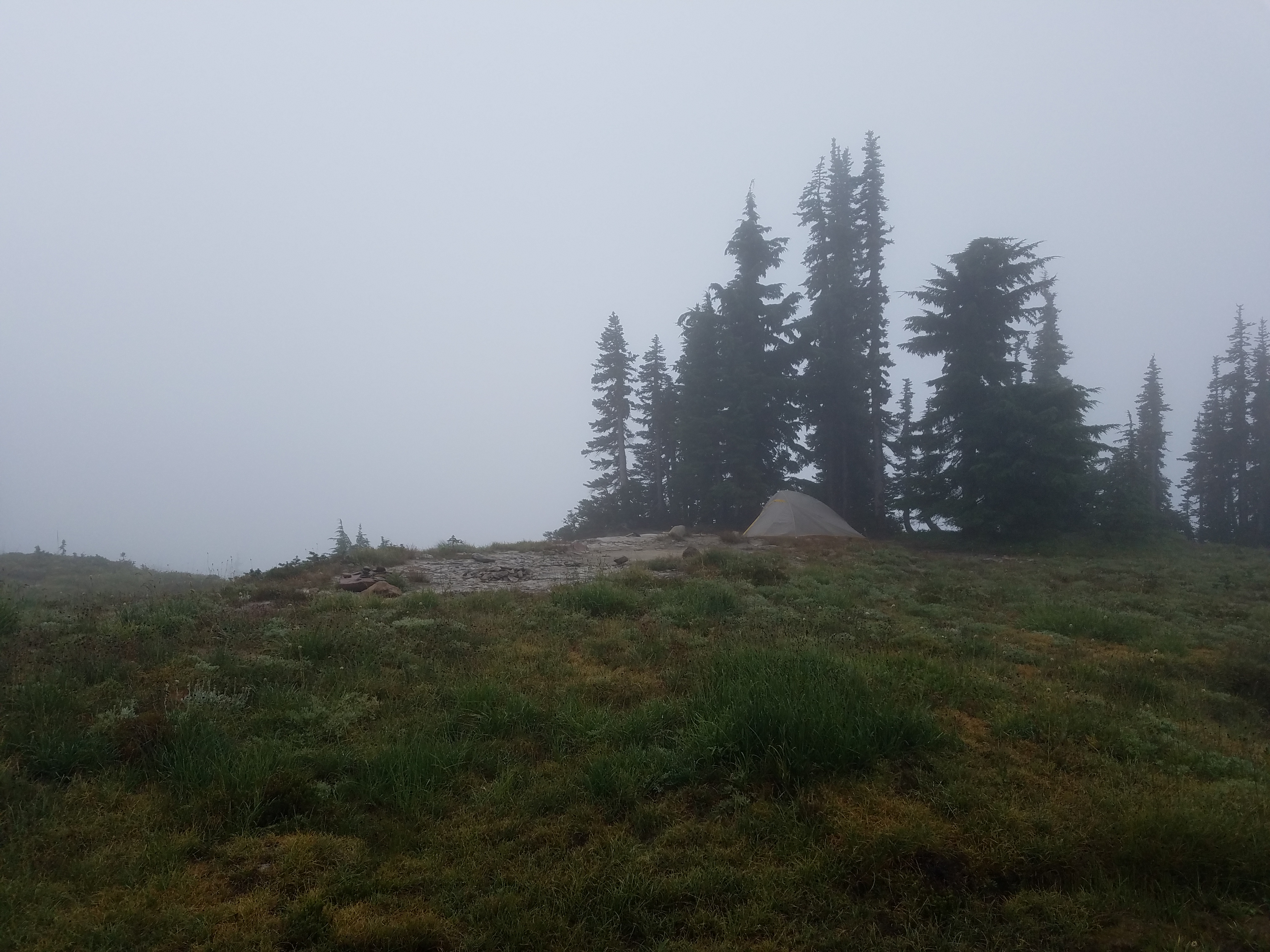 Short on food, which is annoying, especially since tomorrow is now going to be the long day. I’m staring at the snack bars and tortillas marked for tomorrow, and they’re saying, “Eat me.”

Faceplant caught me, at long last, after her extended stay in Cascade Locks. It seems I can’t outwalk anyone. But she is going to stay here, doing the Knife Edge and fire detour with me. A bit like old times. Her satellite text gizmo has a weather report for tomorrow; by midday it’s only partly cloudy. We’ll get a late start, since its dark until 6 or so anyway, then press up the ridge. Maybe we’ll get some of the epic view after all. It will be an interesting and cold night. At 5 p.m. it’s already down to 48 degrees – inside a tent.

“Smokebeard, you nailed it!” said Faceplant as we got up to the top of the ridge around 9 a.m. We got a super late start, 8 a.m., but by then the sky was 90 percent clear blue. Goat Rocks, Old Snowy, the Knife Edge, all pretty sweet. It’s like I used to tell people on the AT, if you get to Franconia Ridge and the weather’s bad, take a zero, or two – but do it when there’s a view.

The Knife Edge threads the needle between two glaciers, one on each side of the ridge. There’s really only about a half mile of sketch, a lot of loose stone, and steep dropoffs. 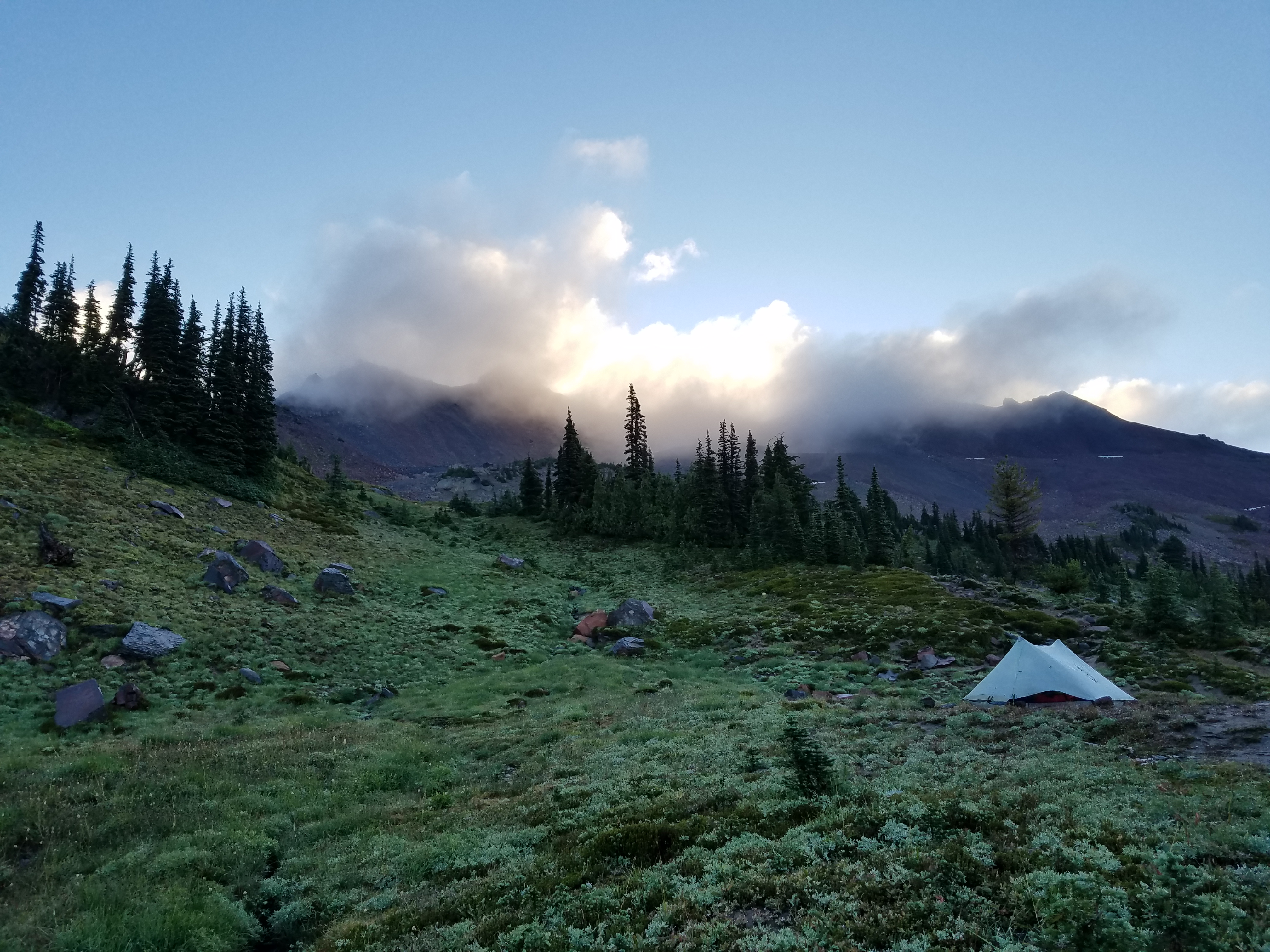 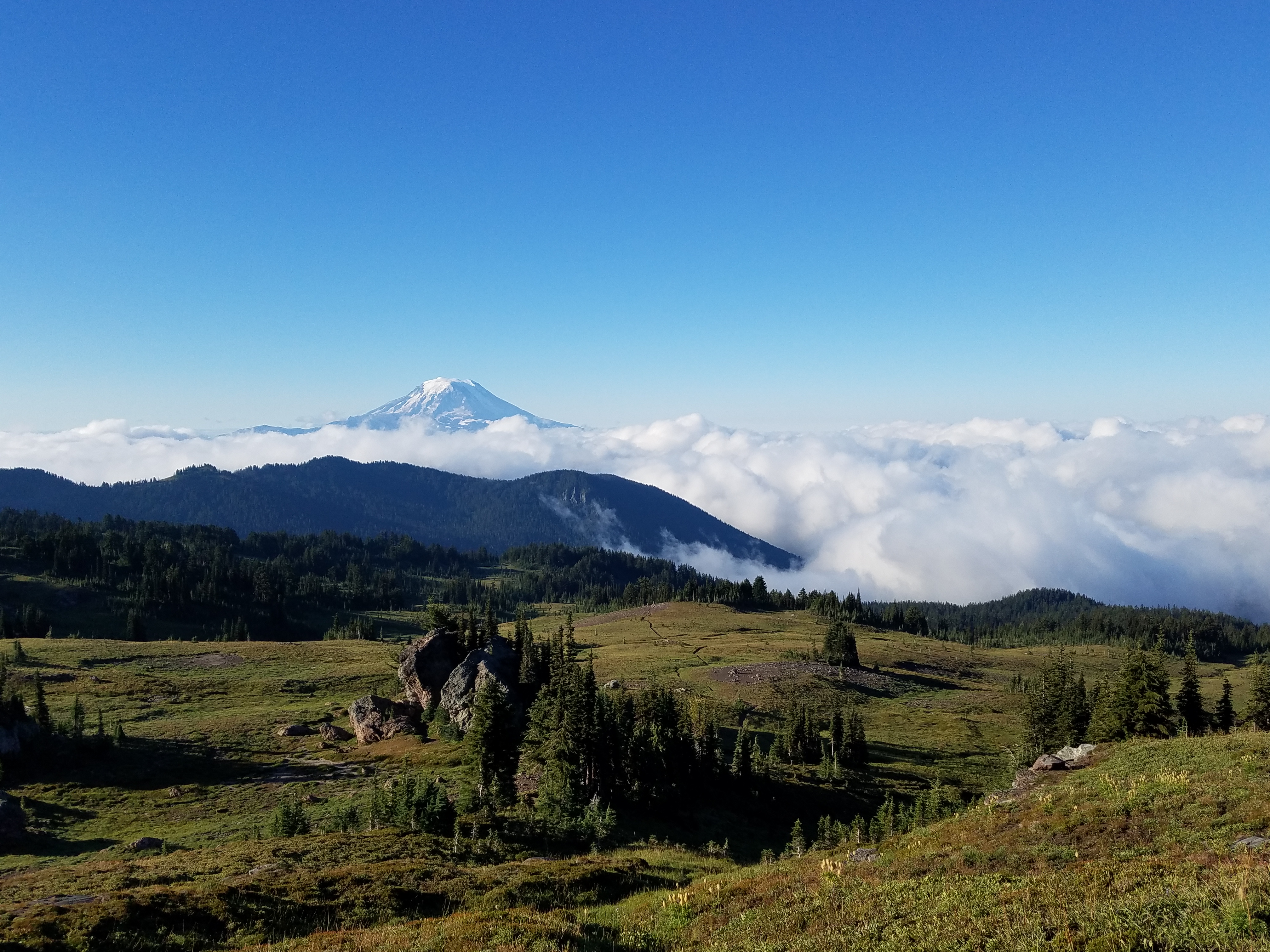 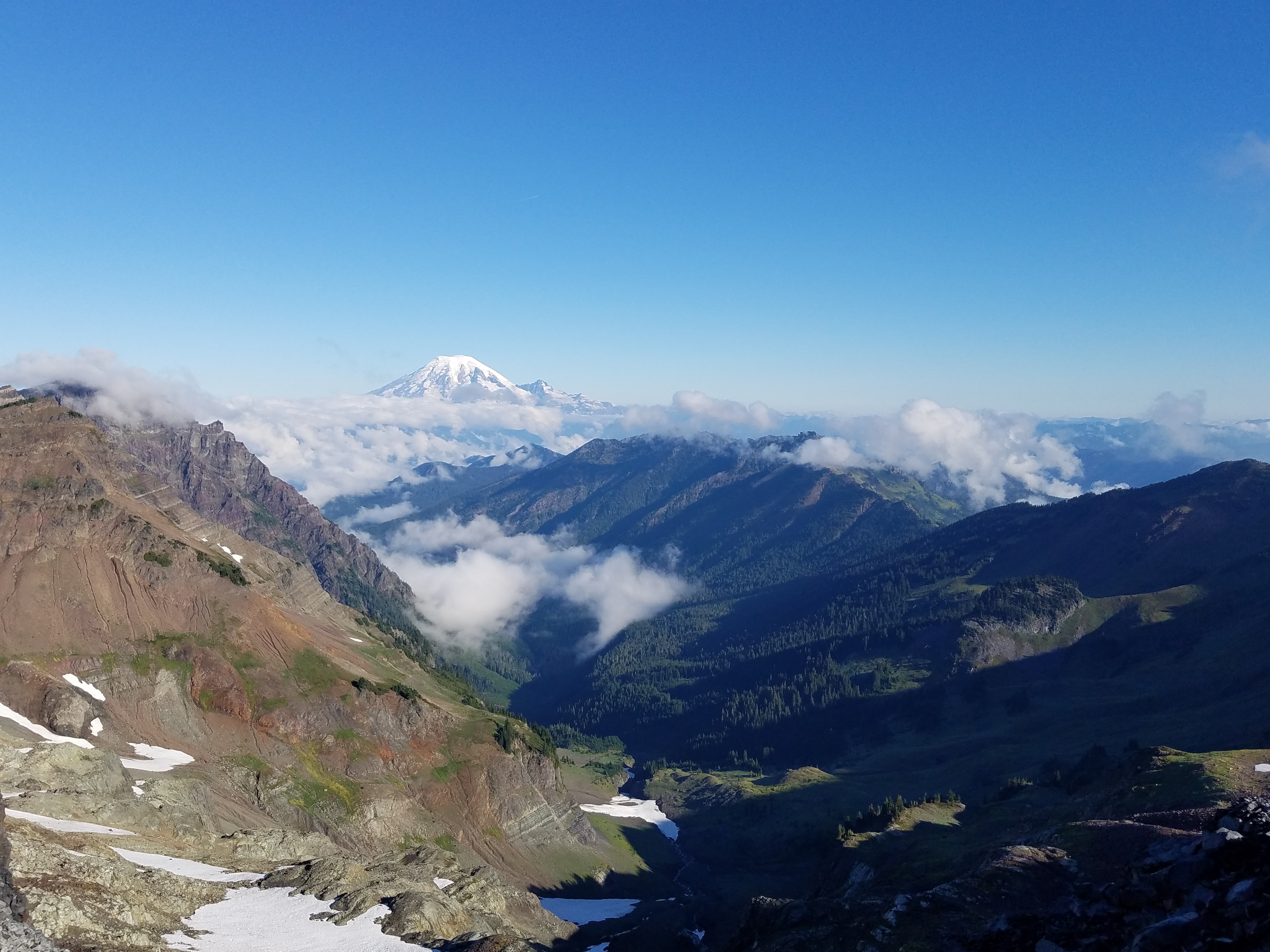 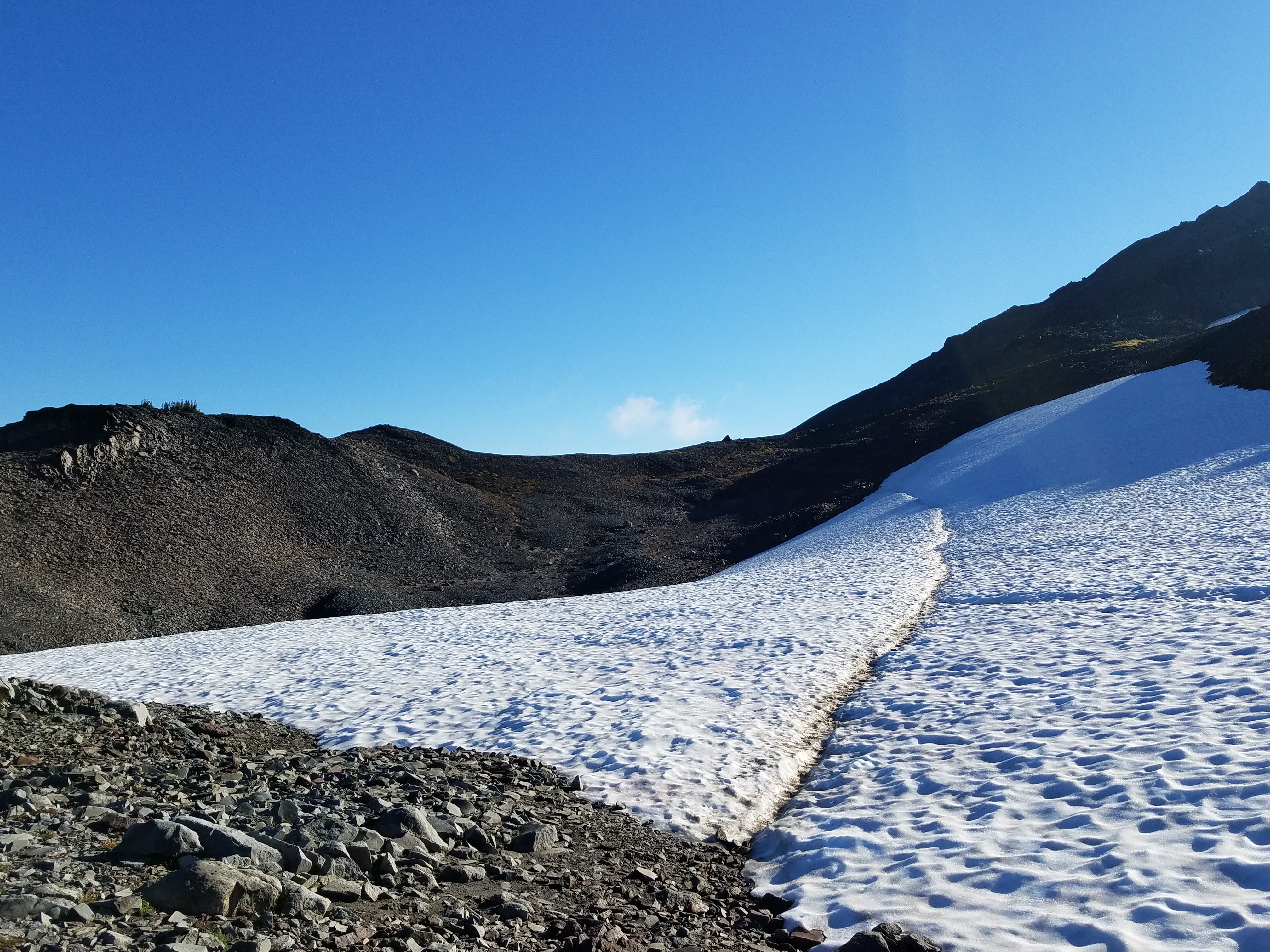 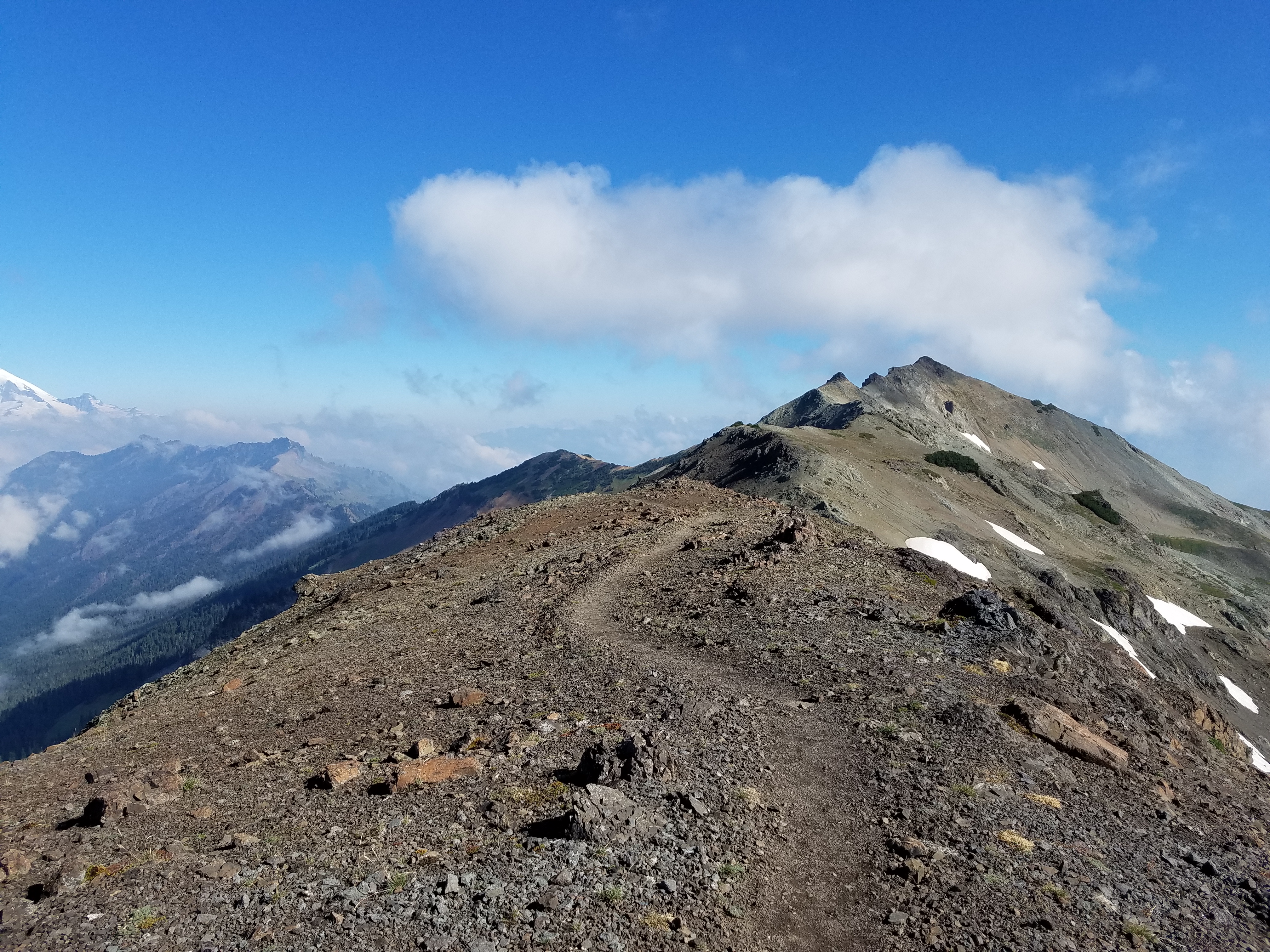 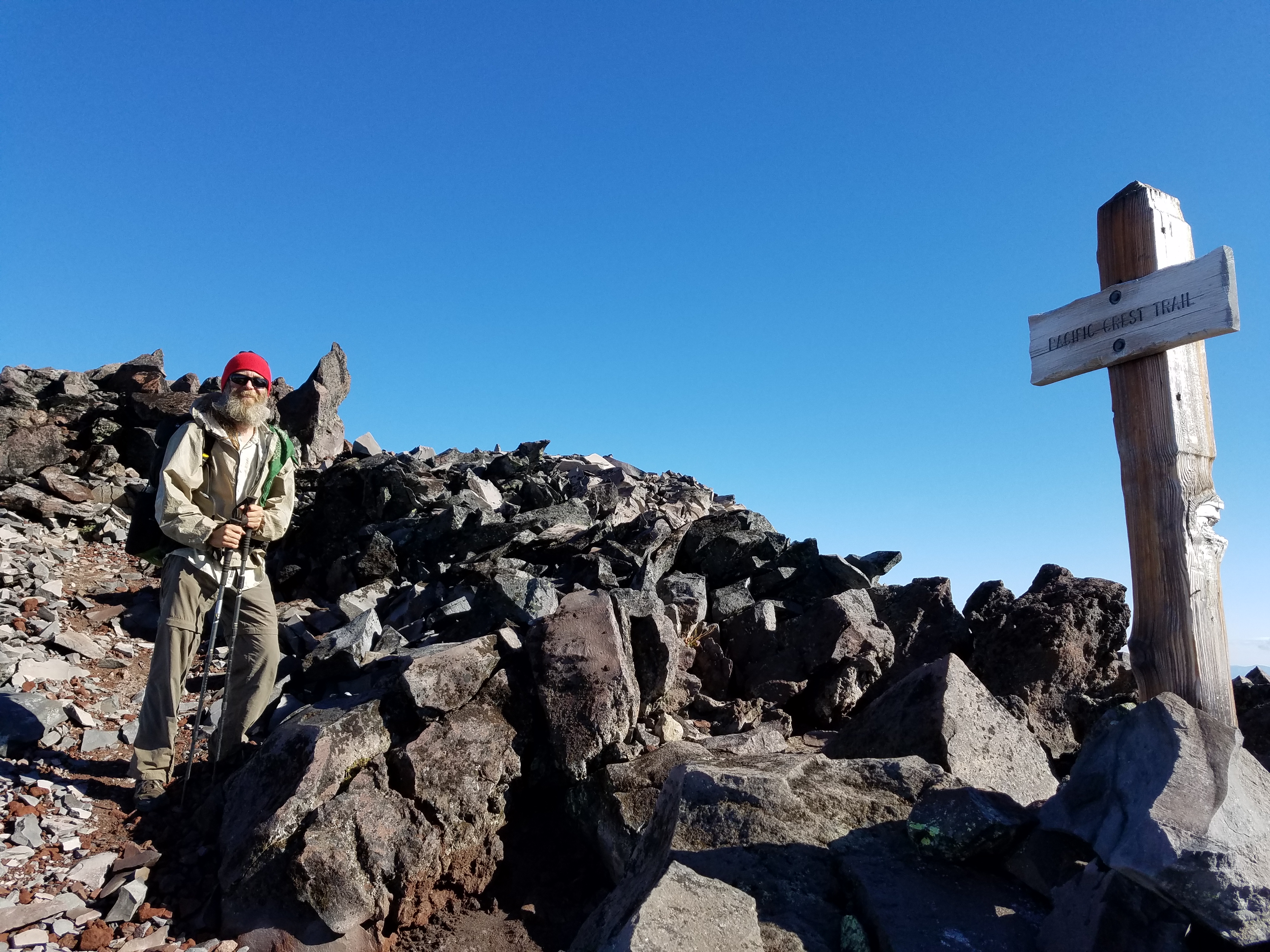 Three miles in three hours. Lots of breaks to look around and take pictures. Then we began the long, sometimes muddy, often crappy, steep set of trails that routed us around the fires.We got to the road at about 7, and despaired of hitching, so we walked. Lucky for us a trail angel left some witness tape. Luckier still was that after about ten minutes, someone stopped and drove us up the pass. And finally, unluckily most of all, the store was closed. 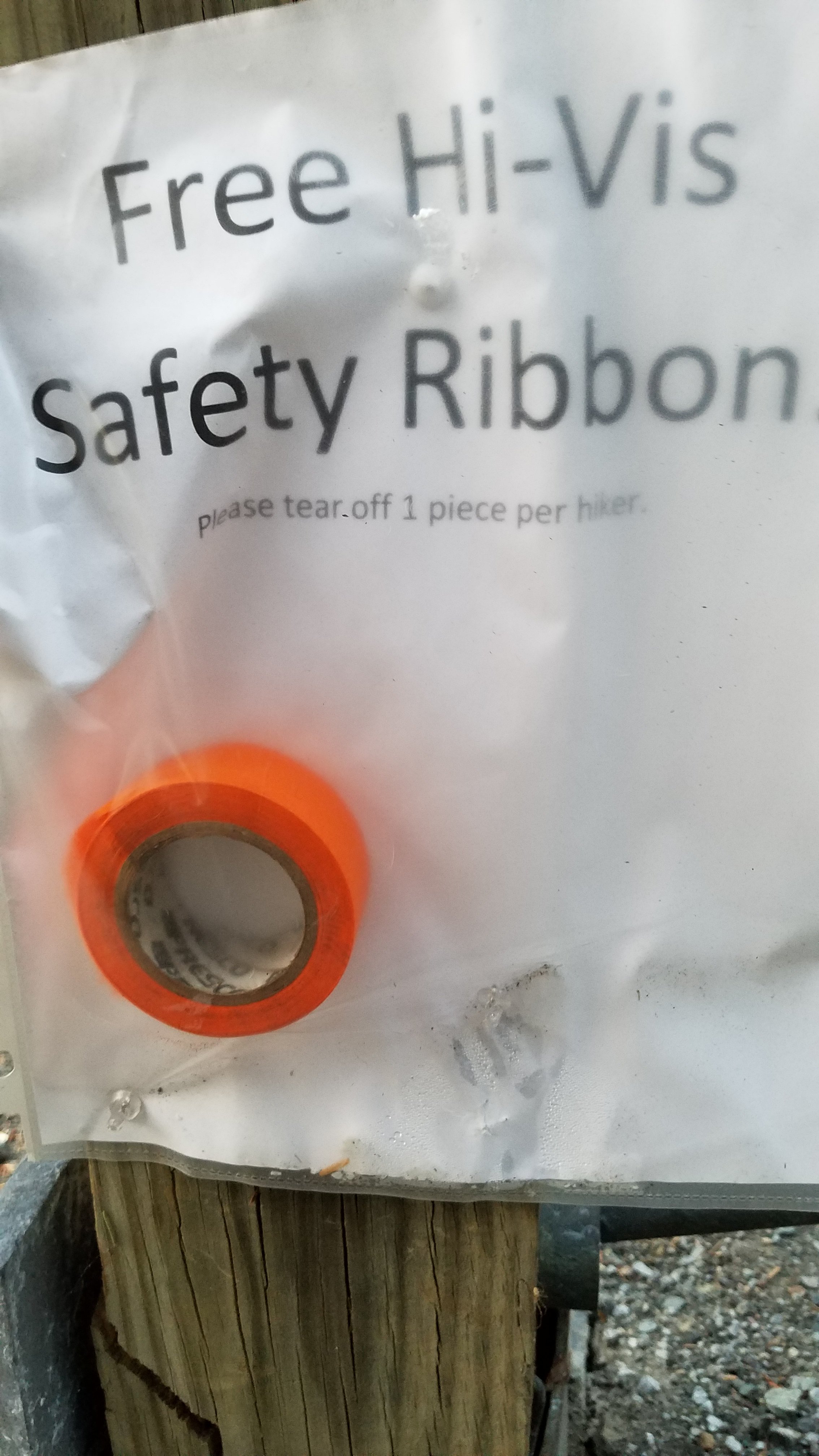 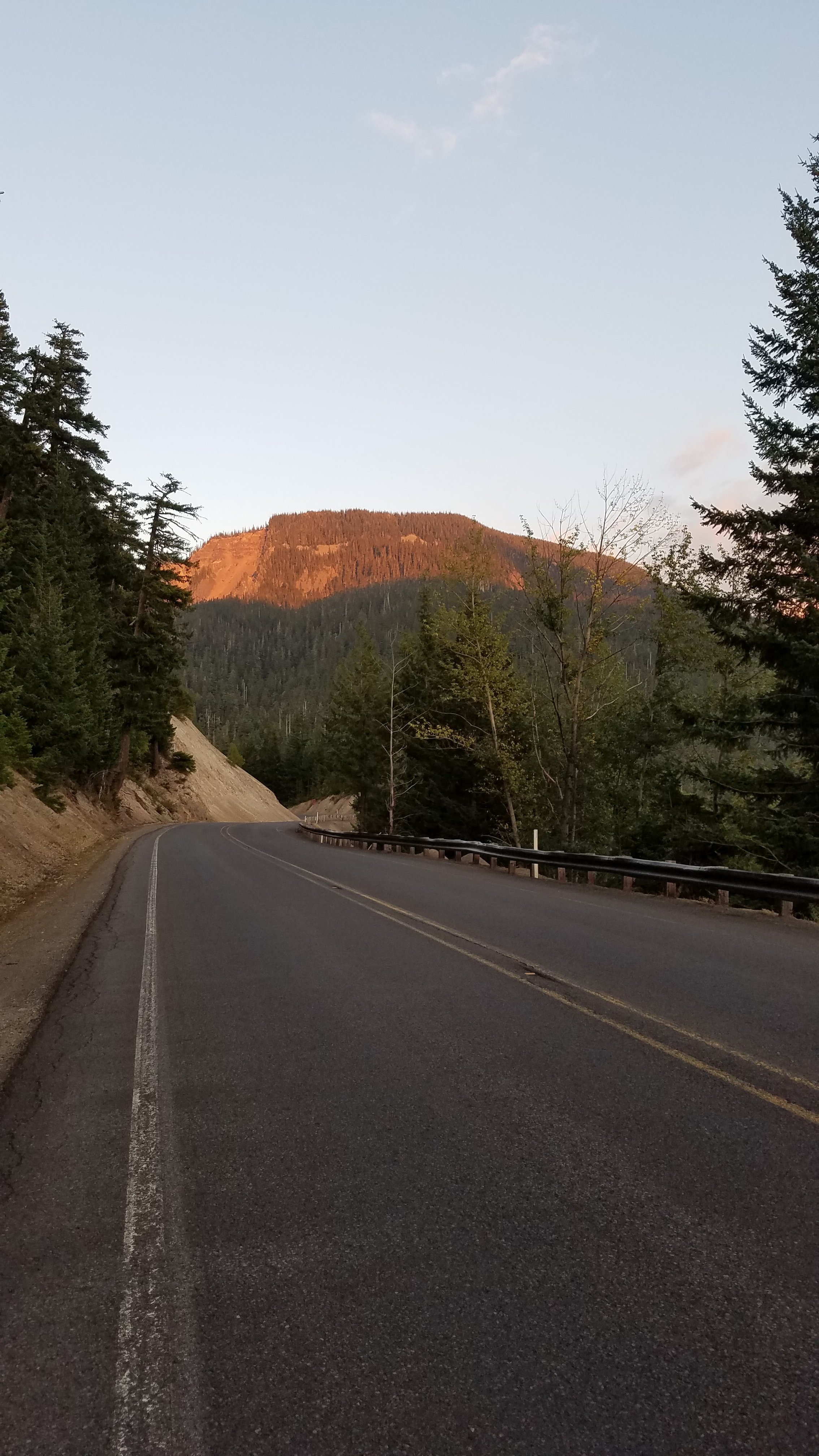 Starving, I ate literally the last food in my bag; a handful of granola, and a ramen bomb. A ramen bomb is when you take a package of ramen noodles, in this case my emergency ramen, and add it to anything else you’re making. Tonight it ended up being a parmesan couscous-soy sauce ramen blend, with extra nutritional yeast added. Mmmm… calories. 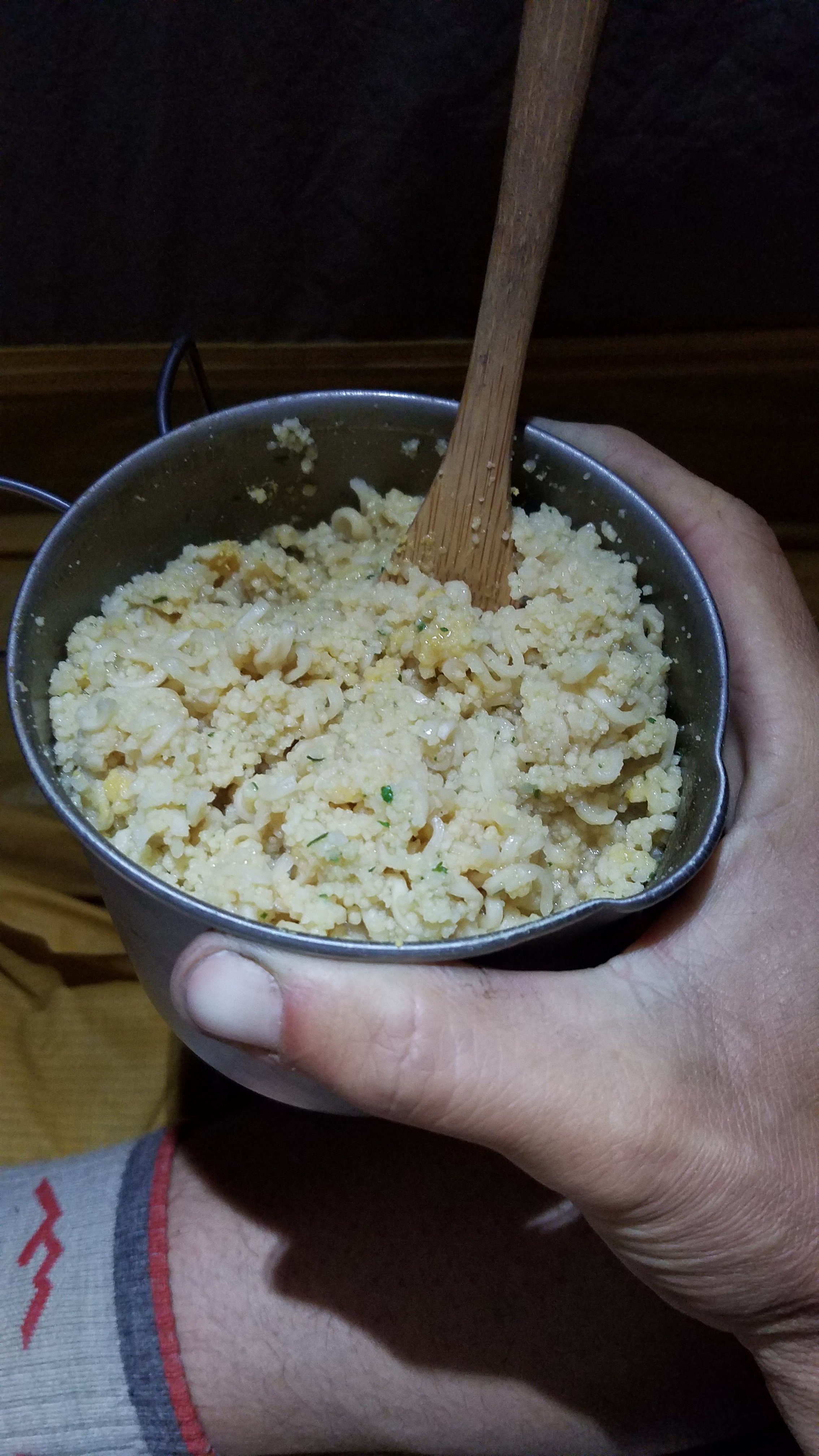 Here’s our laundry on presoak, with no soap. I’m sure I could have done this several more times before the water cleared. Now it will be mostly clean, but also smell of soap!

We camped in the tent city behind the store, and waited until 7 a.m. for it to open. Muffins and coffee and chocolate milk later, I’m doing laundry and getting stuff sorted for the next 100-mile stretch to a place called Snoqualmie.

Ed has hiked the 2160+ mile Appalachian Trail, across Scotland on the 73+ mile Great Glen Cycle Route, all 46 of the Adirondack High Peaks, the 78+ mile Rhode Island North/South Trail, and the Saranac Six. He is also a certified Leave No Trace Trainer. A former MATC Caretaker in the Piazza Rock/Saddleback area, hes passionate about applying Leave No Trace as an ethical system. His latest journey was a thruhike of the 2652+ mile long Pacific Crest Trail. Reports on his other travels, mostly in New England, are at https://smokebeard.wordpress.com