Hiking with Cancer: The Story of a Couple Pursuing their Dream

Lynn Shapiro, a.k.a Three-Guy, scans the trail in front of him looking at the trees lining the path. Nothing goes unnoticed when Lynn is out in nature. A small gully covered in moss, unique trees standing tall amongst burn areas, tiny flowers peppering the side of the trail it all leaves a powerful impression on Lynn when he escapes from his world. Nature finds him solace.

Standing a foot shorter than him and walking just in front is his wife, Patti McCarthy or Glow in the Dark. Likely humming a song to herself or chatting with whoever is near, she radiates happiness when out on the trail. Its not uncommon to find her engaged in conversations with other hikers, exuberant about the opportunity to discuss a shared passion for the outdoors. Its always been this way, ever since she and Lynn began traveling after their honeymoon. Being outdoors, surrounded by natural landscapes and far away from the concerns of the real world, brings Patti complete tranquility. 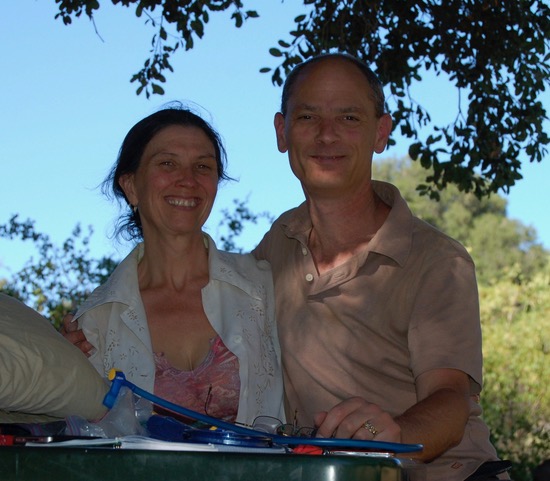 Three-Guy and Glow-in-the-Dark on trail together

The two walk slowly up hill, taking measures to not push themselves past their limits. As weekend warriors, they arent able to get out on the Pacific Crest Trail too often, leaving them with the perpetual problem of having to regain their trail legs with every adventure. This never seems to bother them much; they move at their own pace, they enjoy their surroundings to the fullest, and they hike their own hike as theyve been doing for the past five years as they section hike the PCT.

It was back in 2002 that the idea to hike the PCT first struck the couple. They were on their first backpacking trip, a two day trip through the Grand Canyon, when they met someone who talked about the trail. Having already quickly fallen in love with backpacking, Patti was immediately keen to the idea of trying to complete the PCT. Lynn was a bit of a skeptic and took a little more convincing, a decade’s worth to be exact, but by 2012 he had also come to believe strongly in the idea of backpacking the PCT.

And so, during that summer, they set out to hike the trail, bit by bit. Living in San Diego County, the southernmost section of the trail was easily accessible. They wanted to begin small, doing day hikes on the weekends and slowly building up their confidence to do overnight trips. Every weekend that they could, they would be out on the trail hiking. Sometimes it was a learning process, figuring out navigation or knowing how much water to carry and what hours they shouldnt hike in the desert. But with each outing, they learned more and slowly began to feel more confident in their abilities as hikers. 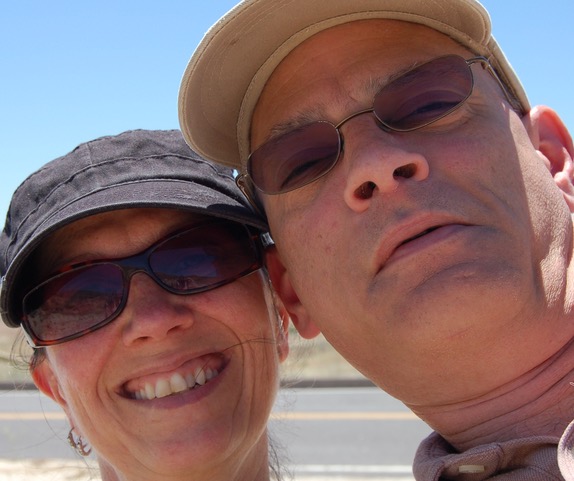 Patti and Lynn’s first photo on the PCT, taken right before they left from Eagle Rock to hike North, to Warner Springs

After their first summer of hiking, Lynn and Patti had backpacked 122.5 miles along the Southern section of the trail and had plans to continue hiking the rest of the year. They felt energized by their experience on the trail and excited to continue pushing forward, growing stronger as backpackers. And then, October came.

On October 4th, 2012, Patti was diagnosed with breast cancer. For a year, she would need chemotherapy, radiation, hormone therapy, herceptin IV therapy, and some additional surgeries. The diagnosis was a complete shock to the couple, who both felt like they were healthier than they had been in years. Life would soon become a chaotic mess of medical appointments and constant exhaustion, depression and emotional distress. To add insult to injury, this also likely meant a temporary detour in their efforts along the PCT.

Both Patti and Lynn believed their hiking days to be over, at least for the next year. They even took one last hike before Patti began chemotherapy, thinking it might be a while before they could get back on trail. At the end of the hike, Patti knelt down on the trail and kissed the dirt beneath her feet as she said goodbye for now to the PCT. 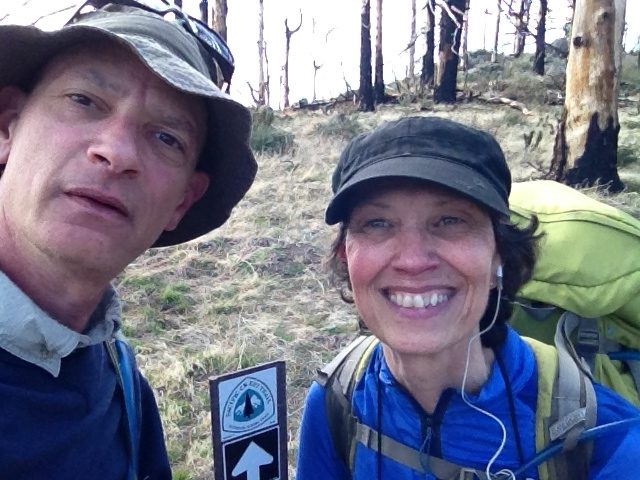 Sometime after recovery, Lynn and Patti on trail during a section hike.

Back in the real world, things moved quickly. Patti began chemotherapy in November and jumped head first into the world of being a cancer patient. Many people offered words of wisdom and encouragement, the best of which was to find a focus. If you dont have anywhere to put your energy, youll allow cancer to take the wheel, and Patti was committed to not letting that happen. After much thought and consideration, she decided, why couldnt hiking be that focus?

Lynn was hesitant to consider backpacking with Patti while she underwent chemotherapy, but her Irish stubbornness convinced him this was the right move. Just two weeks after her first chemotherapy round, they were out on trail hiking.

Backpacking between chemotherapy and radiation treatments wasnt always easy. Often, Patti would find herself lacking the energy she needed to push up hills or go the extra miles. On one occasion, when faced with extreme winds just south of Tehachapi, Patti was literally blown over on the trail. The sun was setting fast and they were nowhere near an established campsite, let alone a flat spot to lay a tent. Exhausted and disheartened, Patti and Lynn found a small bivy-sized spot and crawled in their tent, not set up, with the rain fly over them to protect against sand pelting them in the night. The next morning, rather than continuing the 26 miles they had in front of them, they turned around and hiked back the four miles they had done the day before to the car. In that moment, Patti felt defeated, as if cancer had won.

Despite these setbacks, the couple continued hiking throughout the year of Pattis treatments. By the fall of 2013, they had hiked an additional 186 miles, meaning they had 308 miles of the PCT completed. In November, just over a month after finishing her last round of chemotherapy, Patti and Lynn set out for a celebratory five day, sixty-mile trip from Gobblers Knob to Deep Creek Bridge. 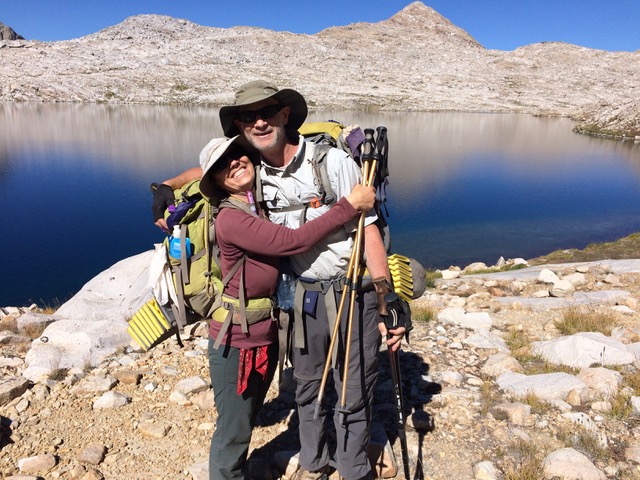 A happy Patti and Lynn enjoying their time out on trail.

The hike was filled with beauty as it wove through desert mountains and vast landscapes, ending with the reward of the Deep Creek natural hot springs just north of Big Bear. Patti reflected on her year of hiking in their blog, saying what keeps me going? I dont know. There were times on the trail, especially in the desert, when I was dizzy and exhausted, Id think, why the hell am I here? Why do I insist on doing this? Irish stubbornness? The nature I love? Because I can? Because I refuse, or try, to let this stupid disease defeat me?

While the reasons for pushing on were not always evident, the effects of having done so couldnt be more apparent. Focusing on the trail allowed the couple to pull themselves away from cancer, even if only for a moment, so that they could continue experiencing life. Patti didnt want cancer to live her life, and the trail reaffirmed that it didnt. She was able to continue pursuing what brought her joy, what she was deeply committed to. Having that outlet made all the difference throughout the year of Pattis treatments, as it showed her that she is strong and capable, and that she will not allow her life to be ripped apart by one disease.

The trail also created a deeper connection between the already close couple. With the trials of the trail and cancer running parallel to one another, Patti and Lynn were challenged often throughout the year. Learning to communicate better with one another about their needs and anxieties, both on and off trail, created an even deeper strength between the couple. Theyre looking forward to continuing to test this strength as they embark on their next endeavor; completing the Pacific Crest Trail during the 2018 hiking season.

With approximately 1,100 miles under their belts, Patti and Lynn are hoping to set out from Tuolumne Meadows next July to complete the remainder of the trail. They have a short section in Northern California that they completed this summer and will flip flop around, before continuing north with their sights on Monument 78. While the longest amount of time theyve spent on trail is about two weeks, they feel prepared and confident in their abilities to tackle this next trip and finally complete a fifteen-year-long dream in the making.

To follow their adventures, check out their blog mcshappctjournal.wordpress.com, or on Instagram @mcshap. There you can find links to their book, Hiking Cancer, and more information about their experience section hiking the Pacific Crest Trail.