The PCT Desert: Myths vs. Fact

Most Pacific Crest Trail thru-hikers begin their journey in the desert  the first steps on the trail that theyll be walking on for the next five months. The desert is one of the most frequent places hikers leave the PCT, and if you’re worried about what to expect in this great sandy expanse, here’s my list of myths vs. facts regarding the first 700 miles of the PCT. Hopefully this gives you a better idea of what youre getting yourself into. 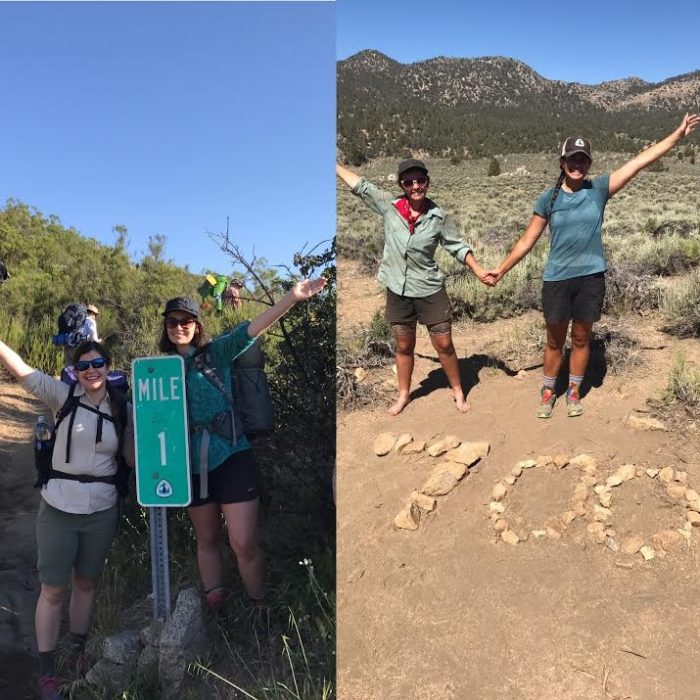 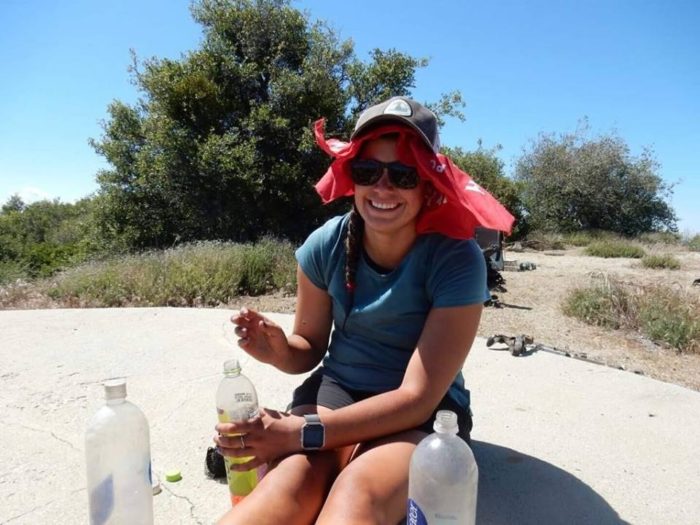 Compared to other sections of the trail, the water is undoubtedly the worst tasting in the desert. Youll often find yourself getting water from sketchy sources. By sketchy I mean sources that smell terrible, are ill-colored, or just seem plain dirty. But your thirst for water is at an all-time high in the desert, so its likely youll fill up your SmartWater bottles at any source you come to.

Tip: I learned early on to use Mio Liquid Water Enhancer. There are a variety of flavors, so youre sure to find one you like. I stuck with flavors that had B Vitamins and electrolytes, but thats up to you. You’ll find other ways to flavor your water as well, some of my other favorites were Crystal Light Pink Lemonade and Peach Tea.

Its likely youll get sick at least once 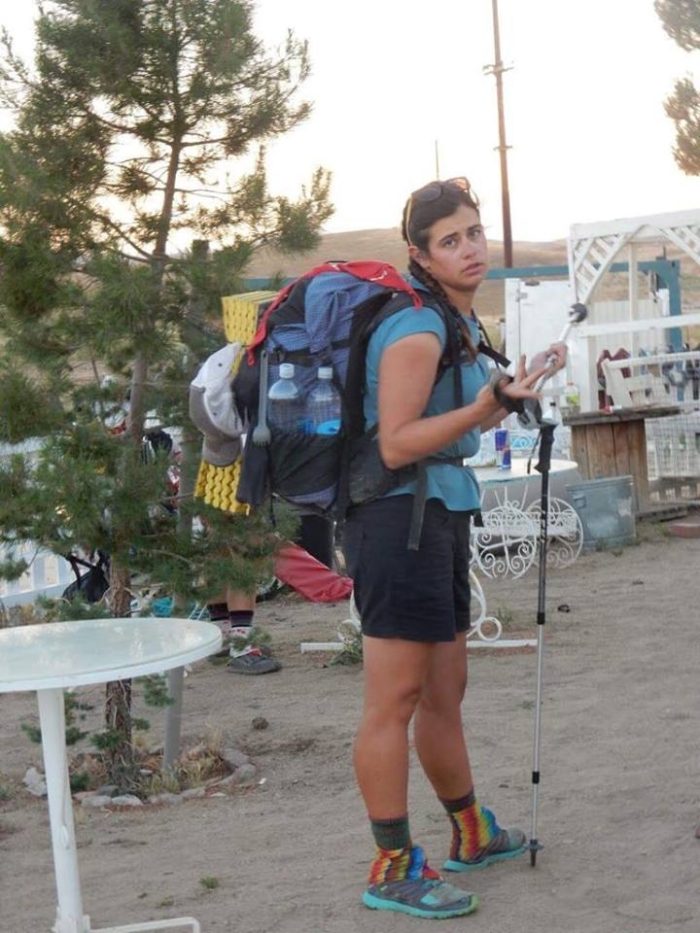 When Norovirus strikes for the second time.

The most common place I saw hikers get sick on trail was in the desert. Norovirus was abound on the PCT in 2017, and I didnt just get it once, but twice. It was miserable, moreso the second time because it took my immune system longer to recover.

There is no surefire way to prevent getting sick on trail, but I always made sure to hike with Emergen-C. It contains 1000 mg of Vitamin-C, has B Vitamins, electrolytes and zinc, all which will help boost your immune system and give you energy without a crash. If you get sick, hopefully youre close to town, so you can sweat it out (literally) in a hotel, with the AC on. To help prevent getting sick, try to avoid sharing drinks and food. This is hard on the trail, because everyone shares everything, but when you do share snacks, ask hikers to pour out their portion instead of dipping their hands in. When meeting a new hiker, try the first-bump instead of a handshake. Its not as awkward as you think.

Your hiking schedule will be different in the desert 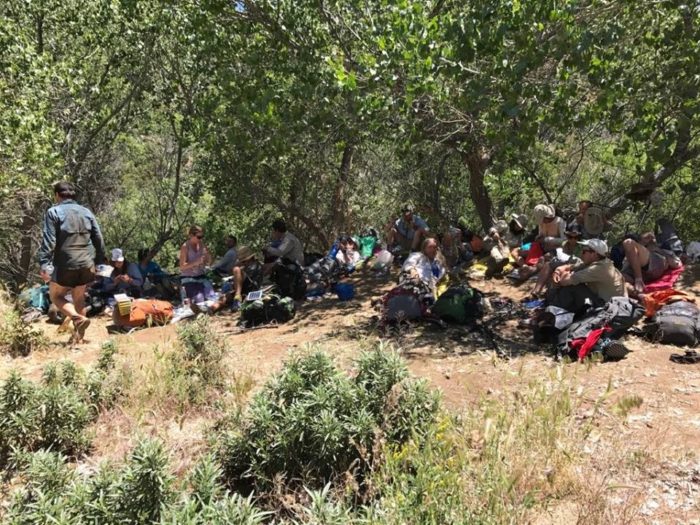 Happy hikers huddled under shade waiting for the heat to fade.

Youll likely wake up early, stop around 11am, and not start hiking again until about 4pm or later due to the brutal desert heat. Find a nice shady spot to sit underneath, rest your feet, and eat all the food. Just realize that the shade youre sitting under moves with the clock, so youre going to have to find a new spot soon. Its a bummer. Youll get used to it.

You won’t have enough water 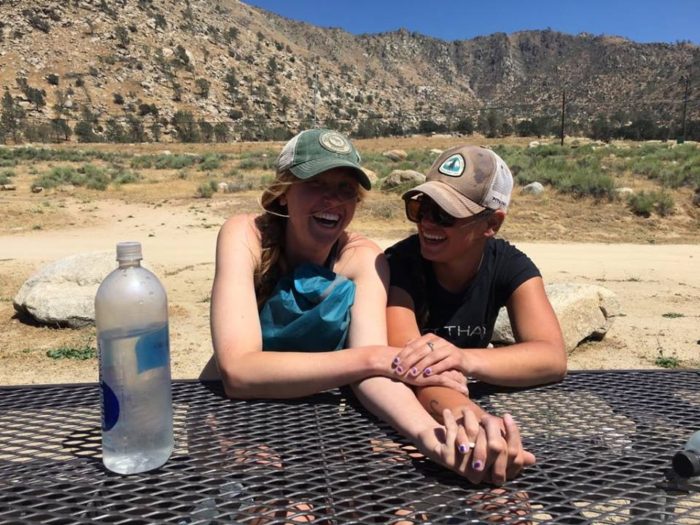 Fact: There is enough water to go around, you just need to plan carefully. I always had at least four SmartWater bottles on hand, and a 1L bladder in case of a heavy water carry. My longest carry was supposed to be 40 miles, but I was pleasantly surprised to find a large water cache at a dirt road 20 miles in. ( A water cache is a surprise spot  where trail angels leave jugs of water for hikers.) When you get to a cache, only take what you need, and leave the rest for the hikers behind you. It’s common courtesy.

It’s normal to stress about water in the desert, but it never became a serious concern during my hike. I planned accordingly and made sure my bottles were filled up when they needed to be, and took advantage of every water source along the way, no matter how far I had to walk to find it. Yes, several water sources can be three miles (or more) off trail. If you have to fill up before camp, and won’t reach another water source until the next day, make sure you plan enough water for your dinner.

You wont see anything green

Fact: I was pleasantly surprised by the lush green plants I was often surrounded by. Some areas consist of sand, rocks and dirt, but oftentimes youll be hiking through Ironwood trees, tall Yucca plants, and beautiful Ocotillo plants. This makes for beautiful scenery and shady spots.

Youll be hiking in solitude 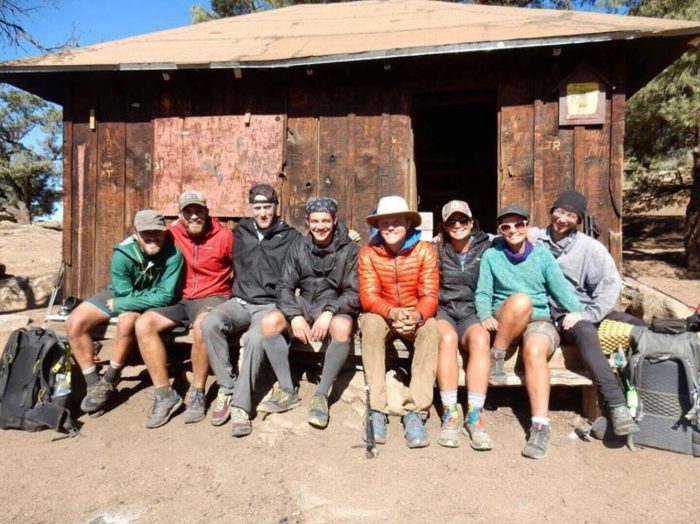 Fact: One of my familys biggest worries was that I would be hiking in solitude.What would happen if I got hurt? Had an emotional breakdown? Got bitten by a snake? One thing I can assure hikers who start from late April to May is that there will be SO many other people around. I only camped alone once this year, in Washington, by choice. You WILL be surrounded by other hikers who are in the same emotional state as you. Talk to them, they want to talk to you, too.

You’ll get bitten by a rattlesnake 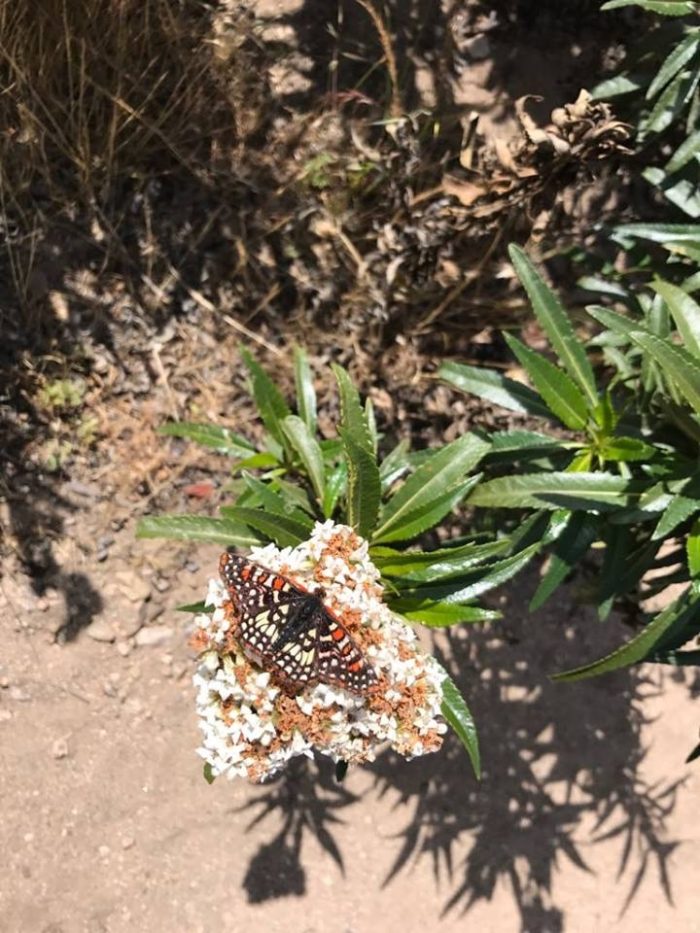 Fact: Although I did see several rattlesnakes on trailyes I was shaken by their presenceI never felt threatened. The snakes I saw were more scared of me than I was of them (they even told me so). Another hiker on trail told me rattlesnakes have a rattle for a reasonthey want to warn you before they strike, and they are likely to save their venom for a rodent that they can eat, instead of wasting it on a human.

No one actually packs out their toilet paper 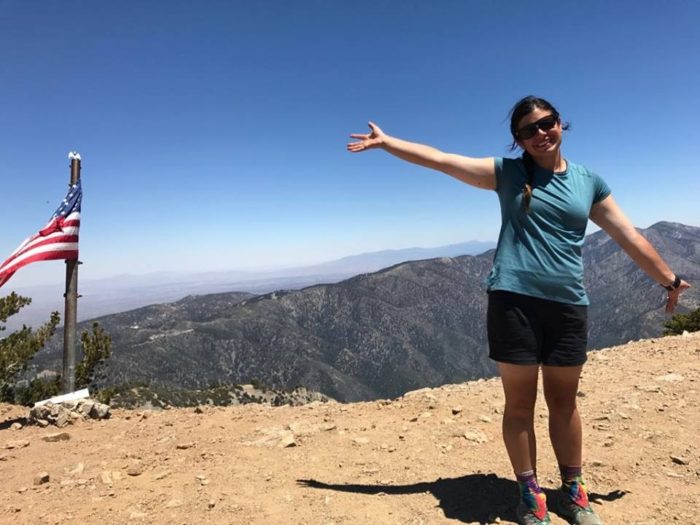 Fact: Everyone I knew on trail packed out their toilet paper. I am ashamed to say that before hiking the PCT, I didnt. Get used to it. Have a darker colored Ziplock for this purpose, so you dont have to see the yucky toilet paper every day when you take out the bag. The Ziplock doesnt make your pack smell, and you only make contact with it when you are doing your business, or throwing it away in town. Also, the desert ground is particularly hard, so burying toilet paper doesnt work anyway.

-If youre staying at Scout and Frodos, take advantage of doing a shakedown before you leave. Cutting weight in your pack helps make the hike more enjoyable.

-The sunsets in the desert are stellar. Get excited, you get a front row seat. 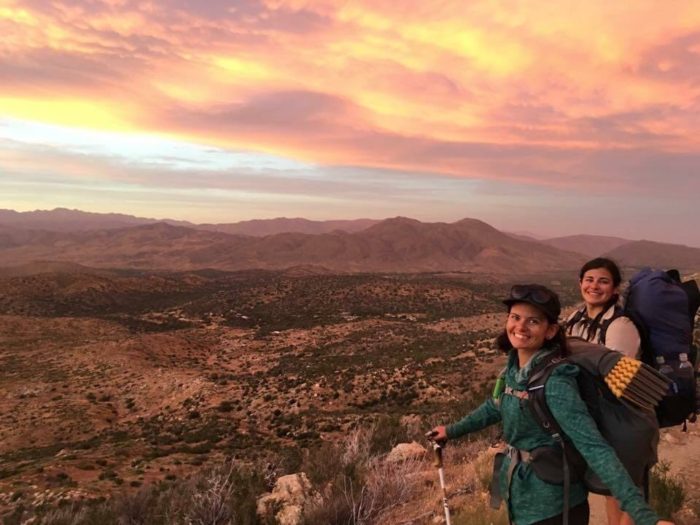 -Its common to replace a core gear item in the first 700 miles of the trail. For me, it was my sleeping bag and sleeping pad. Budget for this adjustment, you never know what you really need until you are out there.

-Learn how to use your cookset before you leave. I had no experience using my JetBoil before I hit the trail, and the bottom of my stove is forever charred because of it.

-Take the time to dip your feet in water when you cross a stream. Many water sources in the desert arent large enough to do this, so when you find one that is, its quite an enjoyable experience.

-Blisters popped up the most for me in the desert, while my feet were still building calluses. I learned to pop them, thentape them using Leukotape. Its 100000x better than duct tape.

-Gaiters help keep sand/rocks out of your shoes, but they arent necessary. Im loyal to Dirty Girl Gaiters, but you do you.

-Dont stress over getting a trail name. Everyone wants one, you arent alone. Youll get yours soon enough, and remember if you dont like the first one given to you, you dont have to take it.

-Take pictures of your new friends, and theyll return the favor. We all want to document this epic journey. 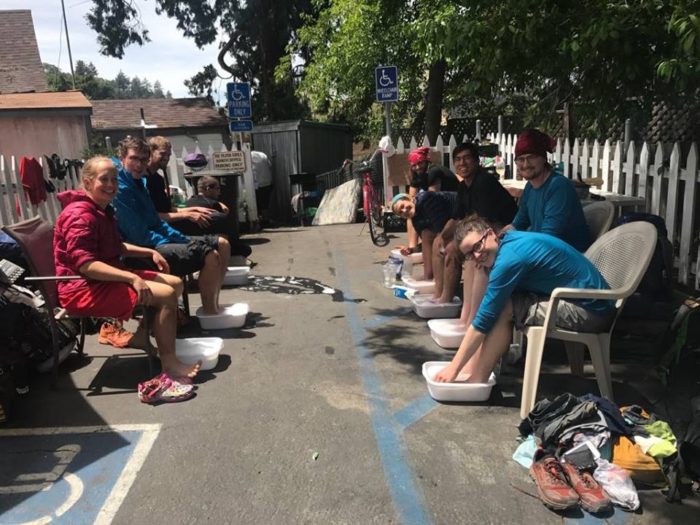 Hikers have a foot bath at Carmen’s Place, a trail angel in Julian, Calif.

-Try packing out produce. Idyllwild, Big Bear, Wrightwood, Agua Dulce, Tehachapi, and Lake Isabella have ample resupply locations to find produce, and I was so thankful for it. Produce can be heavy, but I think its worth it. Also try vegan sausages. They last FOREVER and are delicious.

-Give cowboy camping a go, youll thank me later.