The Pacific Crest Trail weaves through environments ranging from desert floor to 10,000-foot mountain passes, and everything in between. On the surface, this seems that finding places to camp in a hammock on the PCT would be hard, if not impossible.  However, after a little research, it is possible to thru-hike the entire PCT with a hammock shelter.  I just completed a PCT thru-hike while carrying a hammock for the entire duration. Before my PCT hike, I thru-hiked the AT with a hammock. 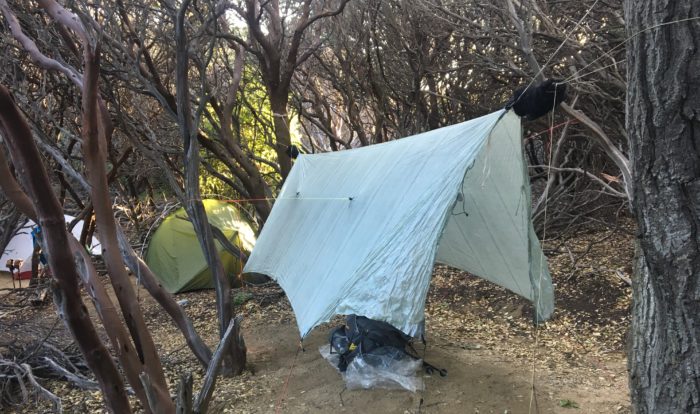 Nestled within the manzanitas at Casa de Luna.

Why Hammock on the PCT? 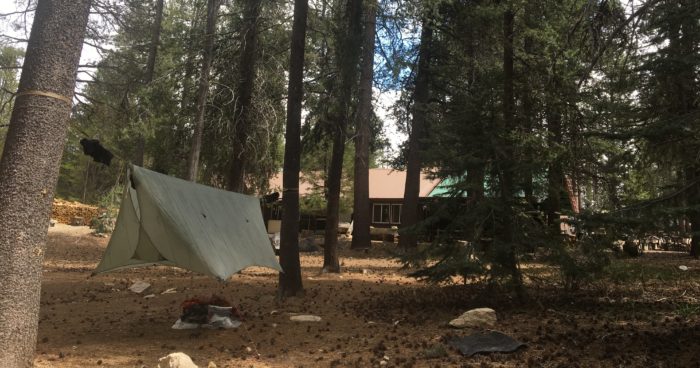 This choice was all about comfortmy hammock setup is heavier than a tent setup, even with a solid effort to trim the weight down as much as possible. However, every night I got to hammock more than made up for the extra weight carried. I opted to be ultra comfortable instead of ultralight, but it entirely depends on your preference. I am used to sleeping in a hammock, and find it preferable to being on the ground.

Hammock Camping Through the PCT Sections

The Pacific Crest Trail is generally split into several sections that describe the areas it travels through.  The sections include the desert, the Sierra, Northern California, Oregon, and Washington.

This section runs from the Mexican border to Kennedy Meadows at about mile 700.  It starts in desert chaparral and goes through full-on desert floor as the trail skirts the Mojave. The section finishes by climbing from the desert floor, gaining elevation to enter the Sierra. This section is known for long water carries, heavy wind, and rugged landscapes. I found less-established campsites in much of the desert compared to the rest of the trail as well.  Not surprisingly, it is not known for great hammock locations. More on this below. 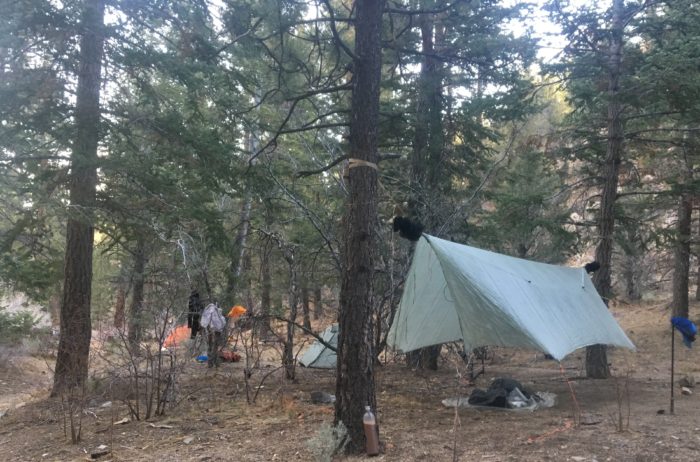 The Sierra section of the PCT is arguably the most scenic, as it goes over high mountain passes and takes the John Muir Trail through Yosemite National Park. Even at higher elevations with early-season snow, I was able to find hammock locations either at established campsites or by dispersed (stealth) camping where allowed.

The Northern California section stretches from Sonora Pass at mile 1,000 all the way to the Oregon border at about mile 1,700. It is full of forests with ample trees for hammock camping. Watch out for recently burned areas throughout this section.

Washington and Oregon make up over 900 miles of the PCT.  Besides the recent burn areas, this portion of the trail is prime real estate for hammock camping. Most of the established campsites even have hammock spots in them. Most of Washington has a thicker vegetation around the trail, so the best spots were usually beside or near established camp sites.

The Elephant in the Room: The Desert

Hearing the word desert makes you think of old westerns, with tumbleweeds blowing across sand.  While there are areas like that through the PCT desert section, there are also trees suitable for hammock camping.  However, when you hammock the PCT, I can just about guarantee you will be sleeping on the ground a few nights in the desert. I was able to hammock about 75 percent of the desert section, which was over my goal of 50 percent. Plus, I rarely had to stop early for a hammock spot.

Lets talk about how to prepare for the ground life on those nights you can’t find trees. 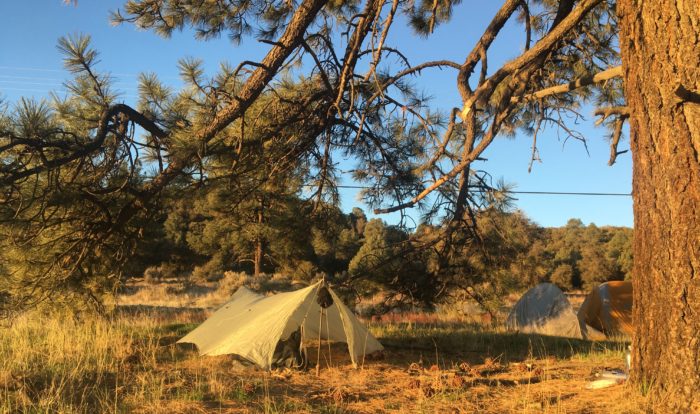 Ground sleeping waiting for Paradise Cafe to open the next day.

1. Have a tarp that can be set up on the ground
The Hammock Gear tarp has plastic triangles on the ridgeline tie outs, where trekking poles can be placed through for ground setup.  Carbon fiber poles or sticks (good luck) can also be used.

2. Practice setting up the tarp on the ground before the hike
This is a skill that many hammock users are not familiar with. Even with practice, the first time I set my large hammock tarp up on the ground was a challenging, long exercise in patience. Shug has a great video about going to ground with a hammock.

3. Bring a sleeping pad
The pad can be anything from an 1/8″ torso-length ultralight special to a full-length air mattress. For long-term hammock campers, a pad won’t feel as comfortable on the ground, but a nice mattress will make this experience bearable.  This can be the same pad used for bottom insulation in the hammock if that option works for the individual.

4. Bring a ground sheet
You can get creative with your rain jacket or pack liner, but the easiest option for me was to just bring a ground sheet. I carried a small piece of polycro during my hike, which  I also used to wrap around my backpack to keep it dry and prevent animals from chewing on the straps.

5. Remember that a tree wonderland awaits
A positive mental attitude goes a long way. Remember the section will end. It’s 700 miles of beautiful desert scenery, with a few mountains mixed in. As soon as you get to Kennedy Meadows you will be in areas that are much more suitable for hammock camping for the remainder of the trail. My percentage for hammock camping from mile 700 to 2,660 was 100 percent.

6. Shake down your pack
The extra ground-sleeping gear is going to raise the hammock camper’s base weight.  The challenge of hiking the PCT with a hammock is the perfect opportunity to look at your current gear list and trade for lighter options, or find things with multiple uses to eliminate unnecessary items.

How to Save Weight While Hammock CampingTips to lighten hammock camping setups.Read More

7. Be ready to hike longer days
Be ready to walk a little extra to find a hammock spot, especially in the desert. This is just the reality of being in the desert section with a hammock and trying to avoid ground sleeping. You could stop early at a good spot, but the desert is a great place to do miles in the late afternoon and evening, so getting extra miles to find a hang spot is win-win.  After all, finding a hammock spot is the perfect ground survival tip.

I carried a sleeping pad and my underquilt all the way to Walker Pass. I could have used the pad in the hammock while hanging but I find an underquilt to be so much more comfortable that the weight was worth it to me.  I started the hike using six sections of a  Therm-a-Rest Zlite foam pad.  I am a stomach/side sleeper on the ground, so the foam pad was not for me.  I upgraded to a short Therm-a-Rest NeoAir in Big Bear Lake, CA, and it was comfortable enough to use the rest of the time I had to sleep on the ground. Others had issues with getting holes in their air mattresses, but I put my pad inside my hammock so sand and other abrasions didn’t contact it directly.

Standard 11-foot hammock with bug net attached. I chose the 1.0 Hexon version, which is the lightest fabric choice I could find.  Dutchware makes excellent products right here in the US, and backs them up with excellent customer service. I reviewed this hammock here.

I took the continuous loops out of the channeled ends of my Half-Zipped and replaced them with the Button Link system. This system includes a soft shackle and eliminates the need to carry carabiners or other metal pieces for connection to the hammock suspension. This setup worked well for me and netted some small weight savings.

The tree strap system is a tree-strap-whoopie-sling combo weighs in at less than three ounces. These straps combine one-inch Dyneema webbing and 1,500-pound Spectra cord with a weight rating of 400 pounds. The built in whoopie sling adjusts to size for hanging.

If you want coverage at a light weight, a Cuben Fiber tarp is worth the investment. Mine provided protection from light precipitation on the PCT and days of constant rain on the AT in 2017. I had a few small holes develop in my ridgeline but this could have been due to over-tightening. I had this issue repaired while on trail for a good price, as Hammock Gear provides high-quality customer service for thru-hikers.

I used the Superfly Tarp for a 600-mile section in Northern California while tarp repairs were made. This tarp is relatively heavy but its coverage is awesome for the price and its very well constructed. I reviewed this tarp here.

How to Rig A Hammock Gear TarpWhat to do when you open up a brand new Hammock Gear tarp and realize that there are no guylines or rigging to attach it to trees or stakes? In the future, maybe Hammock Gear will offer a basic rigging…Read More

I stuck with the same Zpacks Carbon Fiber stakes for my second thru-hike that I used on the AT. They worked well on the AT, but I broke several stakes on the rocky PCT soil. I will most likely go with a slightly heavier metal stake for upcoming hikes. 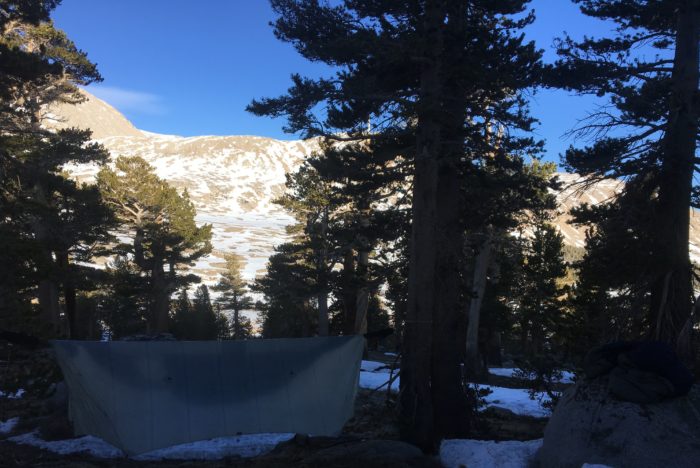 I used the 950 fill 3/4-length Phoenix for my entire hike. I added the foam pad from my backpack, an inflatable pillow, and my puffy to create full coverage underneath me on chilly nights. As long as the down was migrated evenly  and the suspension was adjusted properly, this quilt performed very well.

I used the regular-length, wide version with 950 down.  I am a warm sleeper and this bag was more than adequate to keep me warm even while hammock camping at 10,000 feet, in early season, and on the ground.  The only issue I had with this quilt is getting a slight draft in the footbox even with it cinched as tight as it could go.  Future gear purchases will include a quilt with a fully sewn footbox. 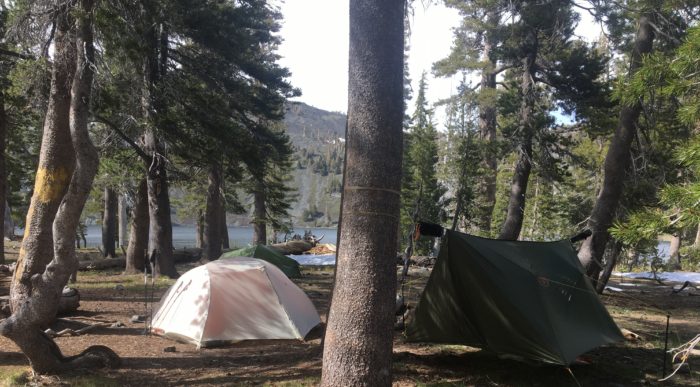 Hammock camping the PCT was challenging at times, but overall a great experience.  While I didn’t see many other hammock campers this season ( only three or four) I expect the numbers will increase.

Chris G.(Two Speed) is a native of the Blue Ridge Mountains in Virginia. He hiked the AT in 2017 and PCT in 2018 in a hammock. He is an engineer, thru hiker, hammock enthusiast, and avid gear DIYer.