Tahoe Rim Trail: I Couldn’t Hike 2,000 Miles This Summer, so I Did This Instead

The Tahoe Rim Trail is a 170-mile loop trail that loops around, well, Lake Tahoe. On a map, it looks like this: 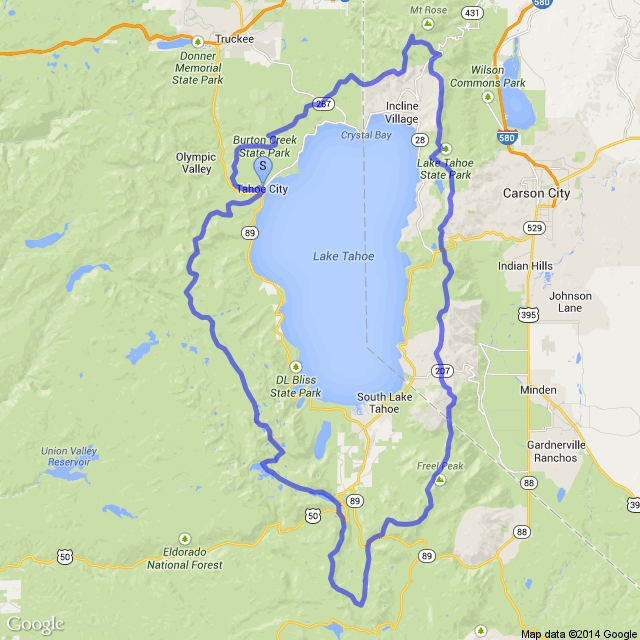 Through my inexpertly maneuvered smartphone camera, it looks like this: 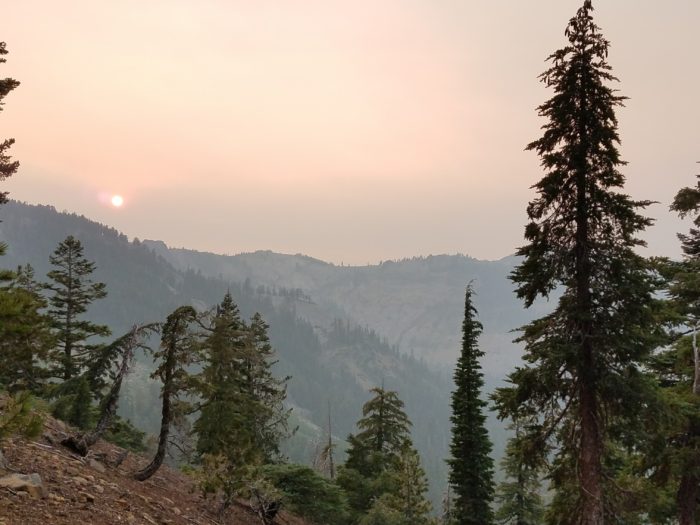 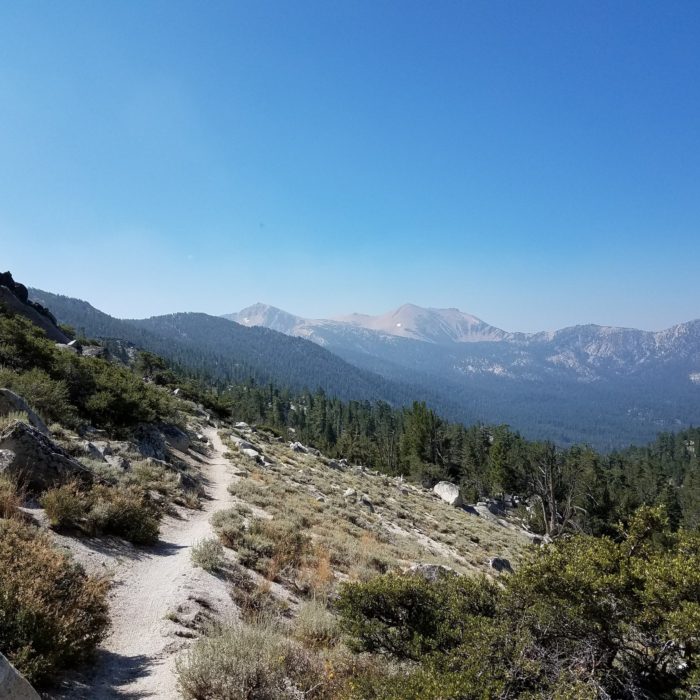 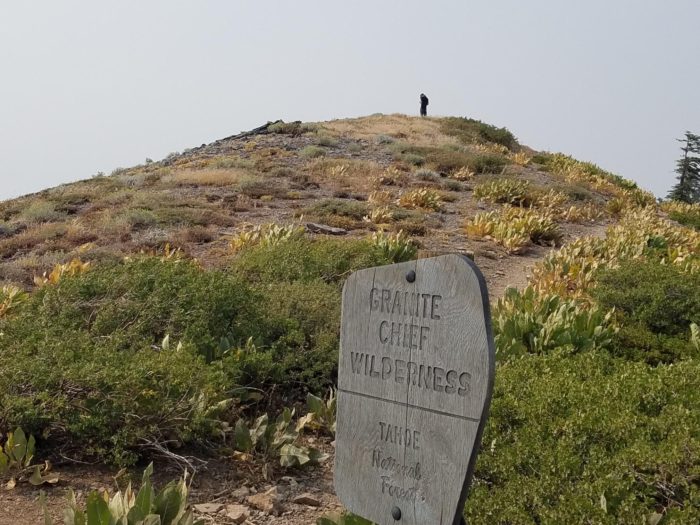 This is a lie. My mom took this picture.

At the end of July, I hiked the 170-mile Tahoe Rim Trail, starting in Tahoe City (next to a Chevron) and ending in Tahoe City (across the street from the same Chevron). To concerned purists, yes, I missed the width of that street. Here’s a not quick recap of the trail, which I give ten out of ten stars, and would hike again. 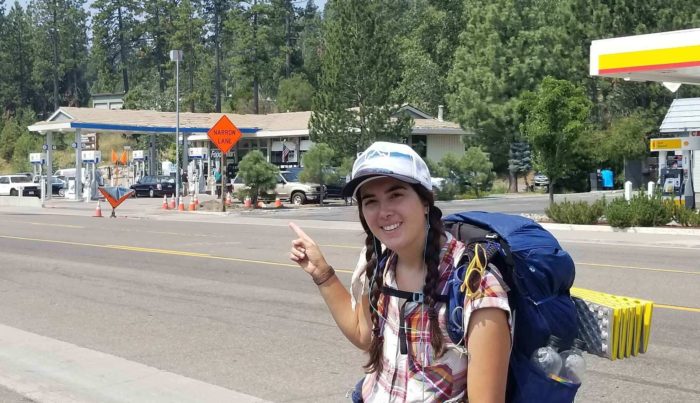 A lot of people I met told me they were hiking the TRT because it was similar to the JMT but doesnt include the logistical hurdles of the JMT, like the permit lottery. I do agree that getting the regulations handled was a breeze. All thats required is a $20 thru-hiking permit that can be acquired in person or through the mail. While Desolation Wilderness on the western side of the trail normally requires its own permit and for the hiker to sign up for a camp spot ahead of time, a thru-hiking permit overrides those requirements.

Fires are banned and the use of a camp stove requires its own (free) permit, which is acquired through taking a quick fire safety quiz. Dont be an asshole about this while California is on fire, which is looking to be now until the end of time. The trail includes miles in both California and Nevada. Dogs are permitted on the entirety of the trail, although the eastern side of the trail is home to not a lot of shade and even fewer water sources, making it tricky for all but the hardiest of dog/dog owner partnerships. However, I did run into a lot of very contented pooches on the trails western side.

I gave myself two weeks to hike the trail because that was the recommended amount of time in the TRT guidebook my mom had, and I did no thinking, math, or scheduling after reading that. My mom had originally planned to hike the whole trail with me (actually, she had just been planning to do it herself before I leeched on), but hadnt been able to get enough time off from work. Instead, she decided to spend a week doing a 65-mile section from Big Meadows trailhead to Tahoe City (going clockwise). My older brother, who also couldnt take more than a week off from work, decided to join her for that section, and my younger brother, who hasnt been backpacking since Boy Scouts, decided to hike the first 20 miles (or two days). If being able to make all that work schedule-wise seems unlikely to you, you have clearly never met my mother. 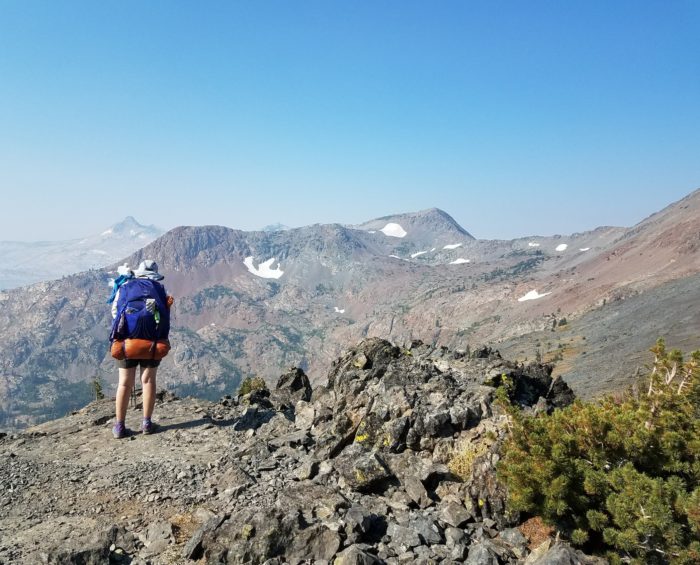 I decided to get there a week before everyone else to hike the first 105 miles solo, making the trip a total of two weeks for me. Two weeks for the whole trail would really be a stretch for many and impossible for a quick hiker; I dont consider myself fast and I still ended up getting to our rendezvous point a day and a half early while setting a pretty relaxed pace that included multiple days when I stopped hiking before 3 p.m. In the whole two weeks, I took two zeros, had three days when I stopped before noon and only one day when I hiked past 5 p.m. I would say ten days would be a more realistic schedule for someone not looking to push it.

Most hikers seem to take on the trail July-September based on Guthooks comments, with some hiking in June and October. June and early July hikers will probably run into some snow patches at the highest elevations and September and October hikers are going to find many water sources are running dry. 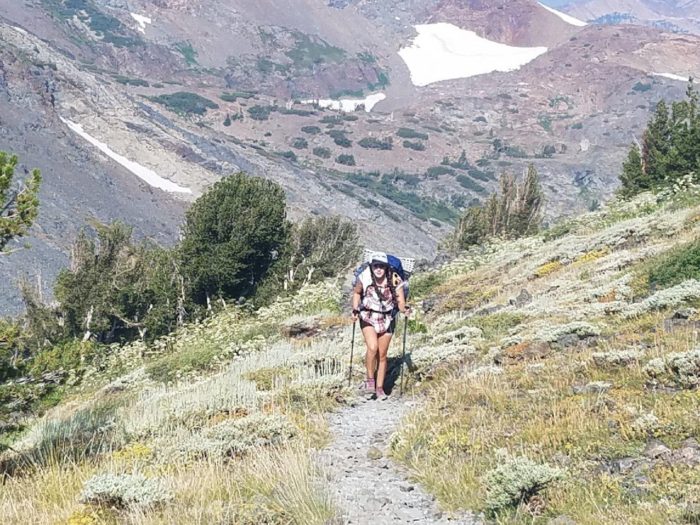 The weather can be summed up in the items I carried but never used. Beanie: never touched. Camp socks: came home clean as a whistle. Long underwear bottoms: never worn. Most days were in the high 80s and the nights were in the 50s, although temperatures can vary pretty drastically in the Sierra from year to year. The most challenging aspect to me, with the bulk of my backpacking experience coming from the AT, was long stretches above treeline in direct sunlight. Bring sunscreen. 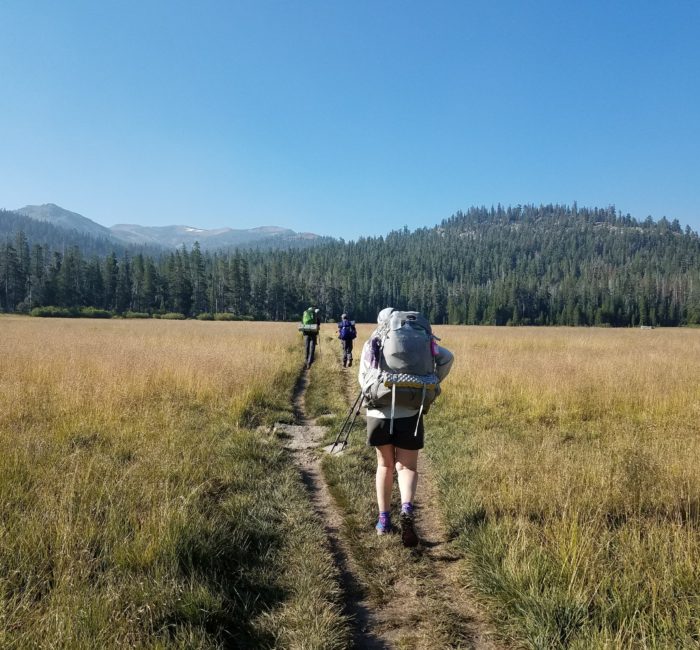 If the heat and lack of shade were my challenge as an AT thru-hiker, the terrain was the opposite. I hadnt totally realized the way the AT has drastically altered the amount of miles I deem reasonable to hike in a day. I cant tell you how shocking it was to sit down for lunch and realize I had already hiked ten miles. The grade was very gentle with miles and miles of switchbacks (So. Many. Switchbacks.) With the exception of Desolation Wilderness (which was very rocky), the trail itself was comprised of flat, soft dirt, which let you keep your eyes off your feet and on the views, which were plentiful.

Elevation ranges from 6,200 feet to 10,200 feet, which isn’t high enough to deal with any debilitating altitude issues, but is high enough to make you feel like you’re really accomplishing something when you get to Relay Peak, the trail’s highest point. 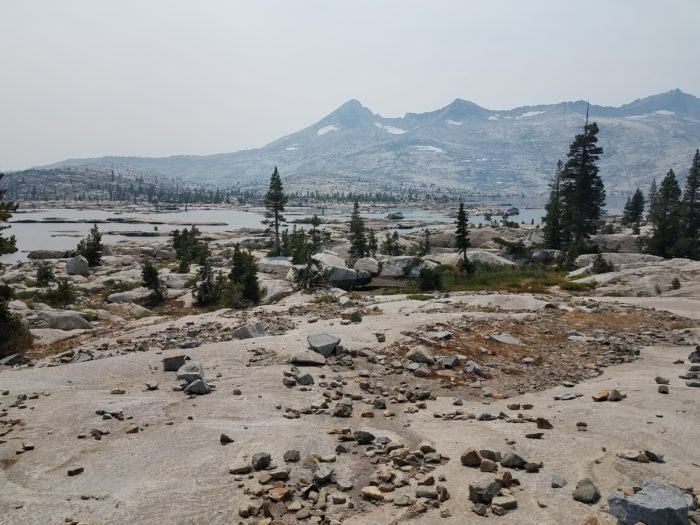 My biggest concern starting the trail was the water carries, as the trails eastern side is very dry. I would be starting right in the trickiest stretch, with a 13-mile carry my first day, a 17-mile carry my second day, and eventually, as everyone wanted to tell me, a 36-mile carry. I stayed in Tahoe City one night before I left, and all the locals I talked to reminded me about this carry. For the record, that 36-mile carry is a lie. Fifteen miles into it theres a campsite right on trail with a water spigot available to all and ten miles after that, a 1.4 mile side trail will take you to Spooner Lake picnic area, which has a water spigot AND bathrooms, trash cans, and power outlets, making it an obvious lunch stop. The longest actual carry is 17 miles. By the time you get to the trail’s western side, the script has flipped and there’s endless water, including multiple lakes, all of which you should swim in. 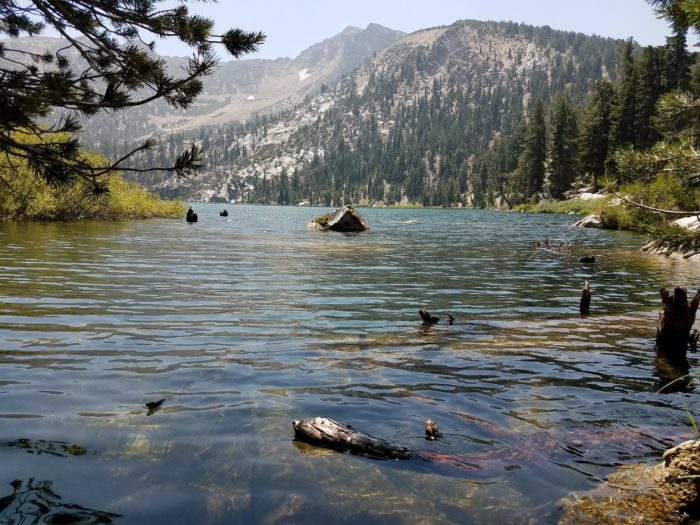 A couple of hikers I met had stashed themselves water at one of the trailheads or had chosen their starting spot specifically to break up one of these carries, which are all solid strategies, but I got by fine without doing any of that. The most water I carried was four liters and I got through all of them without running out, although holy guacamole, is four liters of water and 100 miles of food heavy. Speaking of food

There are a tons of trailheads along the trail, all with cell service and Lyft availability, so you can have your pick of resupply options. The trail goes near many towns, including Kingsbury, Stateline, and South Lake Tahoe, which are all reasonable resupply points. The Tahoe Rim Trail Association has a list of nearby post offices here. Tahoe City is the only town the trail actually crosses through, and it does so less than a quarter mile from a grocery store, which is why smart people dont start in Tahoe City so it can be used as a resupply point. A lot of duos or group hikers drive separately and leave a car at a pre-planned trailhead, since almost all of them allow long-term parking. It should be noted that all of these trailheads recommend you dont leave food in your car because of bears, so the car should not be used as storage and instead as transportation to wherever you do plan to get your resupply. Related to that, bear canisters are very strongly recommended, so whatever food you bring and send to yourself should be able to fit inside your bear canister.

By AT standards, I didnt meet that many other thru-hikers. Most of the thru-hikers I did meet were, interestingly, going it alone. Most people seem to do it in two chunks, since its just a smidge long for the average person to get the right amount of time off work. Aside from thru-hikers, the rest of the trails occupants were comprised of:

-Bicyclists: About half of the trail is open to dirt bikes, and man do people love their dirt biking up there. I saw more of them than any other kind of human.

-Day hikers: If I had one complaint about this trail, its the uncomfortable combo that results from two things: 1. Certain sections of trail are flooded with an endless stream of day hikers on vacation. Because they are on vacation, it means they are there weekend or weekday and they are from out of town and not that familiar with the trail itself. Combine that with: 2. To mitigate the effects of dispersed camping on the trail’s ecosystem, backpackers are expected to camp within 300 feet of the trail corridor, which means youre right up on the trail. Neither of these things is an issue on its own, but I challenge even the most proud hiker trash to not feel self-conscious as a family of 17 walks past your tent ogling you like a zoo animal as you try to eat dinner. Add to that the fact that they walk by at all hours of the day and night, Id recommend choosing to camp far, FAR away from trailheads.

-PCT hikers: About 50 miles of the trail’s western side lines up with the PCT. While earlier hikers probably run into lots of NOBOs and later hikers run into lots of SOBOs, we only met a couple of straggling NOBOs who had decided to flip when they got to the halfway point. 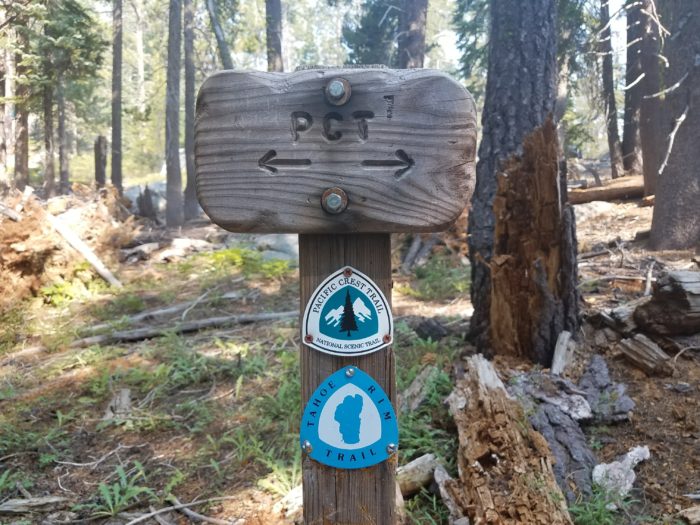 I really enjoyed this trail, and I’d strongly recommend it to backpackers of all abilities. I met a couple of hikers using it as a practice run for a longer hike, which I think makes perfect sense given its relatively easy terrain and its many possible bailout points if you happen to get in over your head. I was really impressed with how well-maintained the trail was (shout-out to the TRTA and its volunteers) and all the locals I came across were so enthusiastic about the trail and pleased to see people hiking the entirety of it. Beyond that, I loved how much variation I saw, which made me feel like I had somehow hiked 50 miles in a day. If I was still giving out fudge stripe cookie ratings a la my AT days, I’d give it nine out of ten fudge stripe cookies.

The Tahoe Rim Trail Association website is incredibly thorough and helpful if you’re looking to hike the trail. It’s here.

For another take on the TRT, Jim Rahtz did a great write-up for The Trek here, which includes more information in fewer words.