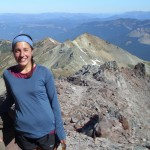 Arguing. All couples do it, fewer admit it, and even fewer like to talk about it. My partner Bear Sweatz and I tend to have healthy arguments off the trail, but in the backcountry we’ve had more than a few dramatic ones. The combination of spending nearly 24/7 together, lacking calories, and making every decision as a twosome can start to wear on even the most solid relationships. If you’re planning a hike with your significant other, taking some time to plan how you’ll deal with disagreements is a worthwhile pursuit. So in the interest of keeping couples everywhere happy on the trail, I’d like to share the worst fight we’ve ever had and what we should have done to prevent it.

We had ten miles before we arrived at Timberline Lodge on the PCT. Along with sitting in the shadow of Mt. Hood and serving as the exterior of the inn in The Shining, the Timberline Lodge allegedly serves the best breakfast on the entire PCT. Bear Sweatz was recovering from being ill and was excited at the prospect of putting his AYCE thru-hiker skills to work by polishing off as many plates of waffles and bacon he could muster to put on some pounds. 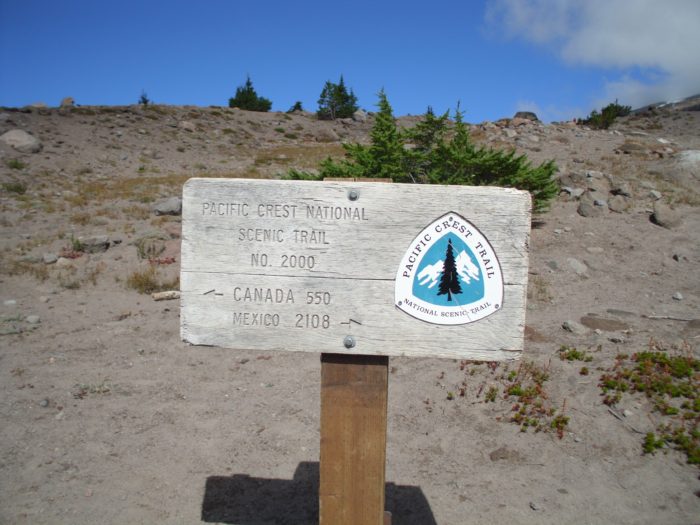 “Don’t you get tired of each other?” people ask. Yes, apparently after 2108 miles.

We were hiking faster that day than anticipated and realized wed be getting in mid-afternoon, rather than after dinner. I realized if we left early the next morning, wed make it to Cascade Locks to take a zero on my birthday. There are some campsites near the lodge, so I casually suggested that we pitch camp and instead eat dinner at the lodge (not AYCE), and then skip the buffet the next day. And cue the biggest fight weve ever had.

What did we fight about? He accused me of changing our plans without consulting him, and I felt like he wasn’t being sensitive to the fact that I’d been homesick and wanted to be in cell phone range to talk to my family on my birthday. And from there, it escalated into a cascade of irritations we each had with one another. At one point, I sat down in the middle of the trail and told Bear Sweatz to keep hiking, because I couldnt stand to be around him. He huffed off, and eventually, I picked myself up and resumed walking. When I saw him on the side of the trail a couple miles later, I turned the jets on and passed him. Needless to say, this is not a healthy way to communicate. He caught up, and we hiked in silence until we saw Mt. Hood which changed our mood for the better.

It started as a simple disagreement, so why did it become our biggest fight? We were both hungry and tired. Neither of us was listening to the other. We both felt passionate about what we wanted to do (an AYCE buffet can do that to hiker-mind). Due to slowing down our pace from him being sick for a couple weeks, we had started to worry if wed make it to Canada before the snow. The argument ballooned into something more significant as we started pulling out other frustrations we had with each other. Plus, a dog ran up to us at lunch that day and licked the inside of our peanut butter jar which didn’t help matters.

In the end, we ate dinner and stayed for breakfast and still made it to Cascade Locks to zero on my birthday. We’ve had a handful of these fights on our long distance hikes. A seemingly unimportant decision turns into a stupid fight where one (or both) of us finds ourselves asking, why are you acting like this? 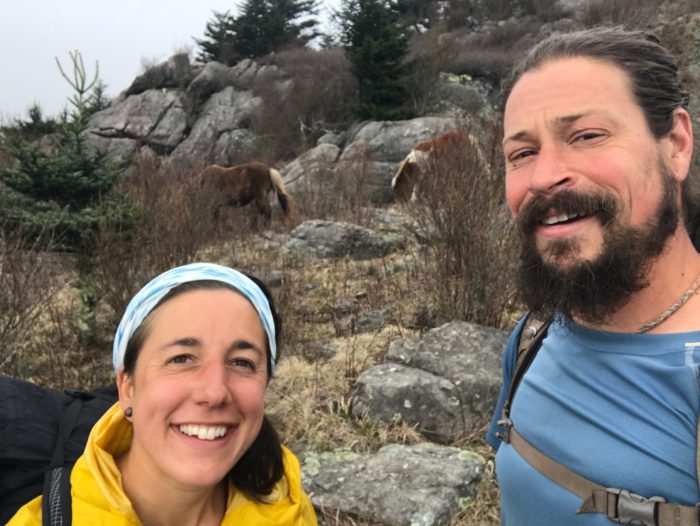 Us having a great time.

99.9% of the time were having a great time. So why worry about the 0.01%? Call it an ultra-light mentality, but I already try to reduce what I’m carrying on the trail and I certainly don’t need the weight that resentment brings. Fighting in a relationship is destructive; the very term suggests that at the end there will be a winner and a loser.

So, how to keep disagreements from turning into fights? Since that infamous Mt. Hood argument, we’ve worked on our communication. Here are some lessons weve learned throughout our thru-hikes of the AT, the PCT, and multiple backpacking trips in between.

Trust in Your Partner

If you don’t trust your partner, you shouldn’t be attempting a thru-hike with them (uh, you probably shouldn’t even be in a relationship- but that’s a whole other story). Thru-hiking requires a commitment to the trail and to each other. Remember this when the going gets rough. Trust that your partner is doing the best that they can in the given situation. The two of you are a team out there, and you’re going to continue hiking with each other. Sometimes in a fight, it seems like you’ll never agree on anything again, but trust that you will. This argument is only temporary, and you have plenty of greener miles ahead. 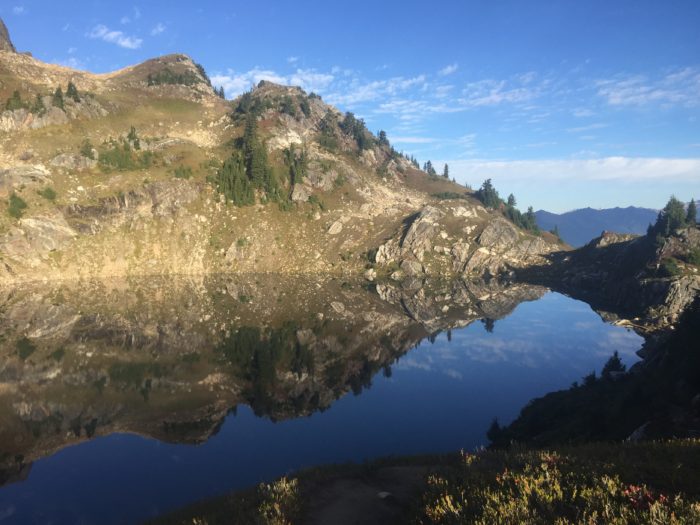 And I mean really listen. If your partner brings up an issue, do not brush them off. Address their concern and let them know that you heard them. While we were arguing about breakfast vs. Cascade Locks, neither of us took the time to reassure the other we understood what they were saying, which helped the conversation snowball into a fight.

We should have taken a timeout. And while we kind of did, I could have done better than refusing to hike any further. Now whenever one of our arguments starts to escalate, we make a concerted effort to stop the madness and cool off before continuing our discussion.

If there is something that is bothering you, bring it up. The more you let it incubate, the harder it will be to keep it in. You should be able to talk about your concerns, and your trusting partner should be able to listen. By holding frustration in for too long, it makes it difficult to not have it erupt at the wrong time.

Time and Place are Everything

There are some pieces of trails that lend themselves to long talks; and others that don’t. Consider if its a good time to address the problem with your partner. Are they in a good mood? Have you both eaten recently? Are you balancing on a knife edge? 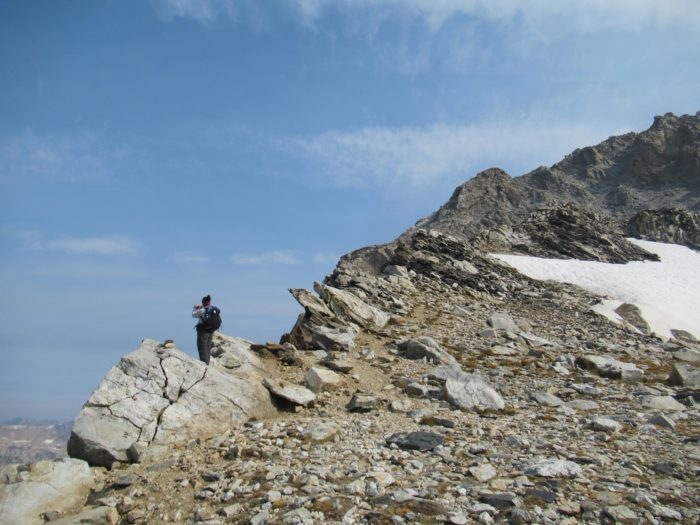 Time to enjoy the view.

On the AT we found that camp was often an excellent time to talk about any lingering issues, and would make a point to set-up away from a shelter area so we could have the privacy needed for discussion. On the PCT we ate dinner, then hiked until we were ready to sleep; so instead, found our afternoon siestas a better time to make plans and consider more significant issues.

After an argument, well try to revisit what went wrong and what went right. Not immediately after, but sometime soon. Weve had fights that have ended and later one of us will bring up just why we were so upset. It helps troubleshoot for future discussions.

Remember Why Youre on the Trail

Being able to attempt a thru-hike with your significant other is a tremendous opportunity for growth as a couple. We feel lucky to have found each other and take on these adventures. That nasty fight we got into before Timberline Lodge was finally broken up by the majesty of Mt. Hood looming ahead. I just wish we had been able to enjoy the previous ten miles as well. With some practice, were getting better at keeping disagreements as discussions and enjoying all of our time together on the trail. 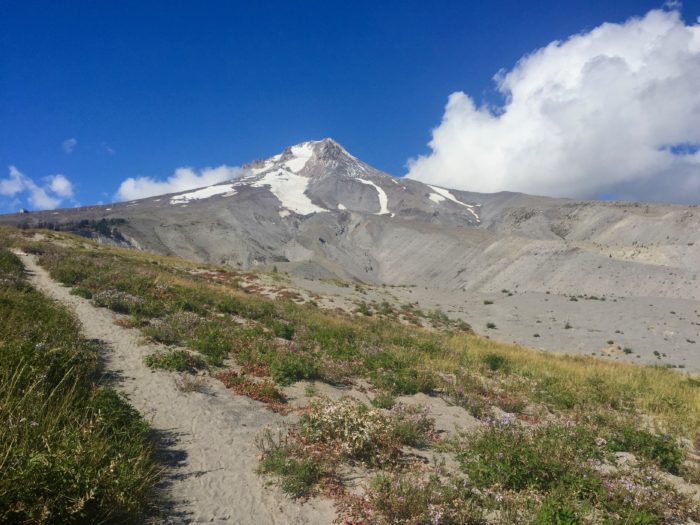 I'm known as Amy off the trail, and Tuff Broad on the trail. I hiked the PCT in 2016, and the AT in 2017. Hiking helps me take myself a little less seriously, makes me grateful for these legs of mine, and reminds me how much I like Cheetos. I could eat macaroni and cheese every day. If you'd like to read about what other foods I like, and the trails that I've hiked, you can read more at my personal blog http://www.cookingscraps.com.