Hiker Box Diaries Episode 7: Halfway To Heaven And Just A Mile Out Of Hell

Here is an update on the past 100 miles. After taking a week off the trail, I got back on the PCT at Walker Pass (mile 652). Poobah and I hiked 50 miles in two days through the previously closed area of the trail. The trail was the most challenging yet. There was pointless ups and downs, deep beach sand, and temperatures scorching us at over 100 degrees! Water was scarce and we were practically filtering mud at Spanish Needle Creek. The second day out of Walker Pass, we pushed to make Kennedy Meadows General Store before they close at 5:00pm. The 26 miles were terrible. Deep beach sand followed a 2,500′ climb as we plunged to the desert floor. I drank 8.5 liters of water by 3pm and it was as if I swallowed not a drop. My mouth was dry and my throat raw. Desire for a cold beverage drove me to reach the Kennedy Meadows Store at 3:30pm, with XC and Poobah. We were greeted with applause from the hikers already on the porch. Over 700 miles of desert in my back pocket. No more deep beach sand. No more drinking hot water. No more ass chafe (for a while I hope). No more waking up at 3am in effort to evade the blistering midday sun. No more carrying 8lbs of water. 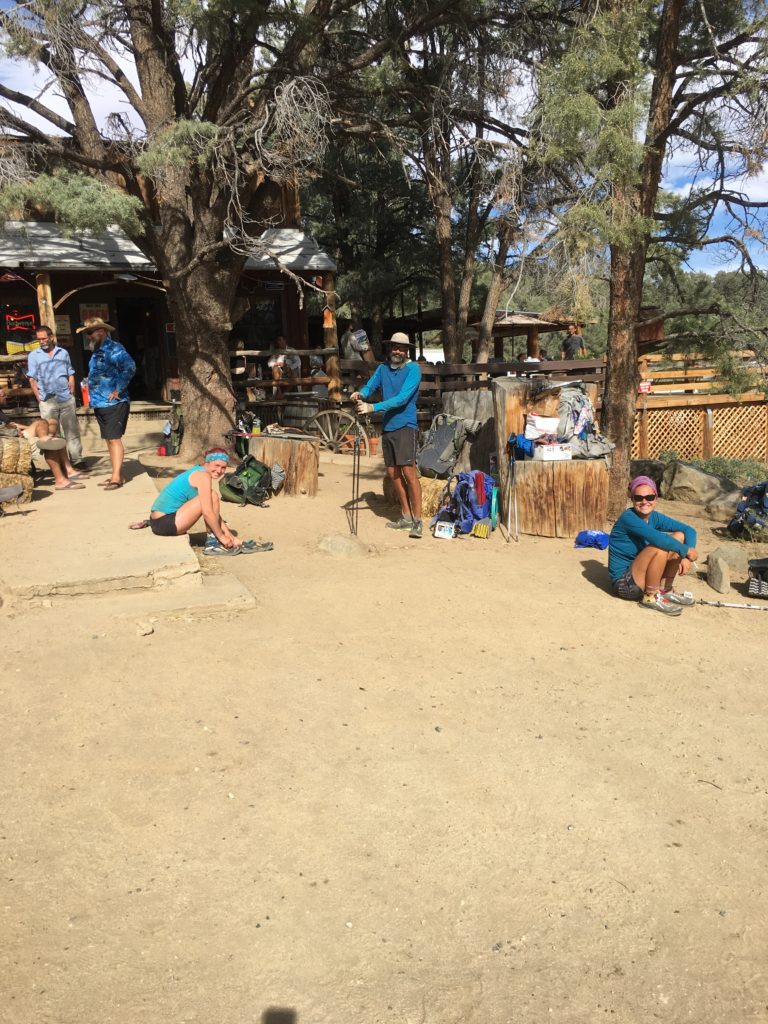 The General Store was a good time. Hikers hang out on the porch all day and celebrate the first victory of this long journey. There is a good hamburger stand, that wasn’t terribly overpriced. The store wasn’t very well stocked, though. There wasn’t gear of any kind, outside of the bear canisters they sell. There was little on the barren, dark shelves and the mail drop retrieval system was marked by frustration, delayed wait times and disorganization. After readingCheryl Strayed’s elaborate descriptions of Snapple Lemonade in Wild, I expected one here. They carried only flavors of Snapple offered by discount wholesalers. Weird, discontinued varieties. The overfilled portable toilets offered a unpleasant aroma to the area. This only offered minor distraction from the absolute joy I had being finished with the desert. After a hot shower, I spent the night in a teepee on the property. 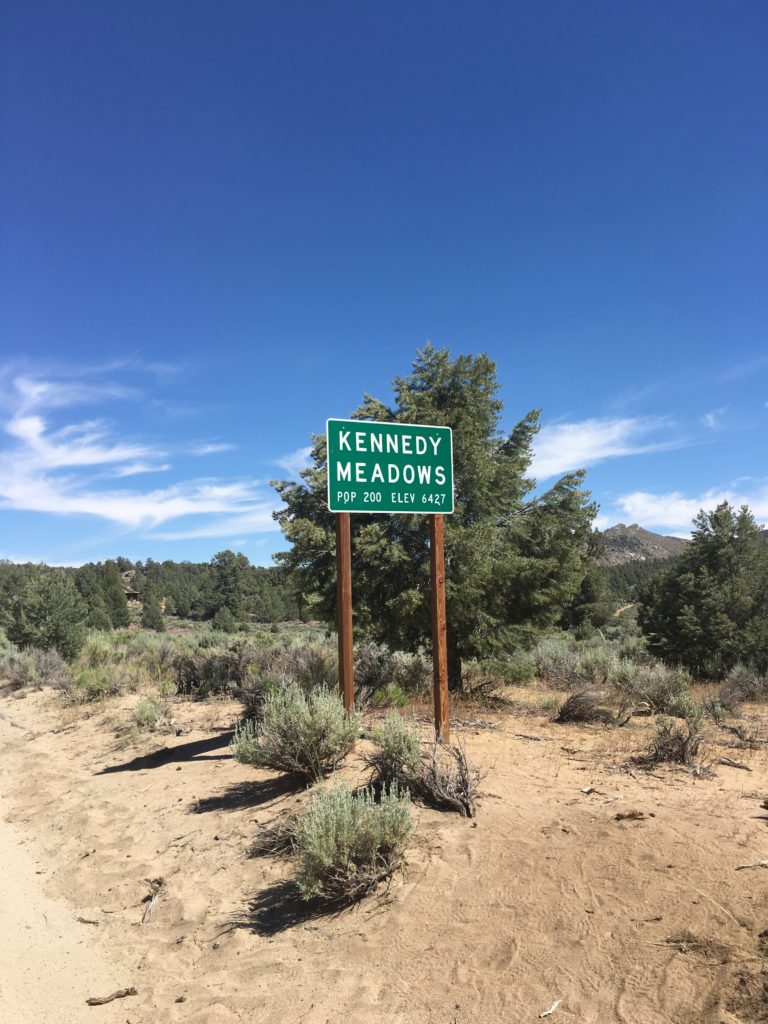 The following day, I headed out at sunset with Poobah, Frost and Bingo into the Sierra. Over the next three days we explored the most beautiful scenery the PCT had to offer thus far. Sequoia’s and Ponderosa Pines lined the trail as we passed giant meadows and climbed to fantastic vistas of the snowy peaks in our future. We ascended 5,000′ over the next couple of days arriving at our first alpine lake, Chicken Spring Lake in the mid afternoon of the third day. At 11,200′ the lake water was near freezing, and the temperature dropped when the sun hid behind ominous grey clouds in the afternoon. I secured my Zpacks Hexamid tent as best as I could to ensure stability in, what I thought, would be a possible overnight rain.

Over the next eight hours our campsite endured near constant lightening strikes, occasional hail stones, and then a little bit of rain, followed by an overnight snowfall. The light flashed on the ceiling of my miniscule Zpacks tent all night as if I were in a discoteque. The trekking pole that propped up my tent rattled against the stiff alpine winds. I slept and awoke. An hour for an hour. I tried to distract my mind from my impending doom, by listening to my headphones. I would intermittently shut off my phone because my imagination would drift and I’d convince myself that listening to music would actual attract lightening.

When I left my tent in the morning, I was pleased it held up through the night. The walls had caved in considerably from the three to four inches of snow, but it still stood. The same could not be said of Frost’s tent. Her walls were so sunken that it seemed she were a giant burrito. 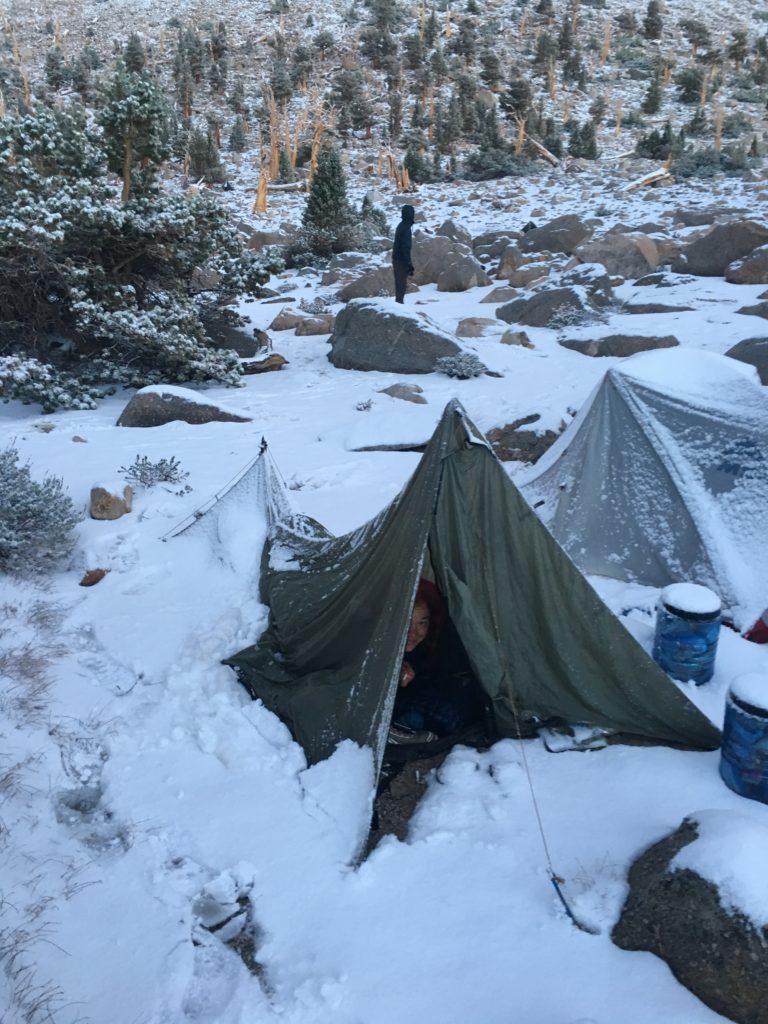 Her troubles aside, the scenery was breathtaking. Snow blanketed the trees and rocks and ice covered the shallow parts of the lake like a cloudy glass. We took a few minutes to take it all in. Some of the group needed to get to town to get a bear canister required for further travel into the two National Parks that lie before us (Kings Canyon and Yosemite), so we descended down to Horseshoe Meadow and escaped the sudden winter landscape to the town of Lone Pine. Here we will regroup before further tackling the High Sierra. 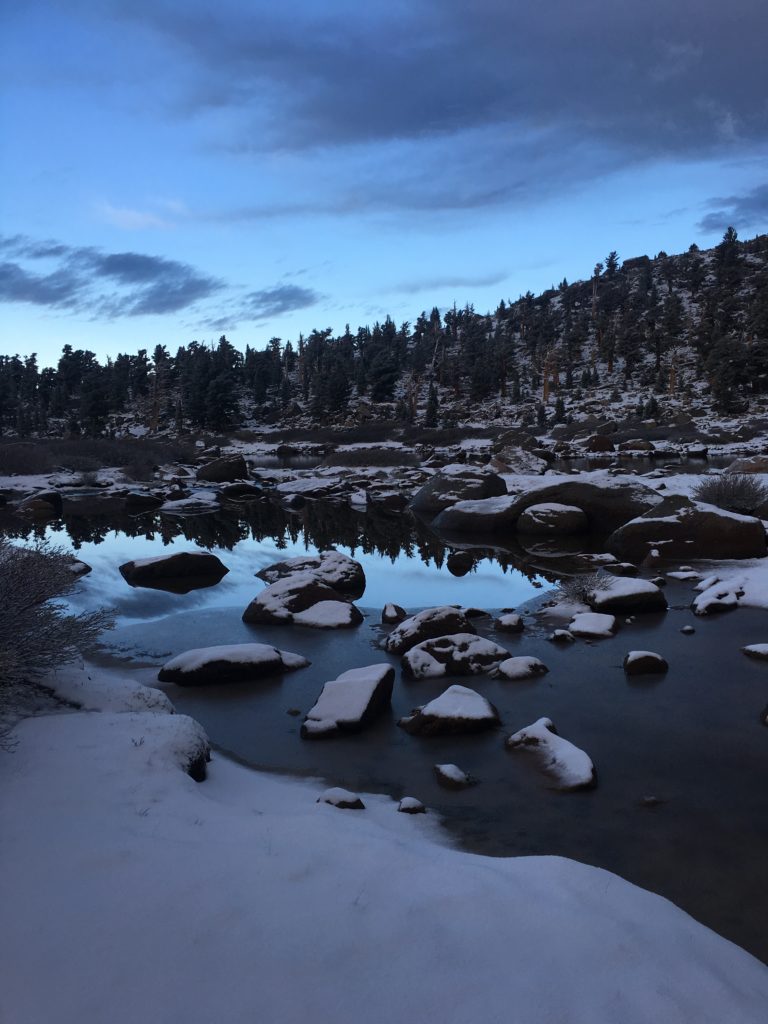 -Yellow blazing is rampant on the PCT. It’s so pervasive that it is hard to find the folks who don’t engage heavily in it. I thought it would be harder to find on this trail than on the AT. It’s not.

-I think a lot of people drop off the trail at the end of the desert.

-Kennedy Meadows General Store should have twice the portable toilets of Hiker Heaven, not half.

-Virtually every bad decision I have made on a trail involved proceeding up a mountain despite ominous clouds upon me. Yet I do it time and again. Dummy.

To somewhat explain what I did while off trail for a week.