Length: 170 Miles
Location: Encircling Lake Tahoe through the Sierras in both California and Nevada.
Trail Type: Loop
Scenery: The trail has daily mountain views, numerous small alpine lakes, and countless views of the largest alpine lake in North America. The path often passes through open forests consisting mainly of various pines, firs and occasional aspen. Much of the trail is in National Forest or one of three Wilderness Areas. Desolation Wilderness is aptly named as a glacier once scraped most of the soil from the area and left the terrain beautifully stark. 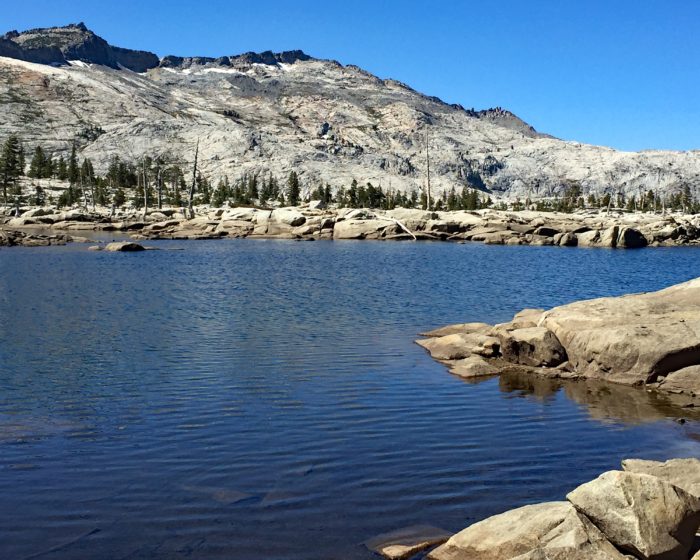 The hiking would be considered moderate. You are walking through the Sierras, so theres some considerable up and down. However, unlike the more famous John Muir Trail in the same range to the south, the elevation change is less dramatic. Tahoes shoreline is around 6,300 feet and the high point on the trail tops out at 10,330 feet. The tread is well constructed with switchbacks and even steps on the steeper sections. I spent eleven days on the trail including one zero in South Lake Tahoe.

The trail is extremely well marked, easy to navigate, and rarely confusing. Signage is ample and well located. On the trail I used the Tahoe Rim Trail Pocket Atlas  by Blackwoods Press and the TRT phone App by Guthook. Both appeared to be accurate and contained all needed intel.

There are two cities on the trail, Tahoe City and South Lake Tahoe. The closest major city is Reno, NV. From Reno to Tahoe City, take I-80 West to CA-89 South. The trail crosses CA-89 near the south end of town. I walked the approximately half mile between the trail and the hotel I stayed at.

Traveling from Reno to South Lake Tahoe, the best route is US-395 South to US-50 West. I took Rt #23 bus from the Transit Center (Downtown Stateline on US-50) to the Kingsbury South (or Stagecoach Lodge) Stop. From there, a half mile side trail takes you to the TRT.

In addition, there are regularly scheduled shuttles to either town straight from the Reno airport.

On every trail I hike, I end up with a song playing over and over in my head. On the TRT, the obvious choice was Roundabout, released by the English rock group Yes in 1971. This could be the official tune of the trail. Not only did the title match the route, but the lyrics did too. As I hiked, In and around the lake, mountains come out of the sky and they stand there. Multiple times I passed, In and out the valley. 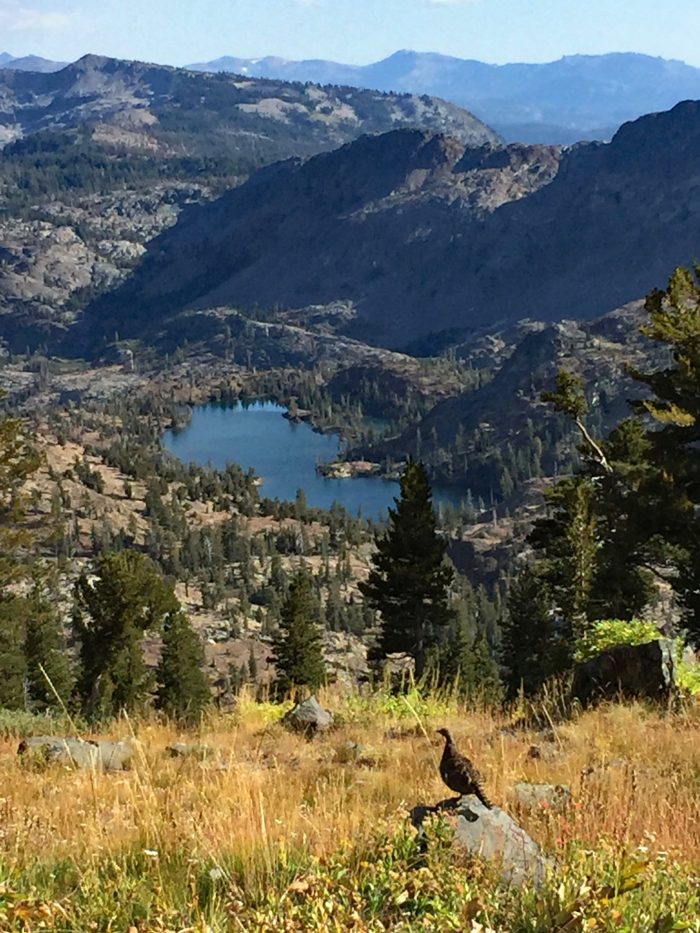 Regardless of your musical tastes though, this is a great shorter long trail; especially for a first time thru-hiker. Logistics are simple; you finish where you start. The two best resupply options, Tahoe City and South Lake Tahoe are close to equidistant and easy to reach. Permits are simple. The California Campfire Permit needed to operate a stove on the trail is free and can be had by passing a straightforward Internet quiz. (Dont plan on an actual campfire though.) For thru-hikers, there is no quota for Desolation Wilderness Permits. I got mine with a phone call and $10. (Call two weeks out.) On top of that, its just a beautiful hike on an easy to follow trail.

John Muir described the Sierra Nevada as the gentle wilderness and the summer weather can be just that. Generally the trail is hiked Mid-July through September and the area averages about 2 inches of rain total during that entire period. I walked the trail over ten days in September and there was no rain and maybe 20 minutes of cloud cover during my entire hike. Bring sunscreen. At the elevations on the trail, the temperature is likely to go below freezing during any month of the year. I carried a 23-degree bag and was glad I did.

One note of caution for 2017. This past winter the area had the highest snowfall total in 35 years. As I write this, significant parts of the trail are covered with 10 feet or more of snow. The hiking season will most likely start late.

One of the interesting rules about the TRT is that camping somewhat near the trail isnt discouraged, its actually required. All camping must be done within 300 feet of the trail corridor. That doesnt mean there is a shortage of sites however. The Guthook Guide lists well over 100 spots to set up one or more tents. With that many options, finding a spot to camp was not an issue. On my trip, only once did I set up within sight of another tent; and they were on the opposite side of Dicks Lake. 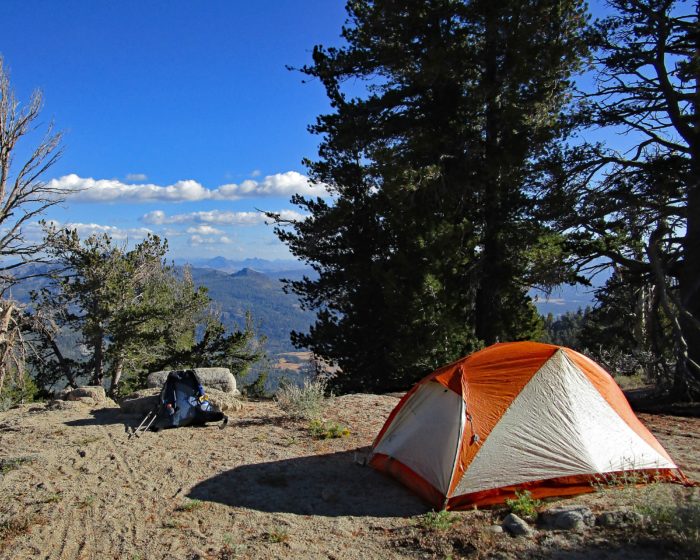 One issue is that within Lake Tahoe Nevada State Park (Mile 48-63.5) hikers may only camp at one of three park camp areas. I avoided the situation by hiking through the park in one day.

Despite the fact that the trail circles a Big Ol lake, dont expect to be able to dip a cup in it whenever you want. You are rarely that close. The east side of the lake is significantly drier than the west side, but no dry stretch was extraordinarily long. By making use of a campground hydrant and going off trail for water a couple times, I never went over 14 miles between water stops. The west side of the lake had several small lakes and even some snowmelt; despite being Mid-September during the drought. Other than the hydrants, I did filter all my water. I consider it cheap insurance. 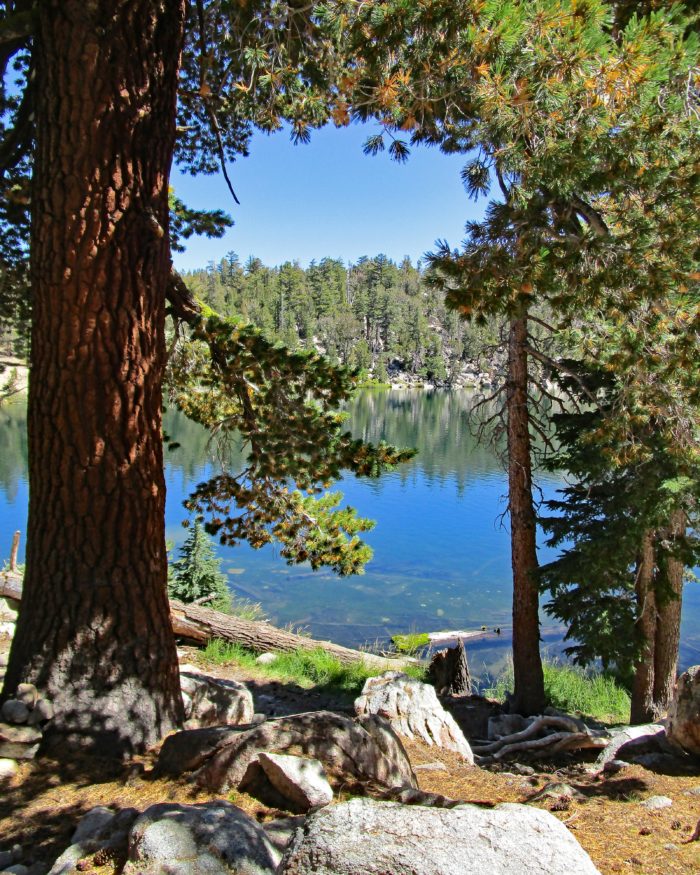 While there are additional options, the simplest plan is to start/finish at either Tahoe City or South Lake Tahoe and resupply at the other. You then have either 80 or 90 miles to cover between stops. Each section took me four and 1/2 days, getting to town by early afternoon on day 5. Both towns have post offices handy to hold a package. Or, in my case, I planned a zero in South Lake Tahoe and made a reservation at a hotel which also held a package for me (and had a laundry and a $2 happy hour!) Tahoe City is on the trail and South Lake Tahoe can be reached by either a steep walk on a busy road or a $2 bus. Take the bus. By starting at a trailhead between towns, one of the walks between resupplies could be cut into two.

A word of caution: Bears are in the area and good spots to bear bag your food can be few and far between. I solved that issue by using a bear canister. 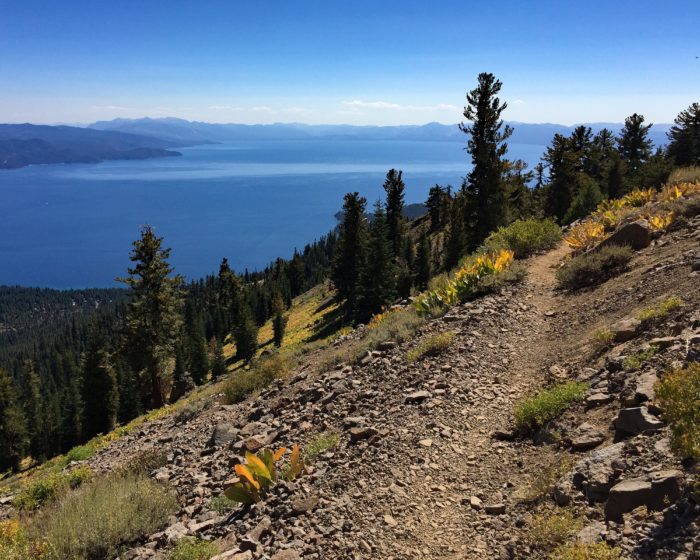 The TRT is a great hike for newer long-distance hiker, someone trying solo hiking for the first time, or anyone that wants a great scenic hike with a minimum of logistical issues. The bureaucratic hoops were relatively easy to deal with as well. The folks at the Tahoe Rim Trail Association were very helpful and their website is a great planning resource. Update: January, 2018 If you’re looking for additional information beyond that, I’ve just published a short book about my journey. Walking in Circles: Backpacking the Tahoe Rim Trail is available in both paperback and e-book on Amazon.

For those that want to hike the John Muir Trail, but have been unable to get a permit, this would be a great replacement hike for you. Fair warning however. You will be singing Roundabout to yourself the whole way “around the lake.”